... for reviving the Arvari river, for showing that a healthy ecology and good water management mean prosperity, for proving that drought is a myth 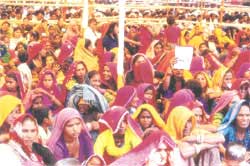 it was an event the villagers of Alwar district will not forget in a hurry. Four helicopters, numerous vehicles, a posse of policemen and 30,000-odd villagers had gathered in Hamirpura village in Thanagazi block of Alwar to welcome India's first citizen. And savour the fruits of their hard labour. The first citizen, on his part, was to felicitate the villagers for their work in the field of environment.

Befitting the Rajasthani tradition, Hamirpura, the venue for the function, was decked in colourful shamianas , spilling with people. Some 10,000 of them were in the helipad alone. Huge makeshift gates welcomed the guests to the venue. And notwithstanding the policemen, the villagers started trickling in from early morning resplendent in their colourful clothes and traditional jewellery. After all, it was a special day. The President himself was present to put the stamp of personal and governmental approval on their remarkable feat.

In fact, even before the President's visit, the Arvari Parliament had distributed leaflets saying, "The President also supports our struggle for rights on water". And finally on March 28, 2000, all their efforts were given official recognition. Amid a loud applause, the President presented the first Down To Earth-Joseph C John Award for the most outstanding environmental community to Bhaonta-Kolyala. The award - which carries a citation and a cash award of Rs 1,00,000 - was received by seven villagers, including two women, on behalf of the Bhaonta-Kolyala community. Bhaonta-Kolyala, along with the 70-odd villages in the Thanagazi block, were facing chronic drought, distress migration and poverty in the mid-1980s. But after a chance meeting with members of the Tarun Bharat Sangh, a voluntary organisation, they took upon themselves the task of restoring their traditional water harvesting structures called johad s. After decades of sand, heat and infertility, the area has discovered perennial water, prosperity and abundance.

"While it is the responsibility of the government to create a situation where people can develop, it is up to the people themselves to work for the development of true gram swaraj (village republic). Bhaonta-Kolyala and its surrounding villages have shown how people can do this on their own," said President Narayanan, after presenting the award.

Pointing out that as much as 75 per cent of the cost of building johad s was borne by the villagers, the President said the initiative and self-reliance of the people of Bhaonta-Kolyala is an inspiration and has established an example for the rest of rural India (see box: Presidentspeak ).

Also present at the function were Rajasthan governor Justice Anshuman Singh and chief minister Ashok Gehlot. Speaking on the occasion, the governor lauded the efforts of the villagers and Tarun Bharat Sangh. He said that their effort in reviving the traditional water harvesting system is especially noteworthy given the fact that in Rajasthan there are still 26,000 gram sabha s facing drought.

"The President's visit will provide great encouragement to environmentalists in the state," said Gehlot. He also stressed the need for utilising modern scientific and technological inputs like data from the Remote Sensing Centre, which had come out with a Watershed Development Atlas, to find out where to build water harvesting structures. "If all the villages in the country worked on rainwater harvesting, the state of the entire country can be changed. With the help of institutions like the Centre for Science and Environment (cse), villagers should be made all the more aware of such benefits," he added.

Expressing gratitude towards the President for accepting the invitation to come to Hamirpura, cse director Anil Agarwal said that if rainwater harvesting is undertaken all across Rajasthan like it had been done here, a lot of poverty in the state can be eradicated in the coming 10 years.

For this day no sacrifice seemed big enough - not even walking miles without food. Govardhan Sharma, a resident of Jhiri village, skipped his lunch. "The President is coming," he reasoned. He walked a distance of seven kilometres with his seven-year-old grandson to reach Hamirpura. "Now even the Rashtrapatiji supports our struggle to get rights over the water we conserved," he says. Recalling a dialogue with state irrigation officials over the construction of a johad in his village, he says, "The official threatened that I would be killed if I don't listen to government orders." However, now that the President himself had come to acknowledge their effort, he has put off the incident as a bad dream.

"There was a time when officials refused to listen to us when we wanted financial help for building johad s and check-dams. Today, we are very happy that the President has come here personally to give us the award. It will give us the inspiration to carry the work forward. More than the money, it is the inspiration which is important," said an effusive 75-year-old Mangu Ram of Hamirpura.

Moments before the President arrived, the villagers of Bhaonta-Kolyala entered Hamirpura in a procession. Men, women and children arrived for the jamboree of sorts. Despite the scorching heat, they were savouring every moment.

Inside the shamianas , excitement ran high. As the representatives went up to the dais to take the citation and the cheque, others clapped merrily. Women, though veiled, talked enthusiastically about their role and their future in the harnessing water. Proud they were and eager to talk to the press. And they were doing so with ease and confidence. After all victory was theirs and they were savouring every moment.

"When I came here as a bride, I had to walk for three to four miles almost thrice daily for water. Now, things are different. We have built johad s and check-dams. Now life is not so difficult. Along with water there has been change in the economy too," said 40-year-old Gulabi of Kishori village. She is also a member of the mahila mandal (women's organisation) and is full of stories on how their informal banking system works. "When we started our work 15 years ago, we never thought we would see this day. The prize means that our aim has been fulfilled and the whole country would be learning from us," she said confidently. "In our village, we have been able to plant crops like wheat again. Though it hasn't rained for two years now, we still have water stored for drinking and domestic use," says Harbai from Bhaonta-Kolyala.

For Dhauna and Manbhari, it was a day they would cherish forever. They were the ones who accepted the citation and the cheque along with five men. Both women said the money would be used for building more anicuts and johad s in villages. Kanheya Lal, member of the Arvari Parliament and one of the five men who received the award, also reiterated the same.

For Roora Mal, whose land was submerged after the construction of a check-dam in Hamirpura, the visit was a 'real compensation'. "Villagers here have never been visited by any leaders except the village panchayat president. The visit by the President has broken all the isolation and provided us a place in the map of India," he says.

"Till the President's visit was confirmed, the state government ignored the good work and never paid attention to the problems. But once the presidential visit was confirmed, officers came to us seeking information about our activities," says Shravan Sharma, who has been associated with water harvesting activities in Alwar district since a decade. He terms the visit as 'the ultimate recognition' of the village's 15 years of effort that gave life to the Arvari river. "The President's visit will definitely put pressure on the state government to help in our works," says Veera Lal, a resident of Hamirpur. Adds Kanheya Lal, "Henceforth, Arvari will be regarded as a national monument."

Amid the crowd, in a corner sat a 94-year-old Gandhian. For Siddharaja Daddha, who has seen the struggle closely, it was a victory of sorts - that of gram swaraj . "The concept of gram swaraj is very effective and these people have proved that. It is good that the government has acknowledged the people's effort," he said, adding: "Since the President represents the people of this country, it is a big honour for these hard working people," he says.