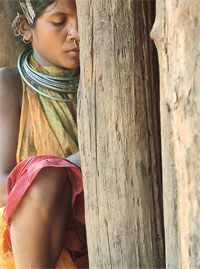 The project needs more than rich forests. It requires power generation as well as roads to transport minerals. The environmental impacts of the project are linked.

According to the project's EIA report, the mines alone will consume around 33,000 tonnes of water per year. This will be sourced from the Tel river at Kesinga through a 65-km pipeline. The river is an important source of irrigation and drinking water for people in Bolangir district downstream. Researchers with the Centre for Science and Environment's (CSE's) Green Rating Project, say the daily water consumption at the mine would meet the water requirements of 600,000 people—using a conservative figure of 55 litres per day as against the 200 litres daily consumption in Delhi. If the water consumption is taken over the mines' entire life (25 years), they will use water needed by over 15 million people.

Tel is a seasonal river, which used to be dry for almost eight months in a year. Its current summer flow is based on surplus from the Indrawati multipurpose project, because its canal system has not been completed. Once the command area irrigation works are completed, the river will have no flows in summer. Also, if mining does impact the flow of Vamsadhara and Nagavali rivers and the 36 streams flowing out of Niyamgiri range, water availability of Tel will further go down.

The refinery and the plant

The state water resources department admits that there has been no assessment of the ecological and economic impacts of the project's water needs. But water skirmishes have begun. Early this year, villagers reported that Vedanta had installed several deep bore wells along the pipeline to tap groundwater. Following these complaints Orissa's water resources department sent a team to Lanjigarh four months ago and shut most of the wells down. "We urgently need groundwater legislation that will require people to get a permit to dig borewells," says Aurobindo Behera, principal secretary, state water resources department. "But even then, we won't allow Vedanta to tap groundwater if it affects the local water supply," he asserts.

According to the project's EIA report, its stripping ratio is 1:13. This means a tonne of bauxite will have a by-product of around 13 tonnes of soil, rock and mud. Since the project will produce 3 million tonnes of bauxite, 39 million tonnes of solid waste will be dumped on the hills, annually. The EIA reports says, "The overburden and topsoil will be dumped in the identified area as per the mining plan and will be stacked separately and will be used for backfilling as and when bauxite is completely exploited from the pits."

However, CSE analysts say handling such amounts of overburden would be hard, especially since the mine site is on a hilltop. The dust and run off from the dumps will affect farmlands and pollute streams. Solid waste generated at the refineries during bauxite processing comes out as red mud and storing it is one of the biggest problems faced by alumina refineries. This highly alkaline by-product is usually stored in a tailing pond and if not contained can pollute groundwater. Vedanta's refinery will produce 1.28 million tonnes of red mud every year. All this will be stored along the Vamsadhara. Any damage or breach of red mud pond or ash pond may create disasters like the one in 2000 at National Alumina Corporation's (NALCO's) refinery in Damanjodi, Koraput, which devastated villages living in the vicinity of the plant. 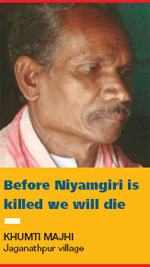 Given that Vedanta will be transporting alumina from its refinery to its smelter in Jharsuguda about 300 km away, the smelter's environmental impact too needs to be studied. To ferry 3,030 tonnes of alumina daily (assuming 330 days of operation), about 121 trucks will have to ply the road from Lanjigarh to Brindamal in Jharsuguda. This increased traffic, apart from being a nuisance to the local community, will lead to fugitive dust and vehicle emissions and noise pollution. The smelter will require an estimated 3.6 million tonnes of water annually (one tonne of aluminium production from alumina in a smelter requires about 7 tonne of water). The water footprint, however, will be much higher since the smelter project includes a 1,250-MW captive power plant.

The biggest concern about an aluminium smelter is fluoride emissions and waste (consisting of fluoride and cyanide) released from its smelting pot, called smelt pot lining. Considering the capacity of the proposed smelter, it would emit about 325 tonnes of fluoride every year. Moreover, shortterm inhalation exposure to gaseous hydrogen fluoride can cause severe respiratory damage in humans, including severe irritation and pulmonary edema. An expert team which visited NALCO's smelter plant in Angul in 2002, found cattle suffering from fluorosis. The team, which visited the site as part of the Norwegian Environment Cooperation Programme, also found a few incidences of fluorosis among local people.

These environmental impacts of mining and refineries can be mitigated and managed. But it will need vigilance and enforcement by the government. Local community representatives told DTE that given the companies past record they apprehend this won't happen.