The Sukruli cauldron threatens to boil over if the Orissa government does not act against the smoke-spewing sponge iron plant in the area. 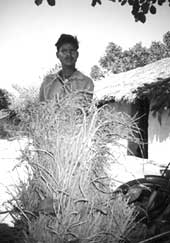 BANGLES and vermilion. The unusual gift made Orissa chief minister (CM) Naveen Patnaik see red. But by giving this present to the CM - along with samples of toxic water and ruined crop - the tribal women of Sukruli, too, were venting their anger. Because an insouciant state administration had failed to crack the whip on a polluting unit located in the area.

Since December 10, 2001, when members of the Nari Srimoyee Samaj (NSS) resorted to this unique form of protest, tribal women have held three demonstrations in Bhubaneswar and Baripada against Shiv Shakti Sponge Iron Limited (SSSIL), whose carbon monoxide, sulphur and nitrogen oxide emissions have become a nightmare for the 15,000-odd villagers residing in the Sukruli block of Mayurbhanj district.

The ill-effects of the contaminated environment have manifested themselves in the form of a host of health problems. Cases of stomach disorders, and skin and respiratory diseases are on the rise. In fact, two villagers succumbed to tuberculosis, which is widely believed to have been triggered by the noxious gases emanating from the factory.

The coal particle-laden smoke that the unit belches is thick enough to force the local panchayat high school to shut down every time the southerly wind blows. Over the past six months, there have been more than 25 such instances with children complaining of recurring headaches lately.

That the state government is blind to the villagers' plight can be gauged from the fact that not a single health camp has been conducted in the area. The primary hospital at Sukruli hasn't been of any help either, its officials having failed to nip the problem in the bud.

The unbridled pollution has begun to take its toll on the flora and fauna of the region also. While the cattle mortality rate has gone up since June 2001, the production of vegetables and crops has been seriously hit because of the dust that has settled on the fields. "There has been a decline of over 756 tonnes in the production of paddy as compared to the figures of 2000," claims NSS. The region has taken on a perennially autumnal look with most of the plants in the village left leafless and over 1,500 coconut trees having perished, it adds.

Moreover, with toxic dust of coal, iron ore and dolomites polluting the 96 wells and 85 ponds that dot the locality, water scarcity has assumed grave proportions. In fact, it threatens the very survival of the villagers. "We were much better off without the factory," laments Charima Gagrai, president of the NSS. "At least fruits and leaves were found in abundance all around. Now, because of the heavy pollution, we can't even rely on nature to provide us basic sustenance," she adds woefully.
Even though the bangles and vermilion left Patnaik shaken, they could not stir him into action. And his failure to redress the villagers' grievance stoked their stir. Consequently, NSS activists gathered outside the office of the Mayurbhanj district collector on January 31, 2002, to compel the authorities to respond. But the official simply "refused to comment on whether punitive steps were being taken against SSSIL".

"Obviously we were frustrated and out of sheer anxiety when we besieged the collector's car, 26 of our members were arrested," reveals Charima. "To add to our humiliation, we were treated like criminals by the prison authorities." On February 1, 13 NSS members were released. However, a furious Charima has threatened to intensify the agitation in the coming days. "We won't get intimidated by such tactics," she warns.

NSS members also accuse the SSSIL authorities of unleashing terror in the area to smother protests. The indomitable Charima claims to have been "threatened more than once for being vociferous on the issue". According to NSS' Janaki Naik, menfolk who try to join the movement are dissuaded from doing so courtesy the carrot and stick policy employed by SSSIL.

On their part, the NSS and the Orissa Nari Samaj have, in a memorandum of protest, stated with renewed vigour that they would now settle for nothing less than the closure of SSSIL, which started production in June 2001. The memo further accuses the SSSIL authorities of using brute force to muzzle tribal activists and the people of Baripada.


For quite some time now, residents of 20 affected villages have been trying in vain to convey their grievances to the district authorities through various media. Sarat Prusty, whose 4.04-hectare field is bearing the brunt of the noxious emissions, says: "Before the factory was set up at the proposed site, I had personally written to the managing director of SSSIL requesting him not to proceed further with the project. Even my threat of legal action did not deter him." Later, Prusty made an appeal to the CM, copies of which were sent to the State Human Rights Commission (SHRC), State Pollution Control Board (SPCB) and the revenue divisional commissioner.

When Sukruli block development officer (BDO) Bratarpi Harichandan was given the charge of finding out whether agricultural land was being used for non-agricultural purposes, she submitted an affirmative report before sub-collector Lingaraj Mullick. She, however, blamed the local people for not protesting against the industry during its inception, claiming that initially they were hopeful that the project would usher in job opportunities. Prusty reacts by pointing out that the BDO only heard one side of the story.

As if to prove their point, villagers carried out a signature campaign to request the financial institution, Industrial Promotion and Investment Corporation Limited (IPICOL), not to grant loans to the company. IPICOL, however, chose to ignore their pleas. The people of Pandersil, Bhramarpasi and Teranti villages even appealed to the SHRC to intervene, which referred the matter to the state government.

Subsequently, a team from the Balasore Pollution Control Board visited the spot and reported that SSSIL was indeed violating section 25 of the Water (PCP) Act, 1974, and Section 21 of the Air (PCP) Act, 1981. Following this, the SPCB of Orissa served a show-cause notice on SSSIL and a personal hearing was scheduled for December 21, 2001. The SPCB also directed the North Electricity Supply Company to stop power supply to the factory. But before that could happen, the SSSIL managed to get a stay order from the Orissa High Court (HC). The unit contended that its Rs 8-crore worth of assets might be stolen if the premises weren't lit up.

Even the Karanjia sub-collector's VHF message to the SSSIL to stop operations did not have any effect on its functionaries, who kept harping on the point that "if our company is operating illegally, let the authorities take action against us". Meanwhile, at the administrative level the game of passing the buck is on. When asked to comment on the issue, state industry minister K B Singhdeo at first feigned ignorance and then said, "Pollution doesn't come under my ministry. The issue will be decided by the SPCB."

As things stand, state officials choose to remain tightlipped since the matter is sub-judice. The chief minister, on the other hand, has been busy with the panchayat elections.


The mood at SSSIL is upbeat. The director of the unit, Arun Girdhar, shifts the blame entirely on some organisations and people who are trying to cash in on the hunger prevailing in the area and do not want SSSIL to operate here to bring prosperity to the region. Refuting charges that the plant isn't doing enough to check the spread of black dust, Girdhar points out that the company has developed two nurseries inside the factory campus, which have over 26,000 plants already. This is, however, contrary to the report submitted by assistant environment scientist of SPCB P K Mohapatra.

Girdhar goes on to charge the SPCB with adopting a step-motherly attitude towards SSSIL, and says its decision to "single us out from over 17 factories operating in Orissa has been influenced by the public outcry and media reports".

Pooh-poohing reports that water pollution is rampant in the area, he says, "We countered the closure notice in the HC, and the court also found that we have complied with the parameters." Technical in charge at SSSIL R Ghosh lists out the measures: "The unit has already installed three bag filters and wet scrubbers, and regular sprinkling of water is being carried out to stop dust from escaping into the air."

As a part of its offensive, the company has initiated a counter signature campaign and a few non-governmental organisations (NGOs), such as the Mayurbhanj District Environment Society, have come to the rescue of SSSIL by giving it a clean chit.

A smokescreen? Perhaps. Till the dust settles down, the answer is blowing in the wind.