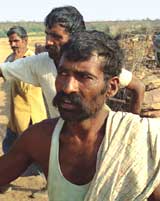 Village Hatiyaniki. Fifteen-odd people have gathered to discuss water harvesting activities in the vicinity. But there's just one face among the crowd, which is conspicuous enough to attract attention. Bereft of tact, his often-blunt interjections are received by a smirk from the other like-minded participants. But being unconventional only comes naturally to him, so he'd rather go and smoke a bidi outside before conformity enervates him. It's difficult to rein in Kalyan Gujjar -- he is his own master -- but if he sets his eyes on something, it's rare to see him not take it to fruition. And as of now, his eyes are set on taking the water harvesting system in his village Khejura in Rajasthan to heights neither conceived nor envisaged before.

In his case, appearances can be deceptive. Don't go by his torn vest and dirty dhoti or his overbearing temperament. Behind all this is a man who doesn't like to dwell on his sanctimonious past, preferring to forget it as a night-long nightmare. "I was one of the most agile members of the group (read dacoits)," he says, but his tone is far from haughty, so he prefers to quickly move on to talking about Tarun Bharat Sangh's (tbs) accomplishments in the area instead of his escapades. "tbs has been responsible in providing an opportunity to people like us to stay away from dacoity. If it would not have been for , most of us would have perhaps gone back to it," he confesses. As a short-term benefit it provides gainful employment and "in the longer run ensures that villages have sufficient water for sustained agriculture which would finally result in secure existence". Here's a man who knows what's best for him.

Like Jagdish, most of his time is spent convincing people about making water harvesting a part of their daily life. "Earlier it was difficult to get people to discuss, but now things are changing," he says of his experience. His life led on the edge has also come of use to tbs . When a worker was kidnapped by the dacoits, Kalyan ventured alone to bring him back, which needless to say he did without paying ransom. That's from someone who knows his head from the heart.