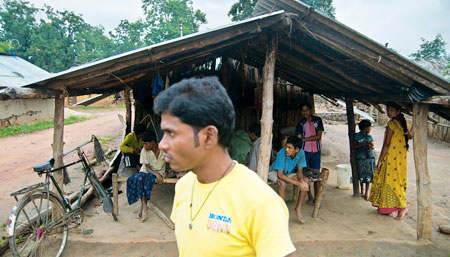 Twenty six-year-old Soyam Hunga has stayed in the Errabore Salwa Judum camp in Chhattisgarh for six years. He is from village Morguda in Dantewada district and moved to the camp, 30 kilometres away, to escape Naxalites.

For the first five years, Soyam and his wife did not need to work for food; they were provided free ration by the government. But about six months ago, the ration were withdrawn. Soyam now goes to work. Every morning he crosses the National Highway 221, heads to his village to work in the fields. He says it is the only way he can provide food to his family.

Salwa Judum movement started when Congress MLA Mahendra Karma mobilised people against Naxalites in 2005. But soon after it gained support from chief minister Raman Singh and became the face of state government’s counter-insurgency strategy. The state has since recruited a number of SPOs or Special Police Officers, from among the tribals, who are part of Salwa Judum in the state. Conflict between the Naxalites and SPOs is believed to have been responsible for several instances of rape and murders in Dantewada and Bijapur districts. This made 70,000 tribals shift to temporary camps.

“I cultivate my land in the day and leave the village by night fall,” said Soyam. He, like many others in 23 camps across the state, is caught between the devil and the deep sea. The state government had encouraged them to move to camps from villages, to protect them from Naxalites. Half a decade later, the government’s interest in their welfare seems to be waning. Soyam says that returning to his village would mean getting killed at the hands of Naxalites, like a few of his fellow camp mates who went home initially.

About 30 kilometres away at another camp Dornapal, in the same district, Revti Bai is unsure about her children’s future. The 60-year-old widow depends on NREGA, which gives her just enough to feed her two children with rations from PDS. “We are lucky, there are many who do not have ration cards and food in the market is expensive,” she said. “Access to food is difficult as ration cards have not been made for all who stay in the camps,” said Manish Kunjham, former CPI MLA from Konta in Dantewada. In Errabore, for example, out of approximately 800 families, only 525 have been issued ration cards.

With no land to cultivate or free ration, search for livelihood and safety is driving people out of the camps. “Estimates suggest that 45,000 people out of 70,000 have moved out from camps,” said Prasana R, district collector of Dantewada. Many also migrated outside the state. According to a 2008 report by Human Rights Watch, a nonprofit in New York working in conflict areas, around 65,000 people from Chhattisgarh have moved to neighbouring states of Maharastra, Orissa and Andhra Pradesh in search of work.

In August 2010, the Supreme Court of India, had asked the state government to prepare a rehabilitation plan for violence- affected people of the Bastar region. The order was in response to a 2007 petition by Nandini Sundar, professor, Delhi School of Economics, who has been tracking the camps since their inception.

“But the state has not taken any responsibility for rehabilitation that takes into account health, education, livelihood and most importantly personal safety, despite repeated directions of the court,” Sundar said. She reads verbatim from an email sent by chief secretary of Chhattisgarh to her where he claims there are no Salwa Judum camps in the state. “Since most of these people were from villages resisting Naxalite violence, the camps came to be described as Salwa Judum camps just as the relief camps established by government in the 70s for refugees from Bangladesh were called Bangladeshi camps,” Sundar quoted from the email.

On November 17, petitioners in the case asked for the formation of a committee to oversee the rehabilitation and the court agreed to the setting up of a panel but needed time to work out the details. Despite several attempts, the chief secretary could not be contacted.

Push for jobs outside the state

The only rehabilitation plan the district administrations of Bijapur and Dantewada have offered for thousands living without work in the camps is Swarn Jayanti Gram Swarozgar Yojana (SGSY).

The objective of SGSY is to enable rural families reach a sustained level of income by organising them into Self Help Groups and teaching them skills. But the district authorities are using the scheme to train people who want to get assured job in private companies outside the state.

“We have tied up with private companies like Larsen and Turbo to train people for the jobs of plumbers, electricians and security guards. About 75 per cent of those trained are assured jobs,” said Prasana. But as a special case under SGSY, the state government also pays for one way ticket for those trained to find jobs outside the state including Andhra Pradesh, Orissa and Delhi. The state hopes to send 1,000 people by the end of this year, 145 have already been sent informed Prasana. “The central government funds up to Rs 10,000 for training, the rest is borne by district,” he said.

The state government has planned development for the region by promoting mining; about 96 mining leases have been allotted or are in the process of allotment. But the people living in the camps seek infrastructure. “My daughters cannot study as the school is overcrowded.

Since we shifted to the camp, the teachers are teaching four times the students they can handle,” Revti said. Residents of Salwa Judum cam-ps in Injeram, Errabor, Dornapal and Jagargunda have written letters that are included in the petition asking for schools, health services and PDS to be restored in the villages. “People cannot return home if the PDS Shop is 30 km away; forces are staying in schools; there are no MBBS doctors in primary health care centres and most importantly without peace,” Sundar noted in her petition.

Soyam, meanwhile, sees no hope of a better life. “We cannot move to villages under constant threat of violence. There is no sign of peace returning anytime soon, ” he said.

The names of people and camps have been changed on request