DEC 07: Danish Prime Minister Lars Lokke Rasmussen officially welcomed delegates to Denmark for cop  -15, and urged them to take advantage of the “unprecedented political will” to reach an agreement.

Delegates made predictable introductory remarks, except a negotiator from Papua New Guinea, who asked that the cop be empowered to take decisions by two-thirds majority because agreement by consensus condemns the parties to weak, “lowest common denominator” outcomes. cop President Connie Hedegaard deflected the issue by agreeing to hold consultations.

A film depicting a young Danish girl’s nightmare of climate change—parched Earth, rampant tsunamis and the apparent extinction of humans—was screened for the gathered delegates. Surprisingly, some in the audience applauded the rather syrupy propaganda film. Some rolled their eyes.

Outside, more than a thousand people attended the opening ceremony of Klimaforum, a meeting place for anyone interested in climate change.

DEC 08: Bella Centre was slowly getting crowded. But the queue at the registration did not get any shorter. Outside, the streets were wet from an overnight drizzle. The right weather for the vendor under the elevated metro tracks to give free coffee to a motley group of activists. The coffee is made using wind-produced electricity. Not all activists are campaigning for emission reductions. One group wanted people to shun meat products, while another group had camped outside for justice for Aung San Suu Kyi.

Scandal! The Guardian leaked a text, prepared by the Danish presidency, on a Copenhagen deal. The Danes were quick to deny the draft. But the leak fastracked strategy formulations and informal negotiations among parties. Rumours began doing rounds that the basic countries and small island states were deciding to fight fire with fire by preparing counter-proposals.

DEC 09: There was drama both inside and outside Bella Centre. Those attending the conference were greeted by two groups of activists. A jazzy Actionaid troupe called climate change agents, dressed in red suits, held banners against rich countries. Another group called the People’s Movement against Climate Change went around in circles beating bamboo sticks and demanding a people’s agreement.

Inside Bella Centre the tiny island nation of Tuvalu became a household name. Its chief negotiator Ian Fry demanded a hearing on its proposal for a new protocol that would strengthen industrialized country targets and force leaders to prevent global warming by more than 1.5°C. Developing countries suddenly looked divided. India and China opposed Tuvalu; small island nations and the poorest African countries supported it.

A few students stripped down to their undergarments — their way of making a plea to save the future generation from a climate disaster.

DEC 10: The British newspaper Daily Telegraph reported the organizers anticipated 140 private jets to fly in and out of the city during the conference. About 1,200 limousines are already ferrying the rich and the powerful. But Chinese negotiators were seen using the metro service.

Déjà vu! In the Kyoto plenary, Tuvalu demanded a hearing on its proposal to amend the Kyoto Protocol to strengthen targets for industrialized countries and force leaders to prevent global warming by more than 1.5 °C. Tuvalu was supported by other island nations, but strongly opposed by large developing countries. Connie Hedegaard suspended the meeting to hold consultations on the way to proceed. 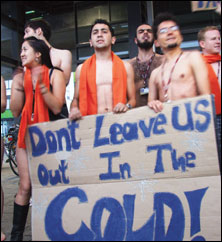 DEC 11: The day witnessed some peaceful protest at the Nytrov Square at the centre of Copenhagen. The protesters wanted to stop any corporate deal on climate.

Small island states were stoking the fire Tuvalu started a day earlier. They produced a counter-proposal to the unseen Danish draft, repeating the demand for the 1.5°C cap. Developing countries were also angry with the European Union. At the EU summit in Brussels, European countries could cobble together just $3 billion to provide quick-start funding to the least developed countries. The EU became the second runner-up for today’s Fossil of the Day award, announced by the Climate Action Network, for failing to come up with higher numbers as well as failing to raise more money at the Brussels meet. Canada was the winner as well as the first runner-up because it wanted replacement of the Kyoto Protocol.

India’s minister Jairam Ramesh reached the conference and got busy with bilaterals, while the chief negotiator, Shyam Saran, left for India to brief the prime minister on negotiations. 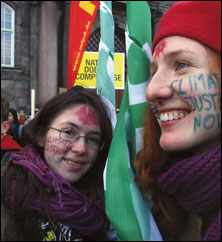 Many delegates are waiting for heads of state to arrive next week. Hedegaard invited a select group of ministers and top negotiators from about 30 countries, including India, China, the US, Ethiopia, Australia, Japan, Mexico and Saudi Arabia, for informal consultations over the weekend.

DEC 13: Bella Centre was closed but the by-invitation-only ministerial continued, along with informal discussions in hotels across Copenhagen. 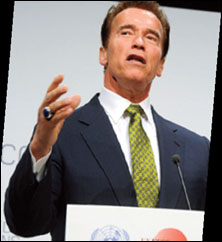 DEC 14: Oops! Bella Centre’s ID badge machines broke down. About 15,000 new delegates arrived for the second week of the conference. The UN, in consultation with the Danish hosts, was forced to do triage and prioritize registration by country delegates and press. Thousands of ngo observers were left standing outside in the freezing cold for up to 10 hours to register, then told to go home. There was no provision of food, toilets, etc.

Inside Bella Centre, African countries led G77 into a five-hour walkout from talks. They were protesting that ministers meeting on the weekend spent 80 per cent of their time talking about developing countries’ actions and long-term targets, and just 20 per cent talking about new targets for industrialized countries. The issue was sort of resolved when the cop president agreed to spend an equal amount of time on the two

DEC 15: Queues for registration outside Bella Centre grew longer. In mid-morning the UN suddenly announced it would not register any more ngo delegates. Friends of the Earth and Avaaz, two particularly vocal ngos, found their officially sanctioned badges did not work, and complained they were being intentionally excluded from Bella Centre to mute their voices.

Negotiations proceeded at a snail’s pace though today was the deadline for reaching an agreement on texts. Nonetheless, the high-level segment of the conference opened, with speeches by Prince Charles and Nobel Laureate Wangari Maathai.

After the high-level segment, negotiations resumed; industrialized countries used bureaucratic tactics to block progress on Kyoto targets; negotiations on other issues continued into the early morning, but the number of brackets signalling disagreement increased.

Arnold Schwarzenegger made a cameo appearance to add star power. 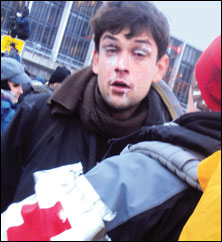 DEC 16: Fresh protests erupted outside as activists shut down a couple of Metro stations and marched up to Bella Centre. Protestors were first pepper-sprayed and then beaten mercilessly. At noon, a few observers marched out of Bella Centre in solidarity with those who were not granted passes to enter. The drama was no more restricted to the negotiating floor. During the day, official proceedings were taken up by speeches, speeches, and more speeches by world leaders.

Boom! Hedegaard resigned as the president of the cop, so Prime Minister Rasmussen could take over. Before leaving, she announced Denmark planned to table a new draft text for a possible Copenhagen outcome. Many developing country delegates, having stayed up all night to draft a deal, were livid. They asked for assurances that the Danish draft would not displace the texts they had been working on. Rasmussen decided to suspend the plenaries to consult on a way forward.

Blackmail! At night, a group of youth began a sit-in, refusing to leave Bella Centre until a fair deal is reached. The UN and the Danes threatened that no ngo delegate (instead of a fiercely negotiated quota of 300) would be allowed in on Thursday and Friday if the youth did not desist.