Destruction as a way of sustainable farming

For centuries, the Iban tribals of Malaysia have cultivated crops by clearing trees, but without endangering the rainforests. At the centre of their practices are traditional rights that each generation inherits.

Destruction as a way of sustainable farming 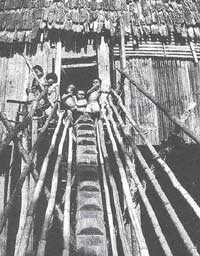 SLASH-and-burn cultivation immediately conjures images of destruction. One imagines vast areas of smouldering forest land dotted with burnt out tree stumps. But this method of farming, also known as swidden cultivation, is actually a sustainable form of forest agriculture.

The technique of slash-and-burn cultivation has been practised by generations of indigenous rainforest people throughout the tropics. These elaborate systems of land and forest use have often been blamed for the depletion of forests (See box). Clifford Sather, a researcher at the Institute of Development Studies at Sabah in Malaysia, used the example of the Iban tribals of Borneo to disprove such allegations.

The Ibans have occupied the Paku river region of Sarawak for centuries. They first settled in the Saribas district about 300 years ago and gradually expanded into the riverine region, which was covered with kampong or primary forest. Derek Freeman's classic study of Iban agricultural practices, published in 1955, described the newly settled community in the Baleh river area of Sarawak, whose agricultural economy was based on expansive plundering of virgin, primary rainforest. This method is known as the "pioneer" system of land use. Once a primary forest area's resources were expended, the tribals moved on to other primary forest territories.

However, recent studies show such primary rainforest exploitation was only a short-term phase in a longer and complex pattern of Iban land-use strategies. The tribals gradually developed a more stabilised form of shifting cultivation characterised by periodic clearing of secondary forests -- forests that came up after primary forests were cleared, cultivated upon and abandoned.

By the beginning of the 19th century, virtually all of Saribas district had passed from pioneer to settled cultivation. For about eight generations now, the tribals have been practising shifting cultivation in the secondary forests, growing rice and other food crops. More recently, however, cash crops such as rubber and pepper have been added to their list of crops.

In the course of developing this settled form of shifting cultivation, the Ibans also established a system of land- and forest-use regulation, including inheritance rights. For the Ibans, more important than the extraction of wealth from the forest were the creation and preservation of perpetual rights to land and secondary forests.
At the heart of the Iban style of forest-resource and land-use management is the longhouse, a traditional residential unit in which several tribal families, all of whom have a common ancestor, live together. The longhouse forms the basis of a permanent relationship with the tanah (the land on which the tribals depend for food and other necessities). The Ibans' concern with secondary forests reflects a variety of interests, including the material need for basic forest products such as food, dyes and medicines; building material, and religious and ritualistic requirements.

Apart from the land set aside for cultivation of crops, the forest area around the longhouse is divided into tracts, each with a specific use -- a cemetery site, fruit-tree reserve, river corridor and sacred grove. In such areas and especially around rice fields, temporary bans are imposed on tree-felling.

A household's rights to land derive from the longhouse to which it belongs. During the pioneer phase of cultivation, access to forest land was established by felling. This was converted into enduring rights of cultivation. A feller's rights were inherited by his descendants and applicable to future re-cultivation of the land. Besides land-use management, inheritance rights over cultivable areas and even trees and other useful plants were established.

Within a given menoa rumah (longhouse territory), the longhouse acts as the unit of land management through an institution known as the aum, similar to the gram sabha (village council) in India. The aum ratifies all decisions of land use. Property rights are defined and enforced, and access to community land is regulated through public discussions. When community control of land is discussed, both individual household rights that were established mainly through personal efforts and inheritance, and shared longhouse interests, particularly those that ensure the community's survival, are taken into account.

For forest management, too, the longhouse holds the reins. Individual households have rights over specific plots only for cultivation purposes. When a plot is not being farmed, it becomes part of the longhouse commons and its resources are available to all community members for hunting and gathering, whether or not they hold cultivation rights over the plot. The only exceptions are items claimed by the cultivator's ancestors or those planted by members of the household.


The longhouse also regulates felling in certain tracts within its territory. In some cases, the restriction is temporary, while in others, they are aimed at long-term reserves excluded from cultivation. For instance, at a tribal leader's death, his followers could declare a certain piece of land or stream out of bounds. Such taboo areas are sometimes described as ulit (mourning property). The ban imposed on fishing and on felling of trees in such areas stays in place until the dead leader is memorialised at a festival or until the mourning period is declared over.

A ban is usually also imposed in small strips of land for a single farming season. This is done primarily to protect crops growing on adjacent fields and also to hasten forest regeneration. Long-term bans are normally enforced in former longhouse sites, cemeteries and sacred groves.

Tenure rights over individual trees and other useful plants, both wild and cultivated, are also recognised. Valued trees include those yielding timber, textile dyes, oils and fruits. Even in former longhouse sites, rights over fruit trees continue to be recognised. Tree rights are established either by planting one or by clearing the undergrowth at a tree's base.


According to Sather, the rights of the tribals reflect the continuing community need for essential forest products. While rice, the staple diet, is cultivated, substantial amounts of vegetable and animal proteins are obtained from the forests through daily gathering, hunting and fishing. The forests also provide the tribals with other requirements such as building material, firewood, material for utensils and farming implements and herbal medicines.

Besides their economic and ritualistic importance, the plants and the forest landscape constitute a rich reservoir of symbolic images. The language used in the tribals' religious rituals are filled with plant and forest imagery and all social groupings and relationships are conceptualised in terms of botanical metaphors.

Thus, the forest landscape constitutes a visible chronology in the form of inherited trees, cemeteries and former longhouse sites. These represent reference points that help the tribals relate to events of previous generations in a unique blend of time and place.

AMIT MITRA wrote this article based on Clifford Sather's paper, "Trees and Tree Tenure in Paku Iban Society", which appeared in the Borneo Review, December 1990.