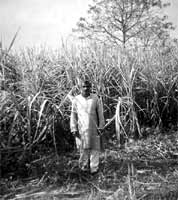 World trade in organic products for 2000 were estimated at US $17.5 billion (see table: Growing organically). Trends indicate that the organic food market would grow substantially in most of the European countries, the US and Japan. Currently, the demand outpaces supply. In the uk, demand for organic food increased by 55 per cent in 2000. Imports continue to grow and represent up to 75 per cent of organic sales.

One of the main reasons behind the increase in organic food consumption is the food scare triggered by bovine encephalopathy (BSE) in cattle, dioxin in animal feed and genetically modified products. As cheese replaced sliced sausages, German producers reported a 16 per cent increase in cheese demand in January 2001 as compared to January 2000. The cheese industry called this the 'BSE effect.'

The BSE bogey continues to haunt the entire Europe with Austria and Italy reporting their first BSE cases in January 2001, taking the total count of BSE-affected countries to twelve. Only Greece, Sweden and Finland remain untouched by the bse disease. Public opinion blamed large-scale industrial farming methods and the feeding of mammalian meat and bone meal as one of the reasons for the spread of mad cow disease and related Creutzfeldt-Jacob disease, which has caused 80 human deaths in the UK since the mid 1990s. As a result, the Europeans are ready to pay a premium price for organic products. Even though the market share of these products is small, analysts predict it will expand considerably in the years to come.

In January 2001, German chancellor Gerhard Schroder appointed Renate Kunast from the Green Party as the new minister of agriculture. Schroder has adopted the strategy to move German agriculture away from 'factory farms' and 'back to nature farms.' This move is being termed as a possible turning point for farming practices in Europe. Hans Johnson, chairperson of Swedish Farmer's Association says, "This is the first time that politicians are giving signals other than just the need to produce as cheaply as possible."

In the US, the US Department of Agriculture (USDA) has been promoting organic agriculture for several years. National organic standards in the US were released in 2000. A pilot programme offering organic crop insurance is in the pipeline. Besides, a new programme paying farmers up to $50,000 a year for practicing conservation is being promoted. The programme could cost more than US $4 billion annually. In addition, several US states have started subsidising conversion to organic farming systems. In Minnesota, in 1999, organic farmers were reimbursed up to two-thirds of the cost of organic inspection and certification.

However, the situation in India is dismal. The Indian government gives no support to the producers who grow crops organically. Worse, there is neither any legislation recognising organic farming nor accredited certification agencies. "For India to take advantage of the growing interest in organic produce in the north is a steeplechase," according to Veena Jha, project coordinator, United Nations Conference on Trade and Development, New Delhi. "Gaining access to the markets will mean overcoming the hurdles which include certifying the farm, meeting standards of the importing buyers and following the knotty import procedures," she says.


A wide variety of organic products from organic chickens to organic coffee are being sold worldwide. Organic farming is economically viable once the 'real' cost of industrialised agriculture is computed (see box: Counting costs).

In China, organic food production is growing. Sales of organic foods by the country's 800 government certified producers reached US $4 billion in 2000, of which about $140 million were exported. "Recent health scares in China over poisoned food generated an interest in domestic consumers. Specialised supermarkets in big cities now stock everything from organic soyasauce and lychees to delicacies such as organic pig face," informs Shi Songakai of the semi-official China Organic Foods Research Centre.

Though in 1997, organic coffee accounted for only between one and two per cent of the US $5 billion worldwide market for speciality coffee, the market is growing.

Grown on approximately 150,000 ha worldwide, Mexico and Peru together account for about 60 per cent of the total area under organic coffee cultivation. Certified organic coffee is usually produced by small growers and is supplied by cooperatives of these small growers and communities from remote areas which deal directly with the importers. The Indigenas de la Sierra Madre (ISMAM) made up of 1,200 small scale coffee growers in Chaipas, Mexico is an example. Cultivation is in accordance with rules set up by the International Federation of Organic Agriculture Movements (IFOAM).


Going organic is an uphill task in India (see box: All pain, little gain). The domestic market is weak as the Indian consumer is unconvinced about the benefits of organic produce. On the other hand, making inroads into importing countries is hard.

In the domestic market, lack of standards and mandatory certification makes it easy for spurious producers to cash in on the 'organic fad.' Absence of any proper mechanism to certify the organic products gives rise to a lurking doubt in the consumer's mind over the authenticity of the product beings old as organic. Though Indian standards for organic foods were introduced in March 2000, these are not mandatory: inspection and certification for the farm is necessary only for export. And while Mukesh Verma, a Mumbai-based advisor of organic farming, may claim that "people in UK just see the weevil hole in wheat and get an assurance that it is organic", for India the hole may occur due to bad storage practices. The pertinent question then is that why would the cost-sensitive Indian consumer pay more for a product of doubtful credentials?