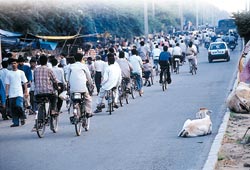 It is clear that small-scale industries (SSIs) can no longer afford to remain dirty and defiant. The same is true for the government. Not only is it a question of the livelihood of 20 million people but also about cleaning up India's environment, which again affects people. What is required is a shift in paradigm from pollution control and treatment to pollution prevention. "End of the pipe pollution control strategies have proved inadequate and piecemeal measures for SSIs," observes P K Gupta, director, National Cleaner Production Centre, New Delhi.

Some sporadic initiatives offer hope. Take the case of the agro-based pulp and paper industry. The effluents generated in the pulping process, known as black liquor, are very polluting in nature. Today, the technology to treat this black liquor is available. Through anaerobic biodigester black liquor can be treated and its high organic content used to generate biogas. This can further be used as an alternate clean energy source by the industry. This process generates comparatively less effluents, which can be treated and discharged. Only a few large and medium-scale plants are using this technology and more research is needed to make this a technological option for the SSI sector.

Next comes the issue of developing resource efficient and less polluting technologies. This becomes important because almost all such technologies that are available today have been developed in the western countries and cater only to the larger industry. "Interaction between the research and development organisations and the industry is not very good in our country. We have to work in such a way that scientists are encouraged," says K P Nyati, head, environment resource division, Confederation of Indian Industry (CII). "If a scientist comes up with an innovative and cost-effective pollution control technology, the industry will only be too willing to accept it. In such a case, 50 per cent of the money made could go to the scientist and 50 per cent to the institution represented. This would also keep the motivation level of the scientists and researchers high and would also mean that better and cheaper technologies are available to the industry as well, says Nyati.

Those who have applied their minds have been successful in coming out with feasible solutions (see box: A clean success). The Central Leather Research Institute in Chennai - a Union government institution - mandated to do research for the leather sector, has come up with one such project. Bio-methanation plants have already been set up and running at a few tanneries around the country. These plants are attached to a tannery with an abattoir close by. All the wastes from the abattoir are used to produce energy in these plants and fresh non-salted hides go straight to the tannery.

The private sector too can chip in by conducting research for SSIs. "But interest in R&D to find environmental solutions for SSI would arise only if units are forced to comply with pollution control norms and adopt new technologies. With such lax enforcement, few want to waste time developing technologies which ultimately would find few buyers," says Mahesh Vyas, executive director, Centre for Monitoring Indian Economy Pvt Ltd, Mumbai. "Nobody will conduct research to make them more efficient at this level of compliance because basic economics will work against anyone conducting R&D for SSIs," adds Vyas. This means that a number of agencies will have to come together to create an atmosphere conducive for undertaking R&D activities for the SSI sector.

One such effort for the leather sector has already been launched by CLRI in collaboration with various government research organisations. "This project, under the Tenth Five Year Plan, aims to manufacture a complete eco-friendly product by eliminating all the chemical inputs in leather production and replacing them with biological materials," informs T Ramasami, director, CLRI.

These technological innovations make it clear that cleaning up the small-scale sector is not impossible, though difficult. And for that, the government needs to undertake large-scale overhauling of our small-scale sector. Both in its content and context.