Losing jobs in the jungle

Irula tribals are rich in the knowledge of traditional medicine. They used to catch snakes and practise herbal medicine for a living. Today they have had to abandon their traditional occupation as wildlife laws do not permit it

Losing jobs in the jungle 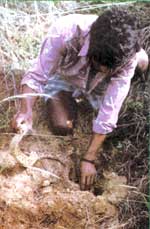 NAGAMMA, 55, is a vaidyar (traditional doctor), who is an expert in curing snakebites. She lives in Keerapakkam village, Chengalpet district, Tamil Nadu. One morning, Chinappa, a snake catcher, was bitten by a large cobra. He was taken to several doctors, but no one could cure him. He was gasping for breath and was about to die. In the evening he was taken to Nagamma. With some herbs, Nagamma prepared a medicine and gave it to him. By late evening he was ready to go home.

Nagamma belongs to the Irula tribe who are skilled at catching snakes for extracting anti-venom. They have vast knowledge about herbal medicines. However, the snakes have become scarce due to depleting forest cover. So, the Irulas are now forced to work as agricultural labourers. Though some of them still catch snakes, they do not get enough income for their livelihood. As they have abandoned their snake-catching activity, their knowledge and skills in the field of traditional medicine may be lost forever.

Most of the Irula men and women are unaware of the wealth of their knowledge. Only a few organisations realise the importance of the knowledge of the Irulas and want to help them both socially and economically. The Irula Tribal Women's Welfare Society (ITWWS) is one such organisation working for the welfare of the Irulas, particularly among the women. Its work for creating forest cover under the wasteland development programme has earned it a national award. The knowledge of herbal medicines has been documented by the ITWWS. Attempts have also been made to generate income for them through the preparation and sale of medicinal products. A centre with training facilities and a medicinal garden has been established.
The ITWWS is a member of the Tamil Nadu Women's Movement and the Joint Council of Tribals Association (ICTA). It has been working with them with the object of empowering tribal women, helping develop a common vision, identifying policy issues, and preventing violence against women. The ITWWS has been collaborating with other local NGOs to implement the latest Tribals Act and push for the inclusion of tribals in the Fifth Schedule. The ITWWS has also given training to some NGOs involved in tribal development. After the training programme at the ITWWS, several of the NGOs changed their approach. For example, some NGOs who earlier used to discourage traditional tribal activities and attitudes, are now trying to preserve the tribal culture and identity.

The ITWWS has initiated several income-generation programmes. A tree nursery project has seen 5,000 seedlings including medicinal species being planted. This project has also given employment for women. The herbal medicine programme uses the skills and knowledge of Irula vaidyars for preparing and marketing herbal medicines. It includes collection of plants and seeds,cultivation, exchanging information between vaidyars and researching market possibilities.
Etymologically, the word Irula is supposed to be derived from the Tamil word, Irul, meaning darkness which may be a reference to either the dark jungle in where they live or to their dark complexion. P Thamizoll in a study on the Irulas says: "It was believed earlier that the Irula occasionally indulged in cattle theft and robbery". The stigma that the Irulas are thieves and robbers still persists. In December 1997, an Irula woman in Maduranthagam in Chengalpet district was reported to have been killed by the police and local politicians because she allegedly committed a petty theft. The ITWWS, along with other organisations, demanded that the District Magistrate hold an enquiry. After strong lobbying by NGOs, including ITWWS, he ordered an enquiry. The report of this inquiry is awaited.

Many Irula women are fighting against exploitation. Valliyammal who lives in Pudupakkam is a spokesperson of the ITWWS. She is one of the few Irulas who stood up to the local landlords of Pudupakkam for whom the Irulas work during the rice planting and harvesting seasons. Paramasivan is a landlord who regards the Irulas as bonded labourers who should work for him whenever needed. One day he got angry because they had gone to the forest to collect food instead of working in his field. That evening he came with a knife and threatened them. "It was not right to just stand there and listen to this lunatic," protested Valliyammal. In the ensuing brawl, Paramasivan was handed over to the panchayat president. Paramasivan accused the Irulas of stealing his money. But the Panchayat found the tribals not guilty. Paramasivan was fined Rs 2,000 and had to give a written assurance that he would never harass the Irulas again.

There is a misconception that only Irula men catch snakes. Parvati, a woman of teh tribe, has caught over a hundred venomous snakes over the last 10 months, including many vipers, kraits and cobras. She is a licensed member of the Irula Snake Catchers Cooperative, which sells snake venom to laboratories for anti-venom serum. She learnt snakes-catching from her father. Today she and her husband both catch snakes. The cooperative pays them Rs 110 for a Russel's viper, Rs 100 for a krait and Rs 50 for a cobra.

An unimaginative conservation law and a government that refuses to address the need for regulated trade in wildlife is forcing the Irulas to the brink of penury. Shrinking forest cover makes it difficult to find snakes even for venom collection. The wildlife conservation policy bans farming snakes for commercial purpose. It leaves the Irulas with little choice but to shelve their traditional skills.

Meanwhile, Nagamma narrates another incident. Raman, another snake catcher, in an effort to catch a snake from a rat hole was bitten thrice on his thumb. Nagamma asked his family to remove the tourniquet from his hand. She boiled a medicinal root in a copper pot, and poured the medicine in his mouth with an iron rod. "As the medicine went inside, the poison came out," she said. However, Raman did not lose sight of the big cobra and caught it even after being bitten. It brought him over a hundred rupees at the venom centre the next day.