River banks are efficient water filters. Haridwar shows how to make most of them 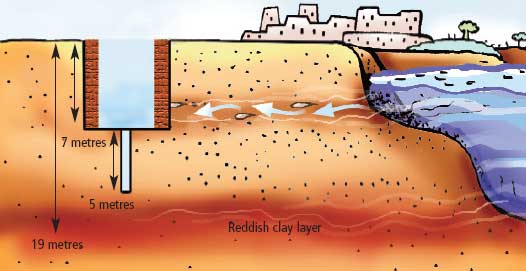 The holy town of Haridwar on the banks of the Ganga has of late been receiving pilgrims of a different kind. They are students and professors from India and abroad who come to study its water supply system. Over a third (38 per cent) of the water supplied in Haridwar is naturally treated as it passes through the river banks.

Wells are sunk a little away from the banks where the river water percolating sideways collects. Sand or earth acts as a filter and the time for which water is retained in ita month in case of Haridwarrenders 99.99 per cent of the bacteria inactive, says the supplier Uttarakhand Jal Sansthan (ujs). The system is so efficient that water needs minimal treatment; only a small dose of sodium hypochlorite is added to deal with possible contamination during supply to houses. ujs is saving Rs 75 lakh on treatmentincluding the operation costevery year, estimates its executive engineer Subodh Gupta.

The purification technique called bank filtration is not new. Several countries are using it on a large scale. In Slovakia, for example, half the water drawn from groundwater is bank filtered. But in India most water suppliers are yet to identify wells that contain water percolated from a nearby river or lake. This information can help them increase the capacity of such wells and set up an alarm system to check their contamination, as Haridwar has done.

In 2004, ujs, in collaboration with iit Roorkee and a German team, sunk monitoring wells near one of its infiltration wells named IW-18. The monitoring wells intercept water two weeks before it reaches IW-18. Checking water quality in them can alert ujs about contamination in advance, said Indu Mehrohtra, professor at iit Roorkee.

Geological surveys by the European Union River Bank Filtration Network revealed that the aquifer beneath IW-18 would yield water between 6m and 19m below the ground. IW-18 was 7m deep, so it was tapping only 1m of the aquifer. Small wonder it would run dry after four hours of pumping water. ujs would pump water for four hours twice a day.

The water utility decided to drill IW-18 to 19 m to tap the entire depth of the aquifer. But ujs engineers encountered hard rock at 12m. Having accessed a further 5m of the aquifer, we can now draw water for more than the stipulated eight hours, said Gupta.

The engineers also changed the width of the well. All ujs wells are 30m wide but in IW-18 they inserted a 300 mm-wide pipe while deepening it. ujs then calculated that sinking six 300mm-wide wells 17m deep would cost Rs 90 lakh and yield 7,200 kilolitres of water a day. This is five times what a 10m-wide and 7m-deep well yields at a cost of Rs 100 lakh. But b y the time ujs found ways of increasing the yield of its infiltration wells, the Uttar Pradesh Jal Nigam, in charge of water infrastructure, had begun work on six such wells, 6-7m deep, to meet Haridwars demand till 2025.

Other towns by rivers can still learn from the ujs experiment since the bank filtration technique has many benefits. It is easy to operate, requires little maintenance, keeps water free of chemicals used to kill germs and does not require obstructing river flow by building barrages. But it is not applicable to every river and every seasonin lean season water may percolate towards the river. It is most suited to rivers having deep alluvium aquifers, said Anupam Singh, professor at Nirma University in Ahmedabad, which is involved in implementing the technique in Gujarat. These aquifers, formed by deposition of sand and silt, have a hydraulic conductivity suitable for cleaning water.

Engineers also have to be careful in selecting the site of wells because in India many rivers change course, said Chittaranjan Ray, faculty at the University of Hawaii who has written two books on bank filtration.