Petroleum fuels the engines of the global economy. So there is never enough of it. Oil politics dictates international relations 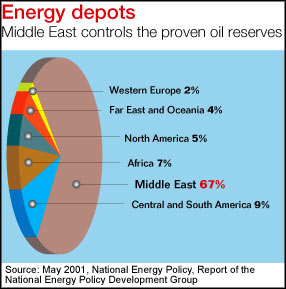 The post-war boom had brought gas-guzzling vehicles, expanding highways and mushrooming suburbs in the industrialised countries, especially the US. This boom was fuelled by oil - the industrialised economies depended almost entirely on intensive use of fossil fuels. The world learned about its dependence on oil in 1973. The Yom Kippur War broke out in October 1973 between Arab countries and Israel. The Arab nations embargoed oil export to Western nations that supported Israel and cut down production. OPEC, formed in 1960, was a big enough supplier to control prices by this time.

The result was chaos in all the industrialised countries. The cost of a barrel of crude oil rose from US $3 in 1972 to US $12 by 1974. This 'oil shock' forced the West to chalk out an aggressive plan to free itself of the clutches of OPEC. Securing supplies of oil, increasing domestic production and importing from varied sources were the essential elements of this strategy. A new term gained currency: energy security. About 30 years down the line, the industrialised countries are yet to break out of the clutches of OPEC - their economies have kept growing on the strength of imported oil (see table: The top players).

Take the example of the US, the world's largest consumer of energy and the biggest importer of oil. When the US began trying to diversify its oil sourcing and increase domestic production in 1973, it imported about 35 per cent of the petroleum it consumed. Today, it imports more than 50 per cent. As energy demand surged by 17 per cent during the 1990s, domestic oil production rose 2 per cent only.

And oil accounts for 40 per cent of the total energy use in the US at present.

Canada, Mexico and Venezuela each supply the US about as much petroleum as Saudi Arabia, the world's biggest oil producer. Yet Saudi Arabia remains its biggest supplier of crude oil. In 1977, OPEC (Organisation of Petroleum Exporting Countries) accounted for one third of the total US oil consumption. In the mid-1980s, the figure fell to below 13 per cent. And then it started climbing again. At present, OPEC accounts for half the US oil imports - roughly one-fourth of total consumption - and about half of that comes from the Persian Gulf (see graph: Energy depots). The US doesn't see itself breaking free of dependence on oil imports anytime soon. In fact, some experts say that the percentage of US oil imports (as well as those of other oil importing countries) from the OPEC cartel, and specifically from the Persian Gulf, is only going to increase (see graph: Oil stuck).


The terrorist attacks on the US on September 11, 2001, have revealed the cost the country has to pay for its oil dependence on the Gulf. Its oil ties with Saudi Arabia became a bit of an embarrassment when it was found that 15 of the 19 hijackers in the attacks were Saudi citizens. About 600 families who had their relatives killed in the September 11 attack have filed a US $100 trillion lawsuit against, among others, Saudi officials for helping the terrorist network behind the attack. The US government's continued support for the autocratic Saud family of Saudi Arabia causes considerable discomfiture to a country that plays the global cop and claims to defend democracy across the world.

Proposing the largest energy budget in US history, Spencer Abraham, US energy secretary, told a committee of the House of Representatives on March 6, 2002: "Over the last 12 months we have seen energy supply shortages; natural gas and gasoline price spikes in the Midwest and California; and terrorist attacks within our borders... [The budget request] of $21.9 billion addresses the new security challenges we face as a nation after the events of September 11, as well as increased concern regarding our dependence on foreign oil, and the security of our critical energy infrastructure."

This dependence is not unique to the US. Take the example of Japan, the second largest consumer of oil in the world - it consumed more oil in 2001 than Russia and Germany put together. Oil meets 52 per cent of Japan's total energy needs and the country has virtually no oil reserves of its own. About 75-80 per cent of this oil comes from OPEC, particularly from countries in the Persian Gulf - United Arab Emirates, Saudi Arabia, Kuwait, Qatar and Iran. "Japan has worked - with relatively little success - to diversify its oil import sources away from the Middle East," notes the US department of energy. Japan has used its commitments to cut down carbon emissions under the 1997 Kyoto Protocol to rapidly increase its nuclear power production - nuclear provides about two-thirds of its electricity. The nuclear industry is witnessing something of a revival across the world (see box: Nuclear change for climate).

Another method the Japanese have tried is to build inroads for its oil companies overseas. In 1967, the government established the state-run Japan National Oil Company (JNOC) to promote overseas oil exploration to secure oil supplies. It amassed several bad loans in trying to invest extensively and guarantee loans of Japanese exploration firms. But in February 2000, the company lost drilling rights in Saudi Arabia, losing a supply of 280,000 billion barrels per day. This was after Japan refused to invest in development projects in the kingdom. Another concession to a Japanese exploration company expires in January 2003, and its renewal has been dogged by controversy. Japan's Arabian Oil Company has been trying to make up for the loss in Saudi Arabia by courting Iran. But Iran is a political anathema to the US, Japan's close ally. In its effort to diversify, Japan has created an exploration stake in the Caspian Sea region, just as the US interest in the Caspian has increased greatly in recent times.

Coming back to the US, it has developed a recent interest in several regions - from Russia to the Caspian region to a love affair with Central African nations. Africa supplies 15 per cent of the total US oil imports. This is bound to increase as a result of rapid growth of production from new fields and the construction of a pipeline from the landlocked Chad to ports in the Atlantic Ocean. There are two clear advantages in courting Africa. First, most African reserves are close to the coastline or offshore, making exports to the US easier. Second, several African oil producing countries aren't members of OPEC. Gabon walked out of OPEC in 1995. Nigeria is a member, but has been unhappy about the production quotas. There are reports that it has been producing over and above its quota through recently developed oilfields. "It is a measure of President Bush's interest in the geopolitics of oil that he found time at the United Nations last month to meet several leaders from west Africa," the Financial Times of London observes.

Attending the oil interests are stories of how systems are manipulated to benefit industrialised countries and their rich oil companies. Some US non-governmental organisations have alleged that federal government officials are compromising on environmental reviews of international infrastructure development funded by US-backed public development banks. One example is the US $3.7 billion oil pipeline to be built by a consortium of oil companies led by Exxon-Mobil from Chad to ports in Cameroon. Officials of the US Agency for International Development said that both the countries had failed to perform an adequate assessment of the environmental impact of the pipeline. Yet the US representative at the World Bank backed a loan of US $ 140 million for the pipeline.

A recent study by the Institute for Policy Studies in Washington, DC, shows that many energy corporations facing US government investigations - for accounting irregularities, energy market manipulation, fraud, bribery, human rights abuses or other malpractices - have coaxed out billions of dollars as finance from the World Bank over the past decade. These include Halliburton, the second largest beneficiary of World Bank energy financing. Dick Cheney, US vice president, was the CEO of the company before his election. Other names include the bankrupt energy giant Enron and Harken, which had George W Bush on its board before he became governor of Texas. Big oil and morality do not go together.