Fed up of state’s highway fixation, villagers connect themselves to the world 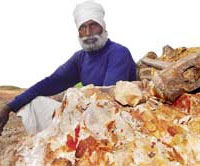 Shaking hands with Ramchandra Das is like clasping a stone. His hands are callused by 11 years of cutting a hill to build a road all by himself. Das’s only companions were a hammer and a spade.

The four-metre kuccha road he completed in 2005 is the only connection between his village Keuti in Gaya district of Bihar with the world beyond the hills. “I wanted this for my impoverished village for long,” said Das, who was a truck driver before he set out to carve a road in the hill. As he puts it, he was inspired by a madman in the neighbouring Atri village.

Dasrath Manjhi kept chipping away at the hill surrounding Atri for 22 years and cleaved a 100-metre road across the hill in 1982.


The road, now named Dasrath Ghati, connects the block with the district headquarters. “I pleaded with Manjhi to cut the hill that isolated my village. He chastised me and told me to be a man and cut the mountain. I followed his order,” said Das, a self-proclaimed disciple of Manjhi.

In 2004 the Bihar government recognized Manjhi’s work and conferred on him the title of Parbat Purush (Mountain Man). At a function in 2008, chief minister Nitish Kumar got up to offer his chair to Manjhi and pledged to fulfil his request for a pucca road through the hill. Manjhi died in January 2009. The government has since built everything in his memory, from a hospital to a community hall, but the pucca road.

Unlike Manhji, the road that Das built has not brought him recognition. A few months ago, village headman Baleswar Yadav asked him to level the road because his son had bought a Tata Safari. “My road was fit for tractors and bullock carts. Headman’s words offended me. I picked up the hammer again and levelled the road,” Das said. Asked why he does not approach the government to improve the road, he said, “The government did not fulfil my guru’s wish; my request won’t yield any result.”

Roads built by Manjhi and Das, however, do not show on the state’s road network map. Officials at the road construction department said there are about 70 such roads and bridges across the state built by individuals or communities. It is difficult to keep a record of it all. Perhaps, people are getting fed up with the government’s road plans that focus on highways, a senior official in the department said.

Nawal Kumar, a brick kiln owner in Gaya’s Siripur village, explained. The government has been constructing a bridge for the past 10 years across river Falgu, which separates 16 villages from Gaya town. “The two-km bridge is yet to be completed,” he said. In the past few years, residents of these villages have been building kuccha roads across the river after it dries up in summer; the farmers donate loose earth to pave the riverbed. “We have to soon stop this because our land level is sinking,” Jitendra Manjhi, a farmer in Siripur, said. “Fifteen such roads are laid across the Falgu every year,” Kumar said. And once they are ready officials and mlas use them, he said.

Not all are ready to put up with this attitude of the government. Last year, residents of Dharharwa village in Samastipur district built a bamboo bridge on Mansurama river after the government failed to repair a bridge washed away 10 years ago; it connected the village to a national highway. They decided not to allow any government official to use the bridge and boycotted the Assembly election. The government has now announced it will repair the bridge.