Jai Sri is a common greeting in the Koraput countryside these days. A Paraja tribal woman working in her fields, a passing motorcyclist driving through the rutted lanes, a teacher heading for his school, they all greet each other and visitors with a Jai Sri. It has nothing to do with religious revivalism, but is the new buzzword sweeping the farmlands of Odisha—and large patches of India. SRI is the acronym for System of Rice Intensification, a new technique to grow rice more efficiently using much less water and seeds but yielding far greater quantities of rice.

It is a system that is being spread by a band of somewhat unlikely evangelists: academics, non-governmental organisations (NGOs), top-flight charitable trusts, crop research institutions, wildlife organisations, the World Bank and most surprisingly the Government of India.

Muralidhar Adhikari, who works with Koraput NGO Pragati, exemplifies the spirit of the SRI missionaries. He goes from farm to farm with a message that comes across as heretical to rice cultivators. Stop growing rice in standing water, use as little of the precious resource as possible, reduce seed consumption and throw out pesticides and chemical fertilisers. “Initially farmers are sceptical and it takes a lot of convincing to get them to try SRI,” says Adhikari, district coordinator of Pragati which is channelling most of its energies into transforming rice cultivation in this backward tribal district of Odisha.

In SRI 8-14-day seedlings instead of the normal three-four-week-old seedlings are transplanted at wider spacing through a marker system for uniformity. Only one seedling is planted per hill. Water is used sparingly to keep the soil moist (alternate wetting and drying) but not continuously flooded. Weeding is carried out mechanically through a rotary weeder (small hand-driven machine), but instead of throwing out the weeds these are pushed into the soil for aeration and providing organic compost. Use of farmyard manure is encouraged because SRI cultivation responds better to organic fertiliser than chemical fertilisers. Seedlings are raised in unflooded nurseries, not planted densely and have to be well supplied with organic matter. There is an option of direct-seeding, but transplanting is common. Seedlings have to be transplanted quickly and carefully in a square pattern, usually of 25x25 cm, to give roots and leaves more space to grow.

It is these simple but time-consuming and intermittently labour-intensive practices that could prove the saviour of rice farmers, increasing yield between 30-80 per cent and cutting down water consumption by as much 40 per cent. Seed use, too, is drastically pared.

Ask Duddeda Sugunavva, a 38-yearold Dalit farmer from Katkur village in Warangal district of Andhra Pradesh. The delighted farmer, who works on two acres (0.8 ha) of leased land, says, “I was reluctant at first to try a method that was completely contrary to what I’ve been used to for decades.” But grudgingly she tried out SRI on about one-tenth of an acre. But after harvesting six 70-kg bags rather than the usual four bags from that plot, she quickly extended the technique to the entire two acres, and has now been using only SRI practices for five seasons.

Her take-out is pretty stunning. Compared to the 35-40 bags of rice from one acre (2.8 tonnes/acre) that she would harvest earlier, Sugunavva now gets 55-60 bags (4.2 tonnes/acre). She has more reason to smile: costs have been slashed by Rs 4,000 per acre. SRI in Andhra Pradesh is spearheaded by the World Wide Fund for Nature in collaboration with the International Crop Research Institute for the Semi-Arid Tropics (ICRISAT)—an unusual partnership aimed at promoting more efficient use of water in agriculture.

The World Bank, too, is a champion of SRI. Working with Tamil Nadu to improve its irrigation service delivery, the Bank has helped to bring around 450,000 ha under the SRI system. Its logic: “any significant growth in agriculture depends on increasing the efficiency and productive use of water.” It warns that by 2020, India’s demand for water will outstrip all sources of supply.

Since India needs to increase rice production by 2.5 million tonnes a year, it cannot hope to do so by the conventional method of cultivation. That guzzles 4,000 to 5,000 litres of water per kg of rice. Nor can it expand its irrigated area to the required level because of constraints on land and water resources.

One reason Tamil Nadu is promoting SRI is because it is one of India’s driest states, getting just 925 millimetres of rainfall a year. The per capita availability of water resources is 900 cubic metres a year compared with an average of 2,200 cubic metres for the country. And agriculture consumes 75 per cent of the state’s water.

Perhaps as a result of Tamil Nadu’s project, SRI has caught the imagination of the mandarins in Delhi, too, which has set aside Rs 8 crore under the National Food Security Mission to propagate SRI in the selected districts where the programme runs. The mission has a target of covering five million ha by 2011-12 and is a key element in efforts to push up rice productivity.

NGOs are the foot soldiers of this innovative programme with nodal organisations stringing together district- wide networks to reach as many small and marginal farmers as possible. The NGO network from Pradhan in Bihar to CROPS in Jangoan, Andhra Pradesh, has been made possible thorough generous funding from private charities. The largest donor is the Sir Dorabji Tata Trust, which has selected SRI as one of two major initiatives under its natural resource management and rural livelihoods programme. Biswanath Sinha, senior programme officer with the Trust, says it started with an initial allocation of Rs 11 crore in 2007-08 and has upped the figure to Rs 24 crore for 2010-11.

Matching funds have come from the public sector. NABARD, for one, has taken up SRI in earnest and allocated Rs 16 crore for the programme. It is also putting together data to prove SRI’s efficacy. According to a survey compiled by its Raipur office, yield increases are as high as 50 per cent. 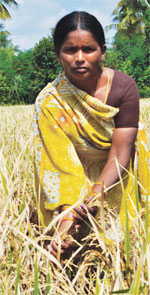 Scientists, however, are yet to be convinced.

U S Singh of the International Rice Research Institute’s (IRRI’s) STRASA programme in Delhi insists that there is no scientific data to corroborate the claims made by SRI proponents. IRRI incidentally promotes the direct-seeded technique of rice planting which also avoids the conventional puddling and submergence practices.

Shambu Prasad, associate professor at the Xavier Institute of Management, Bhubaneswar, who has put together a national alliance on SRI, believes that scientists tend to be dismissive of SRI because the technology has come from the farmers and not the formal research establishment. He admits that there are issues with SRI. One is labour costs. Although small farmers can come together to do the tansplanting and weeding at the critical times, costs can be a concern when farmers have to hire labour for these chores. One yardstick of the technique’s success is that SRI is being adapted for a range of other crops from wheat to millets.