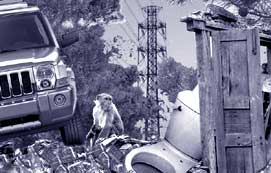 A BILL
To recognise and vest rights to forest lands, and lands/waters and resources of other ecosystems, in urban dwellers, in recognition of their essential needs to maintain and enhance their lifestyles.


Chapter 1:
Definitions
For the purposes of this Act, the following definitions will apply:

Chapter 2:
Rights of urban dwellers
1 The right to land...for diversion to other uses, including submergence for power generation, urban expansion, transmission lines and pipelines, and any other project or process;

2 The right to wood from all kinds of forests, for house-building, furniture, panelling, production of pulp and paper, and all other products urban dwellers need as essential for lifestyles;

3 The right to all other (non-wood) biological resources in natural ecosystems, for...herbal medicines and cosmetics, 'ethnic' foods, propagation material, decoration, commerce, and all other such uses that urban dwellers need as essential parts of their lifestyles;

4 The right to all mineral resources within or under natural ecosystems;

5 The right to unlimited electrical power;

6 The right to enjoy, for aesthetic pleasure and psychological well-being, all natural ecosystems and wildlife... including the right to drive suv s through such ecosystems;

7 The right to extract any amount of water from natural ecosystems, for drinking (including in bottled and aerated drinks), washing, flushing toilets, running fountains, playing water games;

The special position of two sets of people would be given due attention:

1 Urban environmentalists, in recognition of their unselfish struggle for the cause of conservation of the resources on which the lifestyles of urban dwellers are so critically dependent;

2 ceos of major corporations (Indian and foreign), in recognition of their equally unselfish endeavour to make available all the above resources and goods to urban dwellers.

Chapter 3:
Duties of the government
It shall be the duty of the Central and state governments to ensure that the above mentioned rights are enjoyed free of any encumbrances. This would include the duty...to divest other users including traditional users of any rights to access these lands and resources.

Chapter 4:
Authorities for vesting rights
A Urban Dwellers (Rights to Natural Resources) Authority will be set up by the Government of India, to develop the rules and procedures to confer the rights.


Chapter 5:
Penalties
Anyone found obstructing the above rights, i.e. denying such rights to urban dwellers without good reason, will be guilty of an offence under this Act (for the purposes of this Act, "good reason" would not include the livelihood needs of the original dwellers of forests and other natural ecosystems).

Corrigendum
In the fierce ongoing debate on the Tribal Forest Rights Bill 2005, many conservationists have raised an alarm about how the Bill might destroy what remains of India's forests and wildlife. It is supremely ironical that as urban conservationists, we are already guilty of enormous ecological destruction in our daily lives. It is shamelessly hypocritical to point to deforestation and poaching by villagers, while not even acknowledging the huge ecological cost of rich urban lifestyles that demand minerals, water, power, food, wood and other produce from natural ecosystems. These don't come from thin air, they come from mining, industrial, irrigation, and power projects that every year destroy thousands of hectares of natural ecosystems.

Hence the above document.