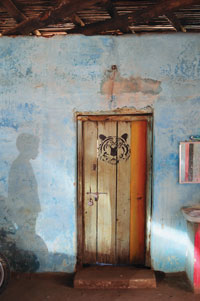 Business in Khatia village on the border of Kanha National Park in Madhya Pradesh starts as early as 2.30 am. Tour operators crowd the yet-to-open ticket counter at the entry gate. Gypsies carrying drowsy tourists start queuing up, jostling to be ahead of each other. Restaurants and shops open to serve the tourists. As soon as dawn breaks, Khatia resembles a crowded marketplace. All this is to ensure that tourists do not return disappointed. They must see a tiger.

It is important to enter the reserve early. If a “tiger show” happens only a limited number of tourists are allowed. On days a tiger is sighted, the forest department employs mahouts to take tourists of the first 20-30 vehicles on their elephants and track the big cat.

Kanha, which has one of the highest density of tigers, was among the first nine national parks in the country to be declared a tiger reserve in 1973 under the Project Tiger. As tiger became the biggest tourist attraction of modern times, Kanha, like other tiger reserves, saw an unprecedented growth in tourism. The number of visitors increased from 106,000 in 2006-07 to 175,000 in 2010-11—a growth of over 60 per cent (see ‘Booming tiger tourism’). During the period, the number of hotels increased from 30 to 62. 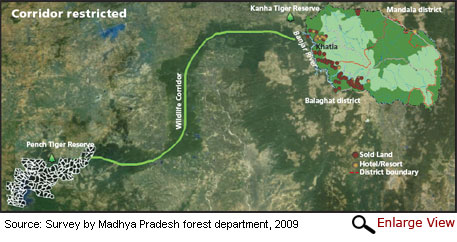 State governments are promoting tourism in protected areas as eco-tourism because it earns them revenue. Madhya Pradesh, for instance, has declared four of its tiger reserves as eco-tourism destinations. But without any regulations, the booming tourism poses a serious threat to the dwindling number of big cats as well as their ecology.

Most of the hotels in Kanha are located within half a kilometre of the reserve boundary, along the Banjar River. This restricts wildlife access to the river and has fragmented the critical wildlife corridor between Kanha and the Pench Tiger Reserve, 180 km away (see map). “It used to be a live corridor. Wild animals would travel from one end of the corridor to the other and come back. We have seen radio-collared tigers doing this. But we don’t see much wildlife in the corridor now,” says J S Chauhan, field director of Kanha Tiger Reserve. 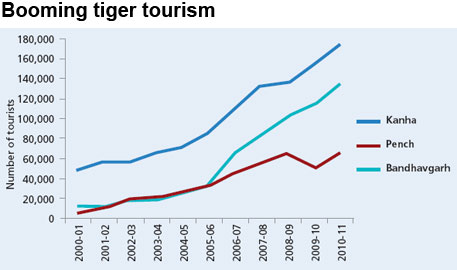 Senior forest officials like Chauhan admit that what is happening in tiger reserves now is not eco-tourism, but economic tourism.

For instance, Kanha allows 280 vehicles a day. The National Tiger Conservation Authority estimates that Kanha can sustain 40-55 tourist vehicles per day. “Tourism in tiger reserve is demand -driven. Tourists want air-conditioners and swimming pools,” says a naturalist requesting not to be named. He works with a resort owned by a renowned hotel chain. “None of the hotels uses renewable energy sources. My resort uses hundreds of litres of kerosene in generators to produce electricity.”

In 2009, 48 resorts in Kanha extracted 540,000 litres of groundwater per day, notes a yet-to-be published study by a forest official in Madhya Pradesh. That year the hotels consumed 302 tonnes of firewood, 42 per cent of which came from forests in the buffer zone. Around 40 per cent of hotels in Kanha used wood-based boilers that year. 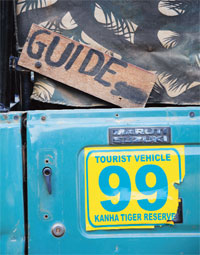 The situation is equally precarious in other tiger reserves. Krithi Karanth of the Centre for Wildlife Studies, Bengaluru, and Ruth Defries of Columbia University in the US surveyed 10 protected areas across the country. There were swimming pools and water fountains in the hotels and resorts in arid regions like Kanha, Ranthambore and Pench. Tourist facilities are often located near villages where people have limited drinking water facilities and grow rain-fed crops, the study notes. In Kanha, Down To Earth found water shortage in summers requires the forest department to supplement water bodies inside the protected areas.

While the resorts make good profits consuming the local resources, they hardly share the profit with the communities, as recommended.

The Indian National Wildlife Action Plan states that benefits from eco-tourism must be shared with the communities. So did the Tiger Task Force Report in 2005, which recommended that hotels and resorts on the periphery must contribute 30 per cent of their turnover to the communities and the reserve management.

The forest official’s study found that the combined profit of the 48 hotels around Kanha in 2009 was Rs 22.45 crore. But the hotels paid only Rs 65,807 as land tax to the gram panchayats. One-third of the hotels did not pay any tax. Last year, the gram panchayat of Mocha village in the buffer zone of Kanha decided to increase the land tax and enquired the hotels about the value of their properties. “None of the hotels but one responded,” says panchayat secretary Santkumar Markam.

The study by Karanth and Defries notes tourism in the protected areas employs less than one in 1,000 of the employable population in the region. Of those who are employed, most are trained for menial jobs like gardening and housekeeping. People from outside are employed for well-paid jobs like chefs and managers.

The Madhya Pradesh forest official’s survey estimates that 40-50 per cent of the total spending by a tourist goes to hotels and resorts, while 28 per cent of it goes to the communities and the rest to the tiger reserve. 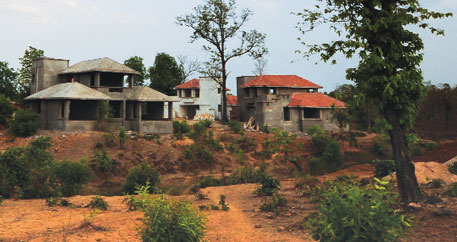 Hotel and resort owners are bending all rules to cash in on the tiger frenzy. The buffer zone of Kanha Tiger Reserve falls in the Schedule Five Area, where tribal land cannot be sold to a non-tribal without the district collector’s permission. Yet around 80 hectares, mostly farmland, was sold to outsiders between 2002 and 2008, notes the forest official’s survey report. Allegations are that the land has been bought by hotels and resorts through benami transactions.

One such allegation is on Taj Safari Pvt Ltd, a joint venture of Tata Group and &Beyond, a South African wildlife tourism company. A report by Equation, a Bengaluru-based non-profit, alleges that Taj Safari brought a tribal family from Chhattisgarh to buy land from the tribal residents around Manji Tola for its resort. A survey by the forest staff also shows that Taj Safari operates on the land bought in the name of a tribal family from Rajnandgaon of Chhattisgarh. When asked about the transaction, a spokesperson of Taj Safari admitted that the resort operates on a tribal land. “We have not bought the land but have all the requisite permissions to operate on it,” the spokesperson said.

Most residents are duped to sell land at rates much lower than the market price. When Down To Earth enquired about the land price around Kanha, property agents said land belonging to general category costs Rs 25-30 lakh per ha, while that of a tribal can be bought immediately at Rs 5-7 lakh per ha.

The communities benefit little from tourism, even as they face the brunt of conservation measures. So far, 28 villages have been relocated from the core zone of Kanha to give more space to tigers. Seven more are set to be shifted out. Several relocated families allege they have not received compensation yet. Pancham Singh Chachand of Manji Tola village is one of them. His family was relocated from Orai village in the core zone in 1974; he lost four hectares of land. “Tourists come to see tigers where we once lived but we are struggling for basic rights,” he says. The village has several resorts including one by Taj Safari but does not have power supply. 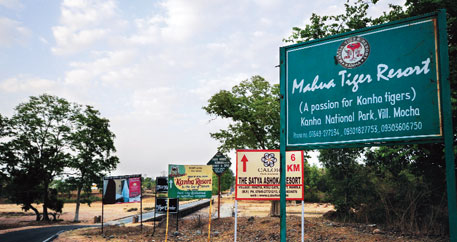 Resentment is brewing among residents like Chachand. On April 30, around 250 tribals and forest dwellers staged a protest against the forest department at the gate of Kanha demanding compensation for their displacement. They also demanded implementation of the Forest Rights Act of 2006 that recognises their rights over forest resources.

To ensure that tourism in protected areas helps generate livelihood for communities, while conserving forests, the Union Ministry of Environment and Forests has finalised the eco-tourism guidelines, in the works since June last year (see ‘Eco-tourism guidelines’ on facing page). On July 10, the ministry submitted the guidelines to the Supreme Court, which is hearing a public interest petition that seeks a ban on tourism in the core areas of tiger reserves.

Bhopal-based non-profit Prayatna had filed the petition in March last year. Prayatna’s secretary Ajay Dubey pleaded that critical tiger habitats should be kept inviolate of all kinds of human disturbances, including tourism.

The Madhya Pradesh government, tour operators in tiger reserves and a few well-known conservationists who own resorts in the reserves oppose the petition. They say wildlife tourism benefits conservation by increasing awareness and providing an extra layer of protection from poaching as tourists act as watchdog for activities in forest.

Countering the claims, Swathi Seshadri of Equation says, poachers usually operate at night when tourists are not allowed in the parks. Besides, tourists do not know the mechanism of the forest department. “How will they be able to monitor the wrongdoings?” she asks.

The tour operators’ lobby is influential. In September 2010 when the petition was originally filed in the Jabalpur High Court, the then chief wildlife warden of the state, H S Pabla, sent an e-mail to tour operators asking them “to make sure that PIL does not succeed”. The recipients of the e-mail included Tour Operators For Tigers (TOFT), an international body, renowned tiger expert and ornithologist Hashim Tyabji, who is a partner in a resort in Pench National Park, and Taj Safari.

That year the Madhya Pradesh forest department prepared a draft policy to lease parts of reserved forests outside national parks and sanctuaries to private companies who would “ensure conservation along with boosting their tourism businesses”. According to the draft, the forest department planned to divide forests into eco-tourism blocks of 50-150 sq km each and reserve them in the names of interested businesses through competitive bidding. This is despite the Forest Conservation Act of 1980 prohibiting state governments from assigning forestland “by way of lease or otherwise, to any private person, or to any authority, corporation, agency or any other organisation not owned, managed or controlled by Government”. The draft is pending with the state government.

An allegation of favouritism came to light in January 2011 when the Madhya Pradesh government granted &Beyond exclusive rights to make video footage of translocation of Indian bisons from one park to other. &Beyond owns resorts in four tiger reserves in the state.

J S Chauhan, field director of Kanha, admits that tourism is growing uncontrollably in tiger reserves. But instead of banning it in core areas, there should be strict guidelines for regulating tourism facilities in the buffer zone. After all, the benefit outweighs the cost. “By opening up one-third of the park for tourism we earn Rs 5 crore a year and utilise the fund for the management of the whole park as well as for the community development. This becomes especially important as the fund from the Project Tiger often gets delayed,” he adds.

The Kanha Tiger reserve has earned Rs 21.05 crore as tourism revenue in the past six years. The management claims to have transferred Rs 2.98 crore to the eco-development committees of the villages in the buffer zone for their development. This comes to just Rs 421 per family in 161 villages in the buffer zone in the past six years. “From this year onwards we will transfer 20 per cent of the revenue to the committees.”