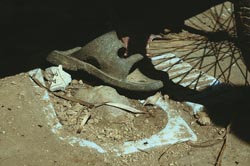 "Humne khule mein shauch jaane ki pratha chhod di hai (We have stopped defecating in the open)". Painted against a whitewashed wall of the primary school in Baruki village, Uttar Pradesh's Bijnaur district, the slogan claims victory in the battle against this practice. But the reality is a little different half-constructed walls, toilets without doors, a commode jammed into the ground, courtesy the centre's Total Sanitation Campaign (tsc), are common sights in the village. The battle is far from over.

"We have achieved reasonable success in tsc. People have been used to open defecation for ages and it is hard to change attitudes overnight. Cultural factors have hindered our work, but we have managed about 70 per cent sanitation coverage," says Bijnaur district's panchayati raj officer, A K Shahi.

Baruki does not bear this out. Out of 2,000 houses, only 269 have toilets.As for "cultural factors", discussions reveal a real demand for household sanitation villagers don't have any innate desire to defecate in the open. Women and elderly people are especially keen on toilets at home. "It's embarrassing for women to go into the fields," says Baruki's Mamra Singh.

A report by the Rajiv Gandhi National Drinking Water Mission estimates 30 million people in rural areas suffer from sanitation-related diseases. In economic terms, these cause a loss of 180 million man-days and Rs 1,200 crore annually.

In 1981, it was reckoned that only 1 per cent of rural India had sanitation facilities. In 1986, the first structured programme for rural sanitation--the Central Rural Sanitation Programme--was launched with minimal popular involvement. In 1999, the scheme was restructured. Its new avatar, tsc, was meant to make the scheme demand-driven and people-centred.

Government records show over 29 million household toilets have now been installed, resulting in rural sanitation coverage of 40 per cent. The government's aim is complete coverage by 2012. But crucial questions need to be asked, especially about technology and funds, before ambitious targets are set.

Akka Dilari village in Moradabad district was awarded the "Nirmal Gram Puraskar" in 2005-2006 for having eliminated open defecation. Technically, each household does have an attached toilet, but within a year of being built, a number of them have fallen into disuse.

The scene in front of Sabir Khan's house isn't pretty a toilet unit with an overflowing sewage pit next to it, barely 5 m from his hand pump. "The soak pit was not properly constructed and within a few months of building the toilet, filthy water began to accumulate in front of our home. Over time, water from the hand pump began to stink. So we gave up using the toilet," he says.

The official design for toilets is the single-pit, pour-flush latrine. Water has to be poured into the pan to flush matter into a soak pit, which allows liquids and gases to be absorbed by the soil while solid waste accumulates, to be cleared once in three to four years.

Uno Winblad, alternative sanitation pioneer, says the fixation with such technologies are linked to aid agency agendas. In a 2000 interview, he said "During the 1980s, international aid in the water and sanitation sector was monopolised by the World Bank's Technical Advisory Group (tag). The bank and tag had found 'the solution' and didn't want anything else... For Asia, it was the twin-pit, pour-flush toilet. And if someone tried to come up with alternatives, for example, dry, non-polluting systems entirely above ground, it was treated as heresy." 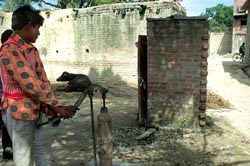 The disadvantage with the pour-flush toilet is it is a closed system with an underground pipeline. If that is clogged, waste accumulates and the toilet has to be junked. "If a toilet doesn't function, there is no one in the village to repair it. Either the owner does it or closes it down," says Rajbir from Baruki. Rajesh of Muzzafarabad village points to a commode buried under bricks "What do I do with this? I am ready to put in labour but the government has to give funds. They have dumped the material but there is nobody to build the toilet."

Water is also a problem. A 2003 un report says among the lessons learnt is the need for technology that accounts for water scarcity. It says "While in (tsc) special attention has been paid to provide and locate specific technological choices for the type of latrines and other infrastructure, more thrust is needed for technologies that especially address the issue of water scarcity." Dry toilets address both problems (see box Dry solution).


Rs 2,200 crore has been spent on tsc. In the 2007-08 budget, the finance minister promised to raise the annual outlay from Rs 720 crore in 2006-07 to Rs 954 crore. But the government's focus seems to be on increasing coverage at the cost of quality and popular involvement.

The official estimated cost for a toilet unit in Uttar Pradesh is Rs 1,900. The government gives a subsidy of Rs 1,500 while beneficiaries need to contribute Rs 400 in cash, material or labour. Gram panchayats are responsible for implementing the scheme and managing funds. However, rather than empowering people at the grassroots level, they seem to have become another cog in the bureaucratic wheel. Villagers complain about high-handedness, especially in financial matters. In Akka Dilari, people claimed contributions were always extracted, before work started, in cash despite the two other options. "The village head charges people as he wishes. While some villagers pay Rs 400, others pay Rs 350. Some are charged Rs 500," says Nadeem Khan, a villager. Other villagers corroborate this. Guddu Yadav, the pradhan, however, claims villagers don't contribute. "I put in money, nobody paid. In some cases, we had to resort to use coercion to get job done."

The other problem, villagers say, is that it is impossible to set up a decent unit for Rs 1,900. Dilshad Khan of Akka Dilari spent Rs 12,000 on two toilets. Munna Khan spent Rs 6,000 on two.