The Academy of Development Sciences has brought tribals in the Konkan region of Maharashtra together to make efficient use of scarce resources. 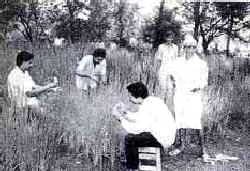 THE VILLAGERS of Gawandwadi in Maharashtra's Raigad district no longer fight over fish and water. Instead, they meet regularly to discuss strategies to share them. And, Dharmi Marohar Gavanda of the village, which is in Karjat tribal block, does not have to walk 3 km in the hot summer to fetch drinking water. "Now," she says, "I spend more time collecting minor forest produce."

The transformation of Gawandwadi into a self-sufficient village is the result of efforts by the Academy of Development Sciences (ADS), which mobilised the people to use their resources effectively and in a participatory manner. ADS, set up in 1980 under Bombay University's graduate volunteer scheme, emphasises the mobilisation of local resources. Besides tackling the water problem, its programmes encompass the conservation of genetic resources, sustainable farming and propagation of traditional medicine technologies.

The people in Karjat are poor and have been an exploited lot. To survive, they have had do several things that went against their basic culture, such as cutting down trees. Yet, 20 of them earned only Rs 700 for a truckload of firewood from valuable timber trees, compared to Rs 5,000 they could have got in the open market and much more if it had been sold as timber. According to ADS secretary Rajeev Khedkar, this was because contractors exploited the villagers and forest officials connived in the illicit tree felling. ADS' efforts have developed the people's self-confidence and reduced social tensions and exploitation. Says Khedkar, "The tribal people have a lot of resources, but they have to be motivated to use them efficiently."


It was such motivation that led to the construction of four earthen dams in Karjat block, where most of the annual 2,000 mm of rainfall disappeared as run-off because of the hilly terrain. Thanks to the dams, drinking and irrigation water are now easily available and villagers no longer have to spend a lot of their time fetching water.

However, building the dams was not that easy and was fraught with problems. Says Ullas Gore, ADS coordinator for watershed programmes, "Initially, it was difficult to mobilise the people. They opposed us and thought we were intervening unnecessarily." It was only after much persuasion that the first dam 11 metres deep and 100 metres wide -- could be built in Gawandwadi village. The dam cost Rs 5 lakh and was constructed in 1991 with local stones and red clay soil as mortar. Says Amitabh Mitra, an engineering student of the Indian Institute of Technology in Bombay, "Unless major calamities occur, the dam will stand for one century."

Arjun Pandurang Bhagat of Gawandwadi says the dam's storage capacity is sufficient to meet the people's needs even in summer. Crib dams (small contour bunds downstream) have been constructed for irrigating jowar, rice and maize.


ADS did not restrict its work to watershed management. It also got involved in the preservation of local rice varieties of the region, which are disappearing fast because of indiscriminate cross-breeding. Additionally, the Karjat agroecosystem is ideal for the propagation of seeds, which is one of the ways to preserve germplasm.

Says Ramdas Lende, ADS rice programme coordinator, "Traditional varieties are cultivated in the interiors and we convince farmers of the importance of collecting these varieties" (See box). ADS field staff visit the farmers during the harvest, discuss and identify traditional varieties and collect the seeds. After studying their origin, height, adaptability to local environment, yield potential and growth pattern, the crop is raised on ADS fields. Later, seeds are distributed free of cost to local farmers for multiplication and cultivation.

Every May, ADS supplies 2 kg of seeds, free of cost to local farmers for the kharif season. The paddy harvested with these seeds provides a substantial surplus of seeds, of which the farmers are required to return to ADS or give other farmers 4 kg.

ADS has developed a rice cloning technology, under which one good seed can be multiplied to raise 40 quintals of paddy in ten months. This quantity is sufficient to cultivate 40 ha in the subsequent season. Rice technologist R H Richaria says such seeds have greater resistance to disease, pests and drought and higher productivity. An added advantage is that home-grown waste material can be applied as crop nutrients.


The seed surplus has enabled the villagers to run a grain bank in 21 tribal villages of Karjat block with the help of ADS. Says Budhaji Dhama Bhala of Nagewadi village, "This system not only gives us food security and self-reliance, but also does away with exploitation by local moneylenders" (See box).

The grain is stored in bamboo bins that are kept either in temples or the house of the grain bank president. Khedkar says the grain bank scheme is more beneficial to landless sharecroppers, marginal and small farmers. Villagers borrow grain from the bank before the monsoon and repay it after the harvest with 25 per cent interest.

Realising the importance of the tribals' indigenous medicinal system, ADS began conservation and training programmes. Besides training doctors, midwives and tribal youth in traditional medicine, ADS maintains a gene park to conserve medicinal flora. More than 400 species of medicinal plants, which have been collected from the Western Ghats, are raised in the park. The plants were identified with the help of taxonomists from Pune's Agarkar Research Institute. The ADS herbal garden consists of 50 ganas (groups of 10 plants each). All the plants in a gana are useful in the treatment of a particular ailment.

A medicinal plant seed bank has also been set up to undertake seasonal seed collection and distribution. According to Suresh Kumar, ADS medicinal programme coordinator, 50,000 saplings are raised and sold for Rs 1 lakh annually. These include rare and endangered species like the serpentine root (Rauvolfia serpentina) and the kalihari (Gloriosa superba), which are banned from trading, says Kumar.

According to Tukaram Dharma Padir, a tribal who has used herbal medicines, the availability of herbs can help rural people achieve self-reliance in primary health care. Padir says serpentine root tubers, which are effective in treating gout, rheumatism and migraine, were once abundant in the hillocks but are rarely found now.

The work being done by ADS in Karjat has helped uplift the villagers. Such initiatives, however, need to be taken all over the country and sustained, if they are to significantly help the marginalised sections of our society and conserve the ecosystems of our villages.