Who is monitoring Lavasa?

Lavasa Corporation is rushing to complete its township in Western Ghats. No one knows if the promoter is complying with conditions on which it was allowed to resume work

Who is monitoring Lavasa? 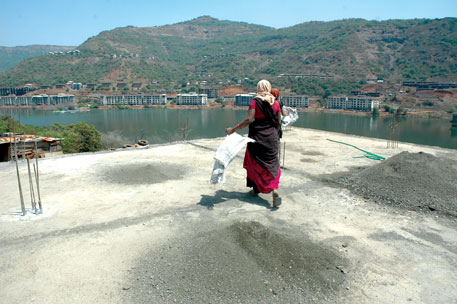 It has been nearly two years since the Union Ministry of Environment and Forest’s (MoEF’s) committees of experts set the ball rolling for restarting construction at independent India’s first hill station township, Lavasa. The high-profile project near Pune had come to a grinding halt in November 2010 after MoEF issued a stop work order through a show cause notice to its promoter, Lavasa Corporation Limited (LCL). The committees recommended environmental clearance to the controversial project based on several conditions (see ‘Committees and conditions’) and promises of strict monitoring.

However, those responsible for protecting the country’s environment appear to have forgotten about the project and its violations, let alone monitoring it.

An analysis of responses of officials at Maharashtra’s environment department and MoEF shows neither of them bothered to monitor the project even though the promoters resumed construction work on the city soon after receiving clearance.

Worse, the Maharashtra government seems to have forgotten a criminal case it filed against LCL bigwigs in 2011.

In a telephonic conversation with this correspondent, Lakhwinder Singh, MoEF’s Additional Chief Conservator of Forests in Bhopal who is responsible for monitoring projects in the Western Zone, admits that his department has never monitored whether LCL is complying with MoEF’s conditions. Senior officials at the state environment department say they are clueless about the independent 12-member expert committee that was to be set up for monitoring the project.

Since clearance, there have been only two instances of independent monitoring at Lavasa. Both of them were inadequate and questionable.

The tests were conducted by the Maharashtra Pollution Control Board (MPCB), which checked surface water quality alone, that too only at Lavasa. MPCB is expected to regularly monitor pollution related to water, air, noise and waste. LCL also claims to have conducted monitoring of its sewage treatment plants by an “independent expert” in one of its submissions to MoEF. But the report clearly mentions that it was prepared by a private consultant appointed by LCL and not by an expert appointed by any independent monitoring agency.

To its credit, though, LCL has ensured appointment of a private environment consultant for complying with MoEF’s conditions and regularly sent six-monthly reports detailing such efforts. Between November 2011 and May 2013, it had filed three compliance reports. As mandated in the clearance, LCL has also made them available on its website.

MPCB conducted its first test on December 29, 2012, and second on March 2, 2013. LCL’s surface water quality tests for its second and third compliance reports were done on October 6, 2012, and May 3 and 4, 2013. All the four tests were done for ensuring compliance with MoEF’s conditions mentioned in its environmental clearance, which read: “The surface water quality shall be monitored at all the locations shown in the EIA (environment impact assessment) report, for pH, BOD (biological oxygen demand), COD (chemical oxygen demand), lead, cadmium, mercury, chromium (VI), arsenic, nickel, cobalt and iron on six monthly basis and the reports shall be sent to MoEF and MPCB.”

MPCB did not even test samples from all locations as mandated in the EIA report. It left out the bustling Mugaon town, which was launched in March 2012 and focused only on Dasve town.

Test reports of LCL and MPCB differ even for samples from same locations. MPCB report accessed by Down To Earth does not mention the notable presence of E coli bacteria, an indicator of faecal contamination in water. This is when LCL reports showed E coli contamination in reservoirs and water released from treatment plants (‘Doubtful monitoring reports’).

A company spokesperson of LCL admitted to the presence of E coli. “As per our understanding, it is difficult to establish any correlation between the physical parameters of water and presence of E Coli which may be present in the surface water depending upon surrounding conditions and activities. LCL is not aware of water samples taken by MPCB during the same period and the test results of these samples,” said the spokesperson.

Why government failed to monitor

Singh says, “It is difficult to monitor each and every project in the absence of manpower.” MoEF officials at the Bhopal office say, “There are so many projects for a small office like ours to monitor that usually project proponents who submit compliance reports on time never undergo scrutiny, let alone ground inspections or field monitoring.” They concede that this does leave room for manipulation and misrepresentation, but there is little option in the absence of sufficient infrastructure. Apurba Gupta, a retired scientist from the National Environmental Engineering Research Institute (NEERI) in Nagpur, was one of the 10 members of the Naresh Dayal committee, set up by MoEF in 2011 to visit and assess the extent of environmental damage at Lavasa. Gupta says, “One has to prioritise which projects to monitor.” Of the 500 or 1,000-odd projects to be monitored, there may be only 15-20 projects that are ecologically sensitive. If MoEF fails to monitor the projects, it should appoint reputed agencies like IIT and NEERI to do the job, he adds.

When state environment department officials were asked why the 12-member monitoring committee was never formed, they expressed ignorance about the committee. Environment Secretary R A Rajeev said he has recently joined the department and so, has not seen the Lavasa file yet. Despite repeated attempts, then environment secretary Valsa Nair could not be reached for comment.

In October 2011, the Bombay High Court directed the Maharashtra government to take “credible action” against LCL within two weeks as a manner of demonstrating will to clamp down on the violations. Responding to this direction, MPCB filed a criminal complaint in the court of Chief Judicial Magistrate (CJM), Pune, on November 4 for LCL’s failure to obtain prior clearance from MoEF. Nine senior officials and six directors from the LCL’s board, including chairperson and managing director Ajit Gulabchand, were charged. But proceedings are yet to begin.

P K Mirashe, joint director at MPCB, who had filed the complaint, says, “The proceedings are yet to begin in the CJM court because Lavasa challenged the complaint in the Bombay High Court, which is yet to admit or dismiss LCL’s submission,” he says. An MPCB official, speaking on the condition of anonymity, alleged that the case was scheduled for hearing five to six times, but LCL officials ensured no progress.

The LCL spokesperson denied MPCB official’s charge, saying, “The Bombay High Court has stayed the proceedings and hence the question of matter progressing ahead does not arise. Therefore, the allegation of LCL deliberately trying to stall the matter is unfounded.”