Wooing back the salmon

International experiences in effective environmental management have their foundation in strict adherence to legal statutes. In this context, environmental laws are implemented with utmost precision in the West. Irrespective of the power of entrenched lobbies and attempts at filibustering, statutes laid down to safeguard the environment have to be abided by to the letter. So, if the salmon is endangered by the existence of dams, USA resorts to the only option available: dismantling the dams

Wooing back the salmon 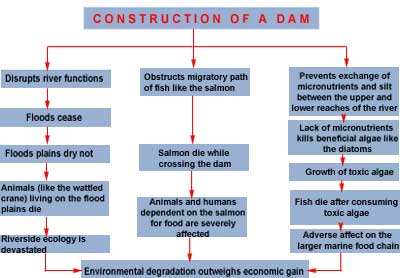 In a country like the us , laws once framed are supposed to be implemented. An excellent example is the Endangered Species Act ( esa ). Adopted in 1973, the law was framed with the sole intention of saving species on the brink of extinction -- saving them at all costs.

The salmon is one such species. A symbol of the health of a river -- in fact, the health of an entire ecosystem -- the survival of salmon is important for maintaining the continuity of the natural heritage of Western nations. According to Chris Zimmer of the us -based environmental organisation Save Our Wild Salmon, where salmon runs have become extinct, the local ecosystem has suffered. "Populations of wildlife, such as bear, eagle, mink and river otter, for whom the salmon is a source of food, drop drastically," he says, adding: "Besides the dangers posed to wildlife, the northwest forests in the us are partly built on the nutrients salmon bring back from the sea." Wild salmons are quite literally the energy fuels of the environment. Every individual salmon is important and when a river is dammed their very existence is threatened.

To save the salmon from extinction, the us government is at present imposing curbs on the construction of dams. Further, the us -based Federal Energy Regulatory Commission ( ferc ) is refusing to renew the license of those dams owned by private hydropower companies in view of the immense environmental damage. ferc is also demanding that fish ladders (special dam structures to facilitate the migratory path of fish) be built into the existing dams if their licenses are to be renewed. That is often so expensive that companies usually opt to destroy the dam instead. In a more drastic step, dams obstructing the migratory path of the salmon are being razed to allow the fish free passage. At least 100 dams have been removed from waterways in the us -- another 100 are either committed or are under active consideration for removal.

According to reports, about 75,000 big dams on us rivers bear testament to the conviction that any river flowing into the sea unimpeded is considered a waste of water and power. This attitude has, however, undergone a drastic change in the past four decades.

Construction of dams was the mantra of the 1950s. With the emphasis shifting to restoration of degraded aquatic environment, the '90s saw a drastic reversal: nations began to contemplate letting the rivers run free again. Why? The social, economic and environmental costs far exceeded the benefits (see diagram: Construction of a dam ). 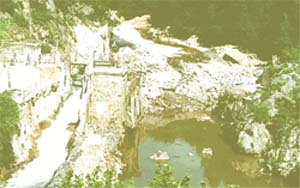 Extinct species: Not only have salmon populations been decimated, but entire stocks have disappeared. Prior to the 20th century, the Columbia River in the us Pacific Northwest supported some 200 distinct stocks of the fish. Today, 69 stocks have disappeared with another 75 on the brink of total extinction. Moreover, the presence of salmon across the stretch of the river has been reduced to 10-30 per cent of their original distribution.

A study in 1992, titled Pacific Salmon at the Crossroads , identified 214 wild spawning Pacific salmon stocks that were at risk of extinction, including 17 stocks that were already extinct. Though there are only five original species of salmon in the Pacific -- Chinook, Sockeye, Coho, Pink and Chum -- that face the threat of extinction, there are hundreds of other stocks with distinctive features which can be included in the esa .

As of today, there are no indigenous salmon runs in rivers draining into Lake Ontario in Canada. Neither are there any Atlantic salmon in the large rivers of the European Atlantic coast -- the Thames, Rhine, Seine or Elbe. In fact, the salmon has disappeared from more than 142 rivers around the Atlantic in the last century. To a query sent by Down To Earth , Henning Roed, marine coordinator, wwf -Norway, writes: "About 100 years ago, there were approximately 40 Swedish wild salmon rivers in the Baltic area. Today there are only 12."

Toppling the dams: The us led the world in dam-building -- harnessing rivers for a variety of purposes, including hydropower, irrigation, flood control and water storage. The us Army Corps of Engineers has catalogued approximately 75,000 dams greater than five feet along the waterways of the United States. Secretary of the Interior, Bruce Babbitt, recently observed, "that means that, on an average, we have constructed one dam every day since the signing of the Declaration of Independence (July 4, 1776)."

Today, the us views dams as the biggest menace to river ecology, wildlife, aquatic habitat of fish and ultimately humans. Recent research has also thrown light on the immense damage dams cause to the universal food chain by disturbing the breeding habitats of fish. The resulting alarm has given rise to a growing demand across usa and Europe to raze the existing dams (see box: The French crusade ).

Ironically, the us -- which had over the past 100 years championed the cause of dam-building -- is now ordering their destruction (see box: On the hit list ). The most sensational being the decommissioning of the Edwards Dam. Built across the Kennebec River in Maines, the 280 m high dam was destroyed in July 1999. The Kennebec ran free on its pre-determined journey to the Atlantic after 162 years of confinement.

Return of salmon: The opinion against dams is so strong in the us that several of these concrete giants, from California to Connecticut, have been demolished in the past four decades (see map: Down with the dams ). It should not take long to see results.

On the Butte Creek in northern California, removing three dams beginning in 1997 allowed the salmon run to jump from zero to 20,000. Those numbers have environmentalists and fisherfolk eyeing dams in the Olympic Peninsula, where dozens of populations of salmon are endangered or extinct. Another instance is the Edwards dam, which, prior to its demolition, was taking a huge toll of the Atlantic salmon population by flooding their habitat and preventing migration. The dam's demolition, besides providing respite to the salmon, also benefited the population of nine other species of migratory fish, including the American shad, striped bass, Atlantic sturgeon and alewives.

The Quaker Neck Dam on the Neuse River in North Carolina, for example, came down in 1997-98 and today the bass and striped shad are already running free in the river.

Cost of pulling down dams: The debate on the cost for dismantling the dams has been raging for several decades and it's only recently that some dams have been decommissioned. "Dam breaching used to be laughed at," says Chris Zimmer of the Save Our Wild Salmon Organisation, a us -based environmental group, "but now it is a definite possibility."

Recently, reports from the Drawdown Regional Economic Workgroup ( drew ) -- a us -based committee comprising economists and analysts from the government, universities and the private sector -- estimated the direct costs of removing the four Snake River Dams, owned by the Army Corps of Engineers. The cost stands between us $800 million to us $1.1 billion.

In usa , the river conservation organisation American Rivers released the cost figures for destroying the Elwha and Glines Canyon Dams (owned by James River Corporation/ Daishowa Corporation) on the Elwha River in Washington. It quoted us $113 million.

Despite the opposition from political heads and hydropower companies against dam destruction, the emphasis in usa is firmly on restoration of salmon population, even if it means razing the dams. Environmental degradation by dams is also kept in check by monitoring the renewal of dam licenses and also by refusing permission for the construction of dams on eco-sensitive rivers. Strict implementation: In the us , there are over 2,400 hydropower dams not owned by the government. These private dams come under the jurisdiction of the Federal Energy Regulatory Commission ( ferc ) which issues licenses for a period of 30-50 years for new and existing dams. These licenses impose several conditions on the operation of dams such as minimum water flow, means for fish passage, recreational access and management of the land in the dam site. When a dam's license expires, the private company must apply to ferc for renewal of the license. At this junction, the government body Hydropower Reform Coalition steps in.

The coalition, formed in 1992, is a panel comprising national, state and local conservation and recreational organisations. Its main function is to reform the way ferc licenses all hydropower dams and improve rivers altered by hydropower dams. In each relicensing by the ferc , the coalition seeks the following key conditions:

Until 1993, renewal of licenses was done without so much as a whimper. Today, the relicensing process provides an excellent opportunity for the public and government agencies to argue for dam removal, specially if it has outlived its usefulness.

What can India learn from all this? In India, too, the government frames elaborate environmental laws. But they are almost never implemented. Unlike the us , which adheres to its policies and laws, developing countries like India treat environmental regulations with utter disregard. The regulations are meant only to be kept on paper while the administration caters to the whim of vested interests all the time. Pollution in all its manifestations -- such as air, sound, water, environment -- have elaborate laws to bring about restorative measures. Take, for example, the Air Pollution Control Act framed in 1981. Despite the comprehensive restorative measures that need to be taken under the act, air pollution levels have hit an all-time high in Indian metropolitan cities as well as small towns. "The present state of affairs exist because the powers these laws transfer to enforcement agencies are never invoked adequately to make any effective impact," says Anumita Roychowdhury, coordinator for the Right to Clean Air Campaign, Centre for Science and Environment.