Poet and writer ALI COBBY ECKERMANN was in India recently to launch her memoir, Too Afraid To Cry. The book is an account of her growing up as a child of the Stolen Generations, children of Australian Aboriginal people who were forcefully removed from their families and sent to white foster homes. Her novel, Ruby Moonlight, set against the massacre of Aboriginals by white settlers in South Australia in 1880, won the "book of the year" award at the 2013 New South Wales Premier's Literary Awards. She talks to RAJAT GHAI about the discrimination faced by her people and their continuing fight for rights. Edited excerpts 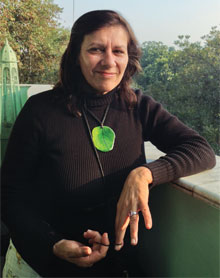 The history of the Aboriginal people in the past 300 years has been marred by discrimination and injustice. Will the 21st century be any different?

As a writer and artist, I would like to hope we are making inroads. There have been some wonderful books recently by authors such as Kim Scott, Alexis Wright and Bruce Pascoe who are determined to retell the painful chapters of our history. The problem is that we do not have a representation in the educational curriculum, so the learning of our history and culture seems to be quite muted.

Is Aboriginal history not taught in Australian schools?

I don’t think it is a compulsory subject in school textbooks, so a majority of Australians do not know about our background. What has been a success is the National Indigenous TV channel, which has been on air for two years. Now mainstream Australians are able to look at documentaries and other programmes on Aboriginal life. It is hard for a society where denial has been so inbred to come out of it. And that is the problem in Australia. People still do not trust us to be a part of mainstream life. I hope to see the country as a peaceful, multicultural nation before I die, for the sake of my grandchildren. I am light-skinned and have been lucky to not have been differentiated. But the same has not been the case for most Aboriginal people, who are treated much better in other countries than in Australia. For example, when I travel with my Aboriginal family within the country, it hurts to see them being denied access to a café or a restaurant or never be invited to a white person’s home.

So racism is still very much alive in Australia, more so towards the Aboriginal people.

What is the significance of land in Australian Aboriginal culture?

In traditional Aboriginal culture, we belong to the land; the land does not belong to us. Our chukapa, or traditional folklore, bestowed individuals with responsibilities to preserve the Aboriginal rituals and practices and keep the spirit of the country clean, alive and strong for future generations. The land was our church and also our library. Stories were painted on the skin and drawn in caves and in the sand. People might say this is not literature, but for us, it was. We had a relationship of trust with the land and there was no need to archive it for future generations. It was an altogether different way of life which we have lost since colonisation. Today, we find it really difficult to adjust in the modern society, which is ruthless when it comes to us and our relationship with the land.

Prior to the colonisation of Australia, was there a concept of owning or possessing land among the Aboriginals?

No. It was never a literal sense of ownership for us. Each tribe had its patch of land dictated by chukapa. And in that patch was found all the nourishment—food, meat, vegetables and so on. I am from the desert of South Australia. My people, the Yankunytjajaras, had to walk a lot farther for finding food than the people on the coast. But we were also farmers practising ‘fire farming’ or slash-and-burn cultivation. As the men of the tribe travelled, they would burn the indigenous grass, knowing that in 6-12 months, it would regenerate and be a source of food. In the desert, water was one of the key elements and much care was taken of the waterholes. When white settlers brought cattle and sheep to the deserts, most of these waterholes were completely damaged.

Without formal ownership, can the Aboriginals stake a claim on their land?

I am not a lawyer, but my understanding is that the Aboriginal people, in recent years, have been given back their ancestral land, the so-called “native title”. But there is a clause that says no commercial development can be undertaken by the Aboriginals. This means you can negotiate with white people for development on your land, but you cannot own your own business. Aboriginal land is for residential, cultural and religious purposes only. The issue is being debated in Australia, but I don’t think we will come to a healthy compromise anytime soon.

Last year, Australia signed a nuclear deal with India. Considering the debate over nuclear waste and its impact on land, are you apprehensive of the deal?

The problem of nuclear waste has no human element in it. The rich and the powerful in Australia know about its potential dangers, but they are going to shove it on Aboriginal land, saying it is rubbish land since the owners are voiceless and disempowered. But it is not. There are people living out there with a rich culture. What is the need for nuclear power when there are alternatives? And where does the nuclear waste go? Please do not send it back to us.

Did you participate in the Australia Day protests by the Aboriginals held in Canberra on January 26? What were the main demands of the protesters? Do you foresee more such protests?

I was in transit from India when the protests took place, but I was following the events. It is a time of protest at the Aboriginal Tent Embassy in Canberra, which is a significant echelon of the Aboriginal community to voice their grievances. It is a time to remind the elected Australian government that the Aboriginals never ceded their land willingly and are now demanding ownership of their land. The Aboriginal voice is growing louder against the government’s racist policy, funding cuts to essential services and the proposal to close down 180 Aboriginal settlements in remote western Australia.

What is your message to the tribal people in India who are fighting for their rights over forests and land?

A united and clear voice is needed. But unity can only work best when each and every issue is given equal importance. And always let your cause reflect your traditional values because culture is an essential weapon.