"We have to produce more rice using less water" 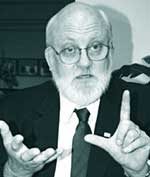 What are the new challenges for scientists who research on rice?

We don't have much water for agriculture today. So, we have to produce more rice using less water. Then, agriculturists have also diversified into other crops, so we need rice varieties that take up less land. There are also fewer agriculturists today. So, we need rice varieties that require less labour inputs. In other words, we require improved rice varieties with lesser inputs. These varieties should be tolerant to drought, flood and salinity and other abiotic stresses. Synergy between the disciplines of crop development and crop management, and an adequate understanding of the environment is necessary to ensure sustainable rice production.

What is IRRI doing to achieve such synergy?

irri has undertaken a number of initiatives to make rice farming, more environment-friendly.For example, the institute has devised crop management techniques that reduce insecticide application by 98 per cent.

How can one reduce emissions of greenhouse gases (GHGs) from rice fields?

Its true that rice fields emit ghgs. But there is a myth that methane is the main culprit. In fact, rice fields emit a much more noxious gas, nitrogen oxide (no2). The gas remains in the fields in a dissolved form. But once the fields go dry, the no2 is emitted into the atmosphere. Efficient nitrogen use can check such emissions.

So-called improved varieties of rice have replaced traditional varieties in large rice-growing areas. How has this affected the biodiversity of the world's most preferred cereal?

Agricultural scientists such as M S Swaminathan perceived this problem as early as the 1960s. Under their guidance, irri commenced a programme to collect germplasm of traditional varieties and their wild relatives. Today, the institute can boast of about 1 lakh varieties of a total of 125,000 varieties known to the humankind. This collection includes several traditional varieties native to war-torn countries such as Cambodia . Many biotechnologists have tapped this repository to source unique traits of traditional crop varieties.

Have we lost any crop varieties?

It could have happened, but I can't say that for sure. A number of traditional varieties in Eastern India are yet to be explored and protected.

Today, the private sector dominates agricultural research in most parts of the world. What does that mean for food security?

Yes, the private sector has influenced the creation of a restrictive intellectual property rights regime, which is detrimental for food security. Even then, we are in constant dialogue with private sector agriculture companies to source any private research that could help poor farmers.

But we have to tread cautiously. Earlier, the irri made its germplasm available to everyone. We made no distinction between the public or private sectors in this respect. But we aren't that open anymore; we fear that our work might be misappropriated.

How should farmers in tsunami-affected areas overcome the handicaps of the tragedy?

The tsunami has ravaged humongous tracts of cultivable rice area in many countries. Extra saline water and loss of micronutrients is an overwhelming problem for rice farmers in areas hit by the tragedy. These agriculturists should try and get salt out of their fields by regular irrigation methods. In rainfed areas, farmers should delay sowing till the monsoon sets in.

What are your views on the on the controversy over the golden rice?

I'm extremely disappointed with those people who are against golden rice only because it involves biotechnology. Golden rice is a serious attempt at solving some of the world's most important nutritional problems and shouldn't be condemned. Second generation golden rice can provide up to 23 times more pro vitamin- a than the first generation. We must remember that science is a progressive discipline and things get better with time. We should never kill the baby before it's even born.

What are IRRI's initiatives to improve the yields of small and marginal farmers?

Scientists at the institute are working to create drought-tolerant varieties; research is also underway on varieties that are tolerant to water submergence. But you must appreciate that it's very difficult to improve matters on small land holdings, especially for cereals such as rice.

Any plans for India?

Eastern India has a wide collection of rice germplasm. My personal passion is to position this area as a major rice centre, globally.