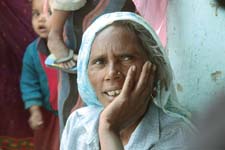 shakuntala, 60, of Chamarpura village in Moradabad district in Uttar Pradesh continues to carry her traditional occupation of manual scavenging. She has no other alternative. On March 18, 2007, the National Human Rights Commission (nhrc) came down heavily on non-compliant states to adopt the Employment of Manual Scavengers and Construction of Dry Latrines (Prohibition) Act, 1993, at the earliest. It has set a target of 2007 for the complete eradication of the practice of removing human and animal excreta using brooms, small tin plates, and baskets from dry latrines and carrying it--on the head--to disposal grounds some distance away from the latrines.
nhrc has also asked them to conduct fresh surveys to identify human scavengers and rehabilitate them.The non-compliant states and union territories include Jammu and Kashmir, Manipur, West Bengal, Dadra and Nagar Haveli, Daman and Diu, Lakshwadeep and Puducherry.

"Law and schemes are in place but without results," says Justice Shivaraj V Patil, chairperson, nhrc. There are about 770,000 scavengers in India. About 340,000 need to be rehabilitated under the National Scheme for Liberation and Rehabilitation of Scavengers, implemented by the Union ministry of housing and poverty alleviation (mohpa).

nhrc also recommended that individuals who do not convert to flush latrines, besides making provisions in building by-laws mandatory, should be punished. "There are about 600,000 dry latrines in India which need to be converted to flush latrines. We have asked all states to verify the current status", says S K Singh, joint secretary, mohpa. "There are about 65,000 manual scavengers in Gujarat itself. The government underrates the menace. It should introduce machines and allocate funds for the same," says Manjula Pradeep, director, Navsarjan, an ngo in Gujarat.