Rice, integral to Madagascar, may be hastening the decline of its unique biodiversity; here is how

Madagascar is a biodiversity hotspot; most of the plants, animals, insects and fungi found there are not found anywhere else 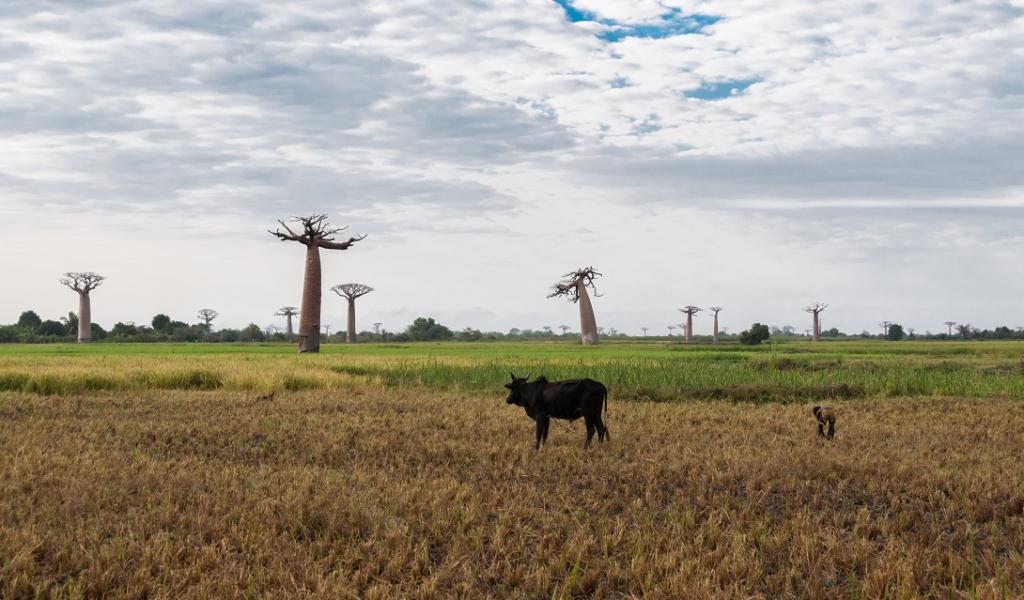 Rice and zebu cattle have had the largest impacts on the Madagascan landscape as a result of their vital role in sustaining human populations. Photo: iStock

Rice, the main food crop of Madagascar, could be hastening the loss of biodiversity in the fourth-largest island of the world, according to two exhaustive studies published in the Science journal December 2, 2022.

The cultivation of rice on the island, especially using shifting agriculture, is causing deforestation and subsequent biodiversity loss, according to the research papers.

The papers also urged that collection and analysis of data on Madagascar’s remarkable biota must continue and accelerate “if we are is to safeguard this unique and highly threatened subset of Earth’s biodiversity”.

Madagascar, classified as a ‘Least Developed Country’ by the United Nations, has been in the throes of upheaval in the past few years.

Drought has been affecting vulnerable regions over the last four decades. More than one million people needed food emergency assistance in the island country in 2020.

Climate change has wrought havoc on the island, with the latest being Tropical Storm Ana earlier this year.

Rice cultivation was brought a millennium ago to Madagascar by Austronesian peoples, who are thought to have sailed to the island from the Indonesian archipelago in outrigger canoes.

Rice is integral to Malagasy cuisine. On average, each Madagascan eats 120 kilogram of rice or vary per year.

Madagascar’s extraordinary biodiversity: Evolution, distribution, and use, one of the papers published December 2, noted how rice had changed the Madagascan landscape:

Since settling on the island, humans have introduced crops and livestock for agriculture and husbandry. Of these, rice and zebu cattle have had the largest impacts on the landscape as a result of their vital role in sustaining human populations.

Rice is currently widely cultivated both in the Central Highlands (using paddy production) and in the humid east, where swidden agricultural methods are used (ie, shifting cultivation involving clearing forest for conversion to cropland, usually by burning).

“Our analysis of IUCN assessments indicates that overexploitation and agriculture are the most frequently listed threats to Malagasy fauna (excluding invertebrates) and flora, mirroring global findings,” Madagascar’s extraordinary biodiversity: Threats and opportunities, the second paper, noted.

The paper said agriculture primarily led to deforestation on the island. Some 44 per cent of the land covered by native forest in 1953 was deforested by 2014.

“Deforestation in Madagascar reflects global patterns and is primarily driven by the small-scale but widespread practice of swidden agriculture (also known as shifting cultivation; in Madagascar referred to as tavy for rice cultivation in humid and subhumid areas and hatsake for cassava and maize in dry and subarid areas),” the paper said.

Additionally, cash crop production, particularly maize and peanut, had become a major driver of deforestation alongside the production of products for international markets, such as forest-derived vanilla, it added.

The researchers added that the trend of increasing deforestation rates will continue, as people clear land for agriculture with small-scale fires.

Natural system modifications add to deforestation. They threaten 23.2 per cent of vertebrates and 68.9 per cent of plants.

“Some predictions indicate that in the absence of an effective strategy against deforestation, 38 to 93 per cent of forest present in 2000 will be no longer present in 2050,” according to the authors.

Madagascar is a biodiversity hotspot. Most of the plants, animals, insects and fungi found on the island are found nowhere else in the world. Some 56 per cent of the island’s birds, 81 per cent of freshwater fishes, 95 per cent of mammals, and 98 per cent of reptile species are endemic.

Madagascar, along with India, was part of Gondwana, one of two supercontinents formed millions of years ago. South America, Africa and Australia too were part of the great landmass.

Madagascar later split and moved till it reached its present position in the Indian Ocean, separated from Africa by the Mozambique Channel. This relative isolation enabled the high endemism among its biota.

But knowledge about Madagascan biodiversity still remains poor, something which the papers delved upon.

Despite the global significance of Malagasy biodiversity, many taxonomic groups remain poorly known, and Madagascar ranks among the top countries for the predicted percentage of terrestrial vertebrates lacking scientific description, Madagascar’s extraordinary biodiversity: Evolution, distribution, and use said.

Considerable work remains to be done to fully characterize Madagascar’s biodiversity and evolutionary history, it added.