Dry to deluge: Incessant rain a threat to Marathwada farmers

After scanty rainfall in June & early July, Maharashtra region now has a problem of too much downpour in too short a span 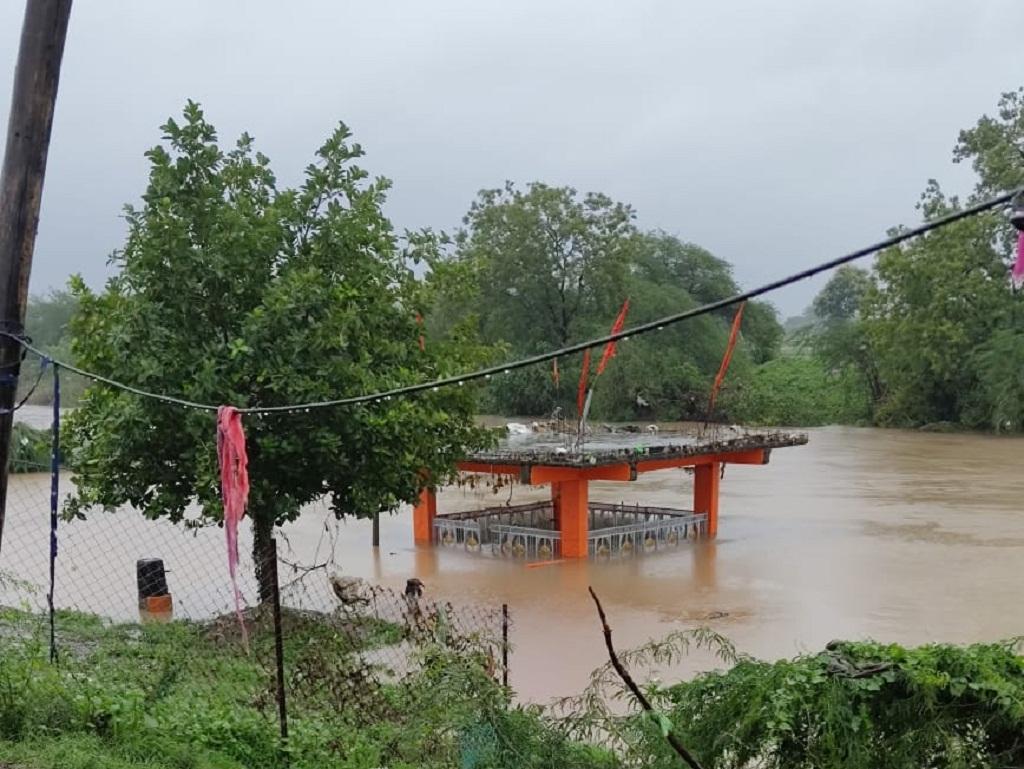 Incessant rain in Marathwada, which was going dry not so long ago, has turned a threat to farmers.

Rain in the last 15 days has damaged about 100,000 acres of agricultural land in Maharashtra, according to officials. Vidarbha region has also reported major losses.

The state received over 35 per cent more rainfall in July, recording 459 mm against the expected rain of 340 mm. Several districts reported rainfall 200 per cent above average.

The weather conditions are likely to persist through July 16.

A farmer from Kurunda village in Marathwada said the erratic rains had destroyed 15 acres of crops. “I lost my soybean and turmeric plots overnight due to the unceasing rains on July 12,” lamented Ashok Dalvi.

Dalvi had been eagerly waiting for the monsoons for respite but has now lost all hopes of a successful harvest. He had spent Rs 70,000 on sowing and fertilisers. “The excessive rains have washed my investment down the drain,” he told Down to Earth. 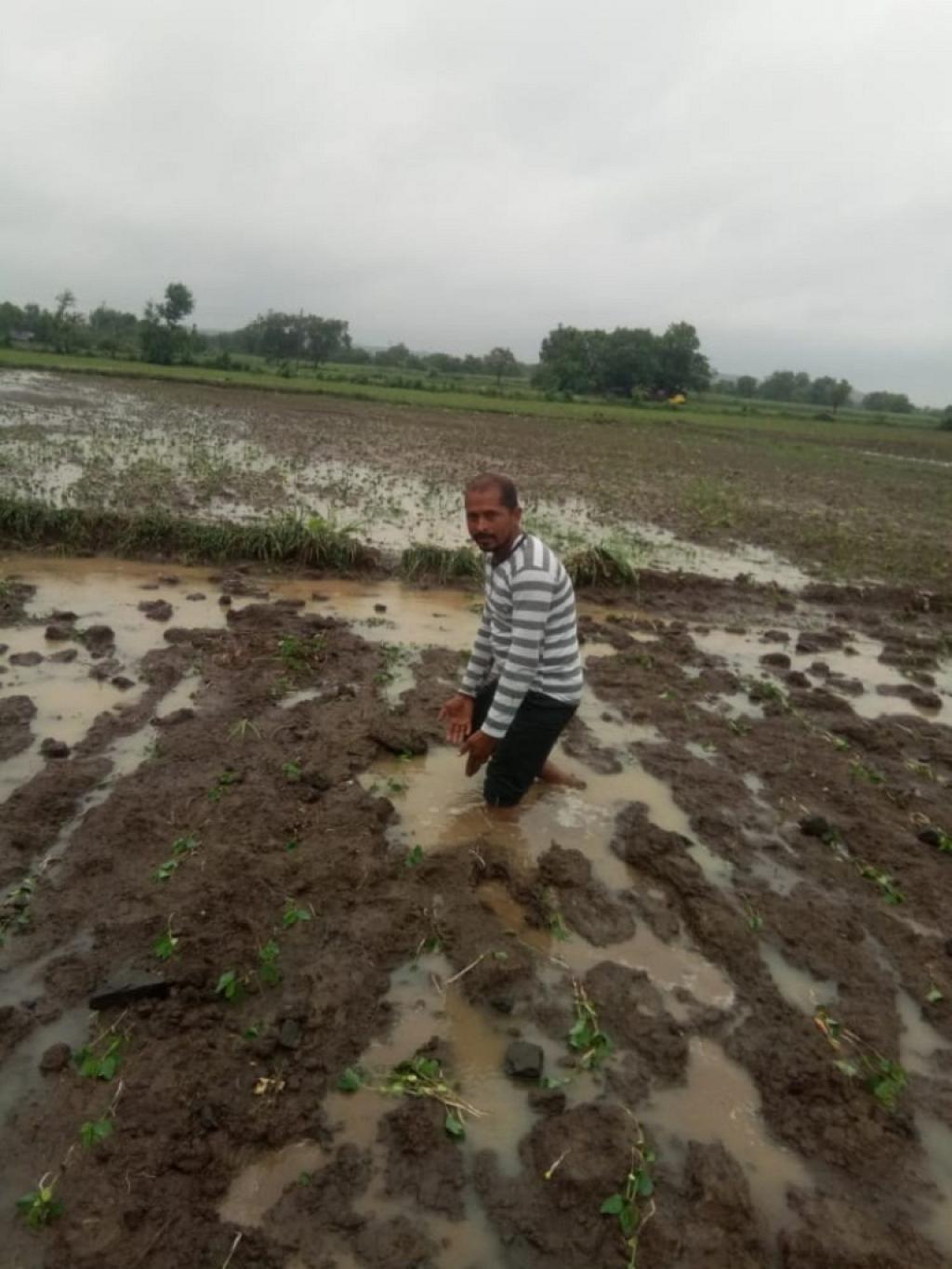 Farmers said their crops had been destroyed by the deluge

About 55 per cent of Marathwada region and around 40 per cent of Vidarbha has been severely affected by the rain, said Dheeraj Kumar, state agriculture commissioner. Around 100,000 acres of agricultural land has been destroyed, he said.

Kumar said Aurangabad district has received 206 per cent more rainfall in July already, with 132 mm rainfall against the 68 mm average.

The official record from the divisional commissioners showed that rain in Hingoli district deviated by 303 per cent, recording 353 mm rain against an expected 116.

The scenarios in other districts were similar. Drought-affected Latur received 66.8 mm of rain in 24 hours, Osmanabad had 42.5 mm.

Nanded district received an average of 123mm rainfall over a 24-hour period, officials had reported on July 13.

The head of the Kurunda village, Rajesh Patil, said that 20,000 farmers in Hingoli district are facing a fate similar to Dalvi.

“The entire village is affected because of the incessant rains,” said Patil. “The agricultural land is submerged, plots and cattle have been washed away and there is no guarantee that resowing will lead to a harvest.”

The rain over the last fortnight has affected 70 per cent of agriculture production in Marathwada, said Jayajirao Suryawanshi, a farmer activist.

“Incessant rainfall in various pockets has damaged crops like tur dal and cotton. Meanwhile, several parts of the region have not received rain. These farmers are also staring at heavy losses,” he said.

Suryawanshi claimed that several suicides by farmers had also been reported.

Official figures from the divisional commissionerate showed that as many as 306 cases of farmer suicides had been confirmed in Aurangabad for June.

The erratic rains have made farming a hazardous profession, Suryawanshi told DTE.

“Marathwada did not receive much rain in June and early July. But the rain intensity increased in the last few days and covered the deficit. But rains like these can lead to crop damage instead of being beneficial,” he said.

He said that farmers would be in an even trickier situation if rains pause entirely for the next 15 days of the month.

Areas that received more than 90mm of rainfall within 24 hours can be categorised as having received excessive rainfall, said Uday Deolankar, former agriculture advisor with the state government.

“However, the areas that have received it traditionally receive more rain,” Deolankar added.

The cause of excess rain

An increase in the severity of east-moving easterly winds and west-moving winds, or westerlies, have caused high-pressure conditions in central Maharashtra, causing rains, Deolankar said.

But the expert pointed out that rains recorded in low-intensity regions have also resulted in flooding or water stagnation.

This is because the concentration time has been reduced. “The time of concentration is the period required for rains to drop in the catchment area and flow downstream,” he said.

There are fewer hurdles due to rapid urbanisation and surface run-off allows water to flow faster, leading to flooding.

He added that delays in monsoons have already pushed the sowing season and the incessant rains may lead to losses.

“The rainy conditions are likely to improve after July 14. The rainfall and the weather conditions in the next two days will help us understand the gravity of losses,” Deolankar said.

Kumar said the data had been shared with the officials concerned, who will estimate the losses and issue guidelines for compensation to farmers.