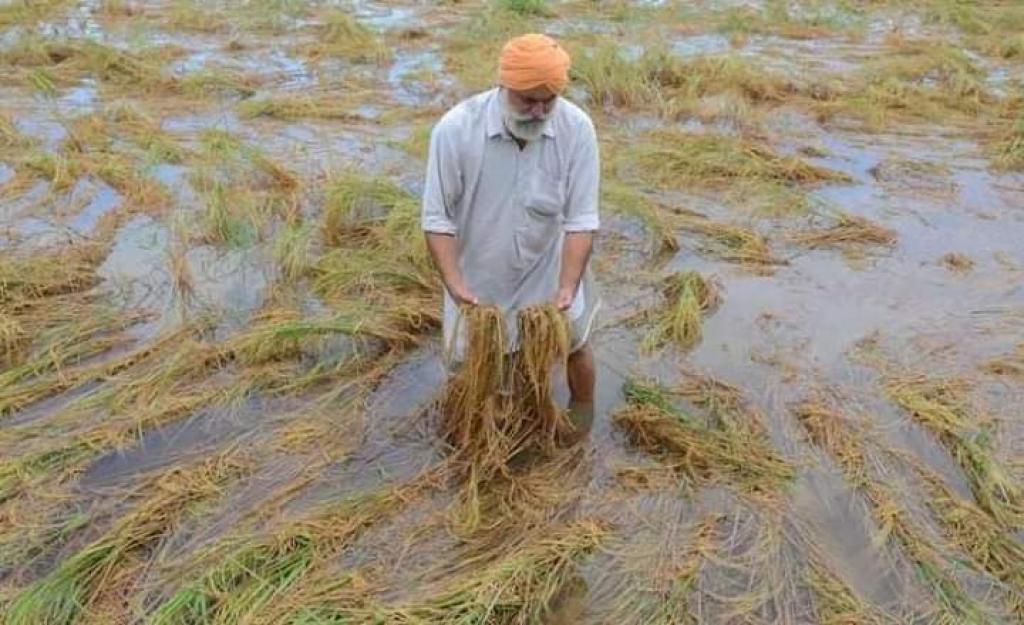 Around 134,000 hectares of paddy crop in Punjab might have been destroyed by the heavy rain. Photo: @NavroopAgrifarm / Twitter

This has not been a good year for agriculture. Heatwaves and scarce rain during monsoon 2022, followed by heavy rain last week, destroyed standing crop across vast stretches in Punjab, Haryana and Uttar Pradesh.

Sukhdeep Singh, a farmer in Punjab’s Ludhiana district, has been facing losses throughout the year. Heavy rains destroyed his potato crop on January 7, 2022.

After this, the severe heat in March-April 2022 shrank his wheat crop. Singh had planted wheat on 18 acres. He usually cultivated 20-22 quintals per acre but could only harvest around six quintals per acre this time.

Singh again faced losses of Rs 2.5 lakh from the wheat crop. To make up for it, he leased additional land for paddy cultivation. Usually, he plants paddy on 30 acres of land, but this time he planted paddy on 35 acres to make up for his losses.

However, Singh’s hopes were dashed when the paddy crop was ready for harvest. Heavy rain on the night of September 25 completely flattened the crop. The paddy grain soaked water and swelled.

“My fields are still logged with water,” Singh told Down To Earth. “I can only calculate my losses once the water dries up. An acre produced 30-32 quintals of paddy. I will lose Rs 3-4 lakh over the damaged crop.”

Singh’s suffering is shared by farmers Jogendra Singh of Haryana and Sunil Kumar of Uttar Pradesh. There may be a distance of several hundred kilometres between them, but all three suffered major losses due to heavy rains last week.

His cotton crop has spoiled completely. Paddy harvest has been delayed, but he hopes to save around half of it. Jowar and bajra also seem to be completely spoiled.

Jogendra’s losses go into lakhs of rupees, but he is also worried how to feed his cattle as the jowar crop can not be saved.

Read more: Monsoon 2022: Why a drought wasn’t declared in 4 states with drought-like conditions

Kumar is a farmer from Kasganj in Uttar Pradesh whose joint family has 20 acres of land. “I grow paddy and sugarcane in the Kharif season. There was no rain in June-July, so I could not plant paddy them. I had to use water from tube wells to plant it later,” he told DTE.

The paddy crop was almost ready for harvest when the heavy rains struck last week. Now, Kumar’s crops lay flattened. “I don’t know if I can harvest anything,” he said.

There was very little rain in these three states in monsoon 2022, which affected agriculture. The few crops that were planted were destroyed by the heavy rain last week.

There were drought-like conditions in several states until last week. Now, the governments are under pressure to compensate for the damage caused by the rains.

Crops destroyed by the rain will be documented, Punjab Agriculture and Farmers Welfare Minister Kuldeep Singh Dhaliwal has told reporters. Around 134,000 hectares of paddy crop in Punjab might be submerged in rainwater right now.

The Haryana government has also started the process of compensation for the damage caused by heavy rains. An online portal has been created and farmers have been asked to upload the information about their losses in 72 hours.

The patwari will review the applications, inspect the farms and then fix the compensation.

The government had earlier announced paddy procurement would begin October 1. However, farmers of Ballabhgarh said they do not have enough paddy left to sell.

The farmers had sown paddy earlier this time so that the crop reached the market by October and they could begin planting wheat on time in November when the fields become empty. However, this time only the late paddy crop is expected to survive.