Haryana hurdle: Paddy procurement season on, but farmers have no buyers 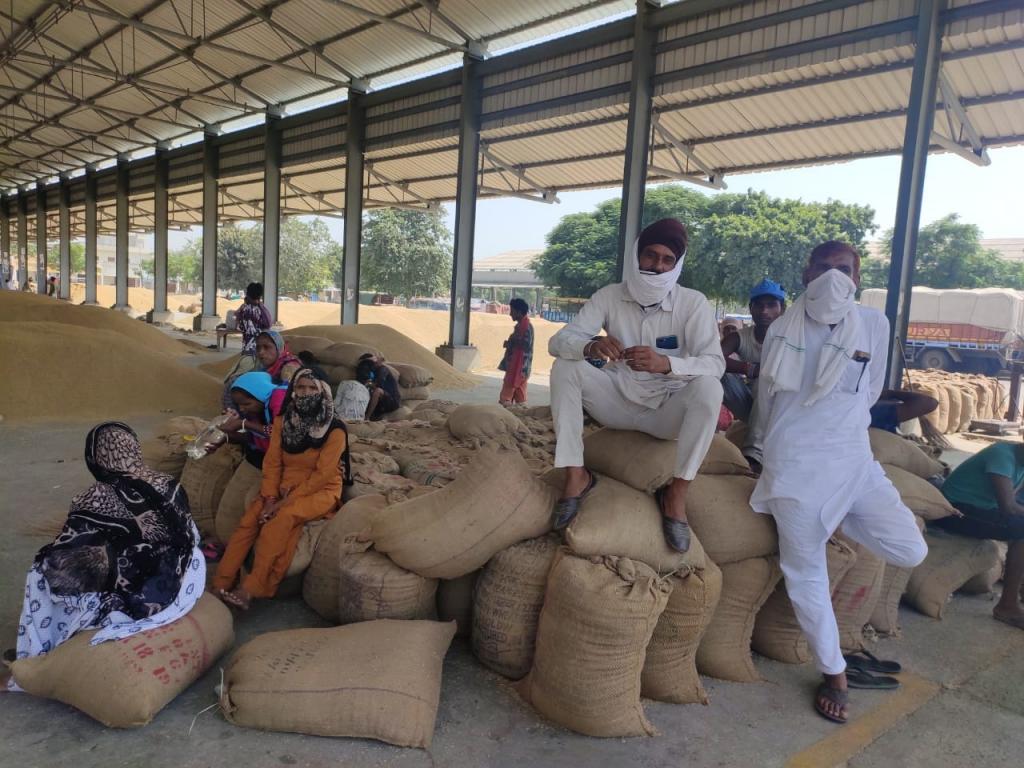 At an APMC mandi in Karnal. Most farmers have complained about the crop losing their colour and getting damaged. Photo: Shagun Kapil

An unusual scene has been playing out in agricultural produce market committee (APMC) mandis in Haryana for the last few days: Freshly cut paddy crop enters the mandis in hoards, but little leaves the yards.

The Haryana government had announced direct procurement of paddy crop from farmers at minimum support price (MSP) September 27, 2020 onwards, but the plan has hassled Arthiyas (commission agents), rice-millers and farmers. Arthiyas and rice millers have been on strike at several mandis to oppose the direct procurement.

The Union government procured 44,809 million tonnes (MT) paddy from Punjab and Haryana through September 30; only 3,506 MT was procured from Haryana. The Centre announced paddy procurement on September 26, earlier than the usual October 1.

Most farmers, however, have been stripped of buyers and compelled to dump their crops at APMC yards. They have complained about the crop losing its colour and getting damaged.

As the crisis spiralled into a full-blown strike, farmers stayed put in their yards with their crop that is gradually rotting. Under normal circumstances, the produce would be sold within 24 hours of being brought to mandis.

Chief Minister Manohar Lal Khattar had announced direct procurement of the crop from farmers and its transportation to the rice mills. Under an earlier arrangement, millers would buy the crop on behalf of government procurement agencies such as Food Corporation of India (FCI), Haryana State Co-operative Supply and Marketing Federation Ltd (HAFED), Haryana Food and Civil Supplies Department and Haryana State Warehousing Corporation.

The new arrangement, however, introduced a barrage of problems for Arthiyas as well as farmers. Down to Earth visited two APMC mandis in Karnal and Kaithal districts of Haryana on September 30 to understand their concerns.

The permissible limit for moisture content in paddy crop for its procurement was 17 per cent. Under the previous arrangement — when rice mills would buy the crop on behalf of the state government — either the crop was dried in the yards or sold with high moisture content at a price cut.

This has given the government officials — the ones buying on their own — a reason to reject the crop, claimed farmers.

“A government inspector came to check the crop on September 27 and rejected it saying it has 22 per cent moisture content. I am eager to sell my crop, so I asked them to cut from the MSP for excess moisture, but he didn’t budge. It’s just an excuse. We don’t have any facility or space to dry our paddy or keep the moisture in check,” said Harish Bhatia, a medium farmer from Kachhwa village in Karnal.

Bhatia has been at the mandi for the last one week.

He added that earlier, the Arthiyas negotiated with millers on farmers’ behalf, who then bought the crop with high moisture at a reduced price and dried it themselves. “But this time, government officials have been citing high moisture content and not buying the crops,” he said.

Narwair Singh from Karnal’s Gonder village claimed the officials “harassed” farmers. He came to the mandi on September 29; since then his crop has been lying at the yard. 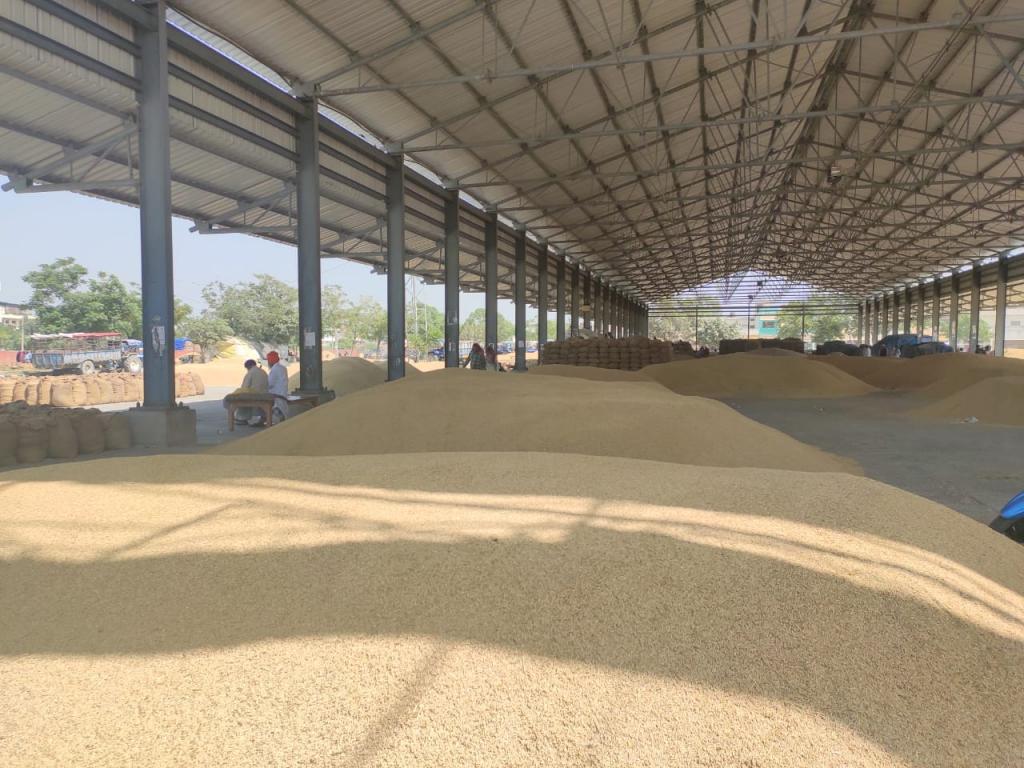 The weight of their crop has also shrunk, the farmers rued.

“I must have lost five quintals in these few days. The government says farmers can sell their crop anywhere as per the new laws. When nobody is buying from the mandi, who is going to buy outside of it?” asked Singh.

The state increased the permissible limit of moisture content for paddy procurement to 19 per cent after protests by farmers, on September 30. The Bhartiya Kisan Union (BKU), however, has demanded that it be increased to 22 per cent.

The produce that the government agreed to buy, too, faced a myriad of logistical problems: The government has been having a hard time arranging transport, labourers and gunny bags.

During one such procurement process at the New Anaj Mandi in Kaithal district, 64-year-old Palla Ram’s 300-quintal crop got listed during a visit by district authorities and Haryana State Warehouring Corp. But he received no information on when it would be lifted.

“When will they arrange for the transport, when they will lift it? These logistical issues should not trouble the farmer. Till last year’s marketing season, all these things were taken care of by the Arthiyas along with the rice miller. I don’t trust the government. I am not going to let them lift my crop unless they hand me my money,” he said.

The Arthiyas have been protesting at different mandis. At a mandi in Kaithal, they raised their concerns with Sub-Divisional Magistrate Sanjay Kumar, but claimed they didn’t get a satisfactory response. Following this, the Arthiya association asked all agents to not accompany the farmers during the crop-checking process by the government or at the lifting stage.

“This is in line with its new laws on agriculture. The government is not thinking about us,” he said.

But the farmers want the Arthiyas to be involved. “My work at the mandi won’t happen without my Arthiya. He helped me get my 70-quintal crop inside the mandi when the digital portal by government allowed only 25 quintals,” said Jaswant Singh from Kaithal’s Lander Keema village.

The online system under ‘Meri Fasal Mera Byora’ (My Harvest My Details) scheme, which seeks registration of farmers and issues them e-gate passes to mandis, has also hassled farmers.

Farmers claimed that the portal allows lower yield for sale than what they grow. The Haryana CM September 26, however, directed officials to ensure that if a farmer brought 10 per cent additional paddy to the mandi than the prescribed quota, it should be purchased. The limit, which was earlier 25 quintals per acre, has now been increased to 33 quintals.

The portal also doesn’t allow farmers the flexibility of time to bring the produce to the mandi, they claimed.

“What if I can’t bring my crop during the stated period? What if my crop is not ready or if it’s raining or if I have some other work? The portal worked fine during wheat procurement in the last marketing season, because wheat doesn’t get damaged easily. But paddy requires immediate sale,” said Bacchitar Singh, a farmer from Kacchwa village.

The state rice millers’ association has claimed they would strike till their demands about quantity of rice and lifting of paddy are met.

“We get 62-64 kg of rice out of 100 kg. We are also supporting the Arthiyas’ demands of the millers lifting the crop from the mandis instead of the government. Till these are met, we won’t allow the government to drop the lifted crop in our mills,” said Rajinder Raheja, a member of Rice Millers Association, Karnal.