Ban lifted on fishing in Sutlej

Discharge of effluents into the river had caused large-scale fish deaths, leading to the curbs 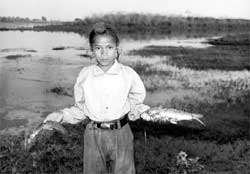 in view of the economic hardship faced by the fishing community in Ropar district and the fresh inflow of water, a division bench of the Punjab and Haryana High Court recently passed an interim order lifting the ban on fishing in Sutlej river. Fishing activity along the 90-kilometre stretch of the river that falls in the district had been halted after large-scale fish deaths on November 17, 2001.

The ban was imposed as the river water had turned toxic due to excessive release of untreated effluents from a nearby industry. While issuing the interim order on January 1, 2002, the court directed the Punjab Pollution Control Board (pccb) to collect samples regularly for two weeks and submit a report. The principal secretary, department of environment, was also told to file an affidavit within two weeks.

According to N S Tiwana, executive director in the department of science, technology and environment, the High Court (hc) wants to know the reasons behind the failure of the authorities to prevent the discharge of untreated effluents into the river. The environment department has been asked to specify in the affidavit whether any area of the district received water supply from the river. The court has instructed the district administration to be more vigilant in the future. The next hearing has been fixed for January 30, 2002.

Welcoming the hc's interim order, fish contractor Ram Prasad Jaswal said that the local fisherfolk had suffered a serious economic setback due to the one-and-a-half-month-long ban in Ropar. "The authorities should mete out exemplary punishment to those responsible for the fish deaths so that such incidents do not recur," said Jaswal. He is hoping that the compensation amount, which he has claimed against his loss for the pollution of his lease area in Sutlej river, would be determined in the subsequent hearing.

It is alleged that the mass fish deaths occurred due to toxic effluents discharged from the production plant of National Fertilisers Limited (nfl), located alongside the Sutlej. Though the local residents charge nfl with polluting the river, the company has denied its involvement in the matter. However, additional deputy commissioner Krishan Kumar's field report submitted in the court has recorded the statement of the villagers against nfl.

Though another industry -- Punjab Alkalis and Chemicals Limited (pacl) -- is located in the same area, the official's report specifies that the pacl discharge point is 600 metres downstream of that of nfl. It has been observed that even as pacl contributes equally in polluting the river, yet the recent fish deaths occurred upstream of its discharge point. The nfl authorities refused to comment on the issue.

Fish deaths have occurred earlier too in the Sutlej, but the November 17 incident received extensive media coverage. The hc treated the media reports as a petition in the public interest, directing the state and all its functionaries on November 29 to take immediate steps for imposing a ban on fishing in Ropar. The court also directed the district administration to inspect the site and submit a status report. "Whenever the pccb will pinpoint any industry for causing pollution, we will promptly take legal action against them," said G S Grewal, deputy commissioner, Ropar. Ajay Kumar Mahajan, chairperson, pccb, said he had nothing to say as the issue is currently sub-judice.

The extent of pollution this time was massive. On November 24, the local office of the state fishery department took some samples of the river water. They have since been handed over to M S Johal of Punjab University for examination. Even though the water was collected a week after the incident, Johal found that its pH factor was around 9.4 (the normal level is between 6.4-7.4). The oxygen level of the tested water was 3.8 milligrammes per litre (m/l) as against the normal range of 8-10 m/l. The dissolved total solid was found to be around 900 m/l, whereas the desired limit is 150 m/l. The situation must have been far worse on November 17 and in its immediate aftermath.

"The water sample I received was a week old. Moreover, the autopsy could not be done because the fish were nearly decomposed," said Johal. "We collected samples of the water and dead fish as soon as we were intimated about the incident," clarifies Manjit Singh, the local chief fishery officer at Nangal.

The volume and toxicity of the discharged effluents can be gauged from the fact that even though Kumar visited the site 12 days after the episode, he could see plenty of dead fish a kilometre downstream of Bela Dhiani, a village in the area.