But where's the data? 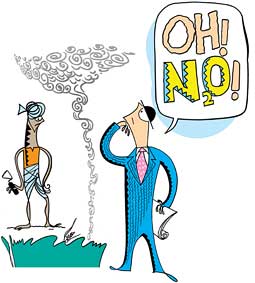 if emissions of reactive nitrogen gases (oxides of nitrogen and ammonia, but especially nitrous oxide) ever get hitched to the international debate on global warming, in the form of a 'who contributes how much?' blame-game between North and South, then Indian scientists want to pre-empt such pressure. This is an avowed purpose 10 papers published in the June 10, 2008 issue of Current Science share. The result of a two-year study on reactive nitrogen production from various sources in India by the Indian Nitrogen Group, the papers also show scientists have much to be worried about.

Scientific concern over global warming caused by nitrous oxide saw concrete action when, in 2003, the International Nitrogen Initiative (ini) was formed. The Scientific Committee on Problems of the Environment, International Geosphere-Biosphere Programme and the Dutch Ministry for Housing, Spacial Planning and Environment sponsored the scientists under the initiative to find ways to curb the accelerated production of reactive nitrogen due to human activities. In 2006, taking a cue from ini, the Society for Conservation of Nature, a Delhi-based ngo, formed the Indian Nitrogen Group.

Nitrous oxide is the only oxide of nitrogen that directly contributes to global warming (its share: 6 to 8 per cent). A trace gas as compared to carbon dioxide and methane, its global warming potential per unit is 296 times that of carbon dioxide. In this context, India currently sits quite pretty. Agriculture here contributes to a mere 0.88 per cent of the world's nitrous oxide emissions; India is responsible for only about 0.1 per cent of the global warming such emissions cause.

But globally, "though there is yet no evidence of increase in contribution to global warming, the rate of emission of nitrous oxide (compared to carbon dioxide) is definitely increasing," says Himanshu Pathak, a scientist at the International Rice Research Institute-India. "There is no pressure (from the West) yet, but it may come as India is increasing n -fertilizer use."


The overview contains this tone of concern: "As would be evident, our understanding of the nitrogen cycle in India is at best a tentative one." Moreover, write C Sharma and his team from the National Physical Laboratory, Delhi, in their paper on estimates of emission and deposition of reactive nitrogenous species, data on oxides of nitrogen in general and nitrous oxide in particular "are still scarce and suffer from lack of adequate monitoring stations and data quality." Crucially, "we still do not have proper India-specific emission factors for nitrous oxide as we have for methane and carbon dioxide. More sites and ecologies in India need to be studied to properly determine the India-specific and state-specific emission factors."

Why is this need important? The emission factor of a gas is the amount of that gas emitted per unit source per year. It helps accurately calculate the total emission of a particular gas from a country per year, and so is a calculation that also possesses political valence, as the methane controversy shows (see box: CO2? No, CH4). "We should not be caught unawares because of lack of data," Sharma says. "On the other hand we should also know how much of nitrous oxide we really emit and whether we need to cut down on that."


Agriculture accounts for more than 80 per cent of total nitrous oxide emissions in India. This includes a whopping 60 per cent from use of nitrogenous fertilizers, informs a study by the Punjab Agricultural University (pau), Ludhiana. The problem is only 30 to 40 per cent of nitrogenous fertilizers applied to the soil are absorbed; 60 to 70 per cent remain unused. The fact is, says the pau paper Reactive Nitrogen in Indian Agriculture, during the last half-decade, while n -fertilizer consumption in India has been touching new heights, the production of both rice and wheat has reached a plateau. At the same time, the article notes, n -fertilizer efficiency has been decreasing.

Bijay Singh, pau agricultural scientist, believes that these are symptoms of pure bad practice. "Most of the nitrogenous fertilizers are applied at the beginning of the crop. The plants cannot take up so much of fertilizer at one go and hence these either trickle down and pollute the ground water or emit nitrous oxide." N Raghuram of Indraprastha University, Delhi, points to another dimension: "There is no research at present to improve the nitrogen fertilizer formulations to make them more efficient". This is mainly, he adds, because of the focus of research to increase yields. "In one of my visits to the research institutes, I enquired about screening of plants on the basis of nitrogen use efficiency. They said they screened the plants on the basis of yield given by the plants on use of the same amount of nitrogen fertilizers." He also attributes the low nitrogen-use efficiency in Indian agriculture to the urea-centric attitude of Indian agricultural organisations and policy makers.

To control, even reduce, reactive nitrogen emissions, farming practices must improve. Singh suggests the use of indicator technologies like leaf colour charts, chlorophyll meters and optical sensors; these estimate how much nitrogen crops need and can help in management strategies. But, adds Raghuram, "Unless agriculture extension can reach such technologies to the farmers, they will be of no use". So, "apart from gearing up agricultural research towards improving efficiency of fertilizer utilisation, we need to improve our agriculture extension".