Farmland and lakes to be used for the Sriperumbudur project 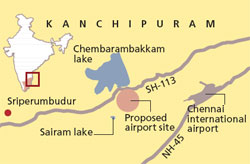 OPPOSITION to the Tamil Nadu government's plan to construct a greenfield airport at Sriperumbudur near Chennai is growing.

On August 12, around 3,000 people from 26 villages were lathicharged when they staged a demonstration against the project. The reason: the airport plan requires about 1,821 hectares and protestors say most of it will be agricultural land and several small lakes.

According to the government, the current Chennai airport at Meenambakkam has reached its saturation point, traffic-wise. But A Ranga nathan, a retired pilot who works on aviation safety, contested the claim. Madhumita Dutta of Corporate Accou ntability Desk, an advocacy group in Chennai, suspects the new airport is being planned as a boost for the growing industrial area around Sriperumbudur. The International Civil Aviation Organisation, a UN agency, recommends a distance of 241 km between two international airports. "This criterion won't be met," said Ranganathan.

"If Sriperumbudur comes up, Meenambakkam will have to be closed as there will be four airports in a 24-km radius," he said. The two airforce bases at Tambaram and Arakonam are restricted airspaces, so corridor for take-off and landing of civil aircraft would be narrow, he said.