Climate Emergency CoP 25: India is the only major economy to be ‘2 degree compatible’

The US, China and the EU are ‘highly insufficient’ in their efforts to reduce GHG emissions 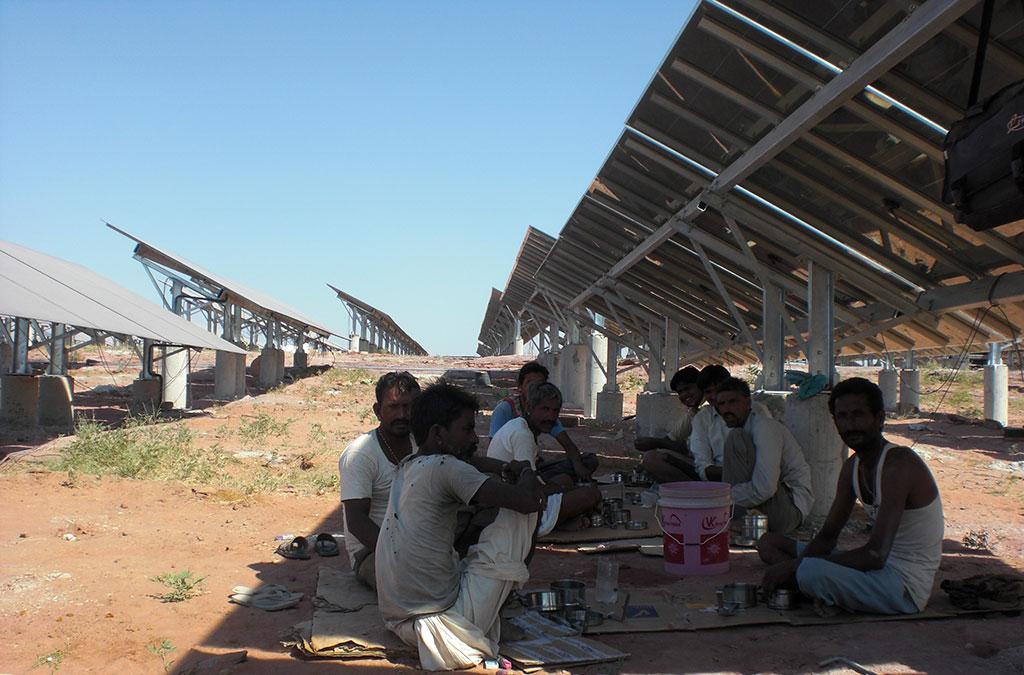 China, India, the EU and the US accounted for almost 60 per cent of carbon dioxide (CO2) emissions from fossil fuel combustion in 2017. The world will be on track to meet its targets under the Paris Agreement only if these countries / group of countries meet their respective targets.

But it is not the case as the lack of progress on overall mitigation is matched by lack of progress in delivering on equity. Per capita emissions continue to be allocated highly unequally — in 2017, per capita emissions in the US were nearly nine times as high as India's. Let’s look at how each of these countries is performing on their respective targets as per their Nationally Determined Contributions (NDCs). 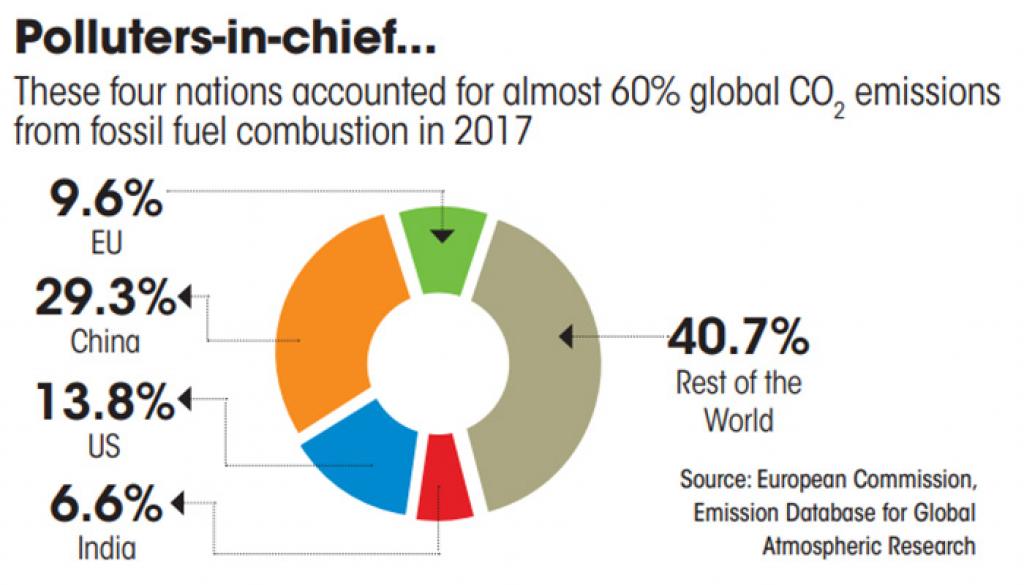 India’s headline pledge under its NDC is to reduce the emission intensity of its GDP (greenhouse gas, or GHG, emissions per unit GDP) by 33-35 per cent over 2005 levels by 2030, and the 2019 Emissions Gap Report notes that the country is on track to exceed it by 15 per cent.

In addition, India has committed to generate 40 per cent of its installed power capacity from non-fossil sources by 2030, with an interim target of 175 GW of non-hydro renewables by 2022. While India is on track to meet the 2030 target, it may fall short of the interim target by as much as 42 per cent, warns a 2019 report by CRISIL, a Mumbai-based global analytics firm.

Going beyond the emphasis on targets, Sujatha Byravan, a Chennai-based scientist, argues that instead of deepening democracy through community-level generation, renewable projects are being awarded to big players, and an opportunity to transform the power sector was being lost.

India has also pledged an additional carbon sink equivalent to 2.5-3 billion tonnes of CO2 by 2030 through forest and tree cover. But the Union government’s Green India Mission, which seeks to achieve the same, has been regularly missing its annual targets, and rendering the fulfilment of the pledge unlikely.

Overall, the Climate Action Tracker has rated the country’s efforts as ‘2 degree compatible’, which means that if all countries made efforts like India’s, the average global temperature rise could be limited to 2°C by 2100. India is the world's only major economy to be rated so.

China’s headline NDC pledge is for its emissions to reach a ‘peak’ before 2030, and consistently fall thereafter. Its additional pledges include lowering the CO2 emission intensity of its economy (CO2 emissions per unit GDP) by 60-65 per cent over 2005 levels by 2030, increasing the share of non-fossil fuels in primary energy consumption to 20 per cent, and increasing its forest stock by 4.5 billion cubic metres over 2005 levels by 2030.

Most studies estimate that China’s emissions will peak before 2030, but as the 2018 Emissions Gap Report notes, there is yet some uncertainty on the country meeting its targets. Kelly Sims Gallagher, director of the Climate Policy Lab at Tufts University in the US, tells Down To Earth that the non-fossil target would be a challenge requiring the completion of power sector reforms and a tightening of its emission trading scheme. 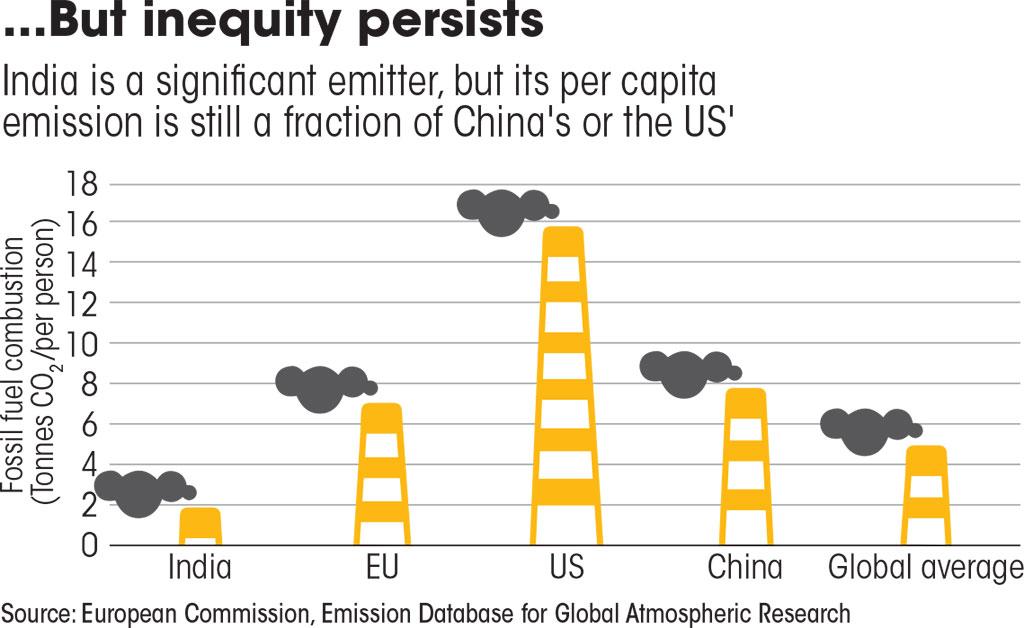 The EU’s climate efforts have been rated ‘Insufficient’ by the tracker — one that will lead to a warming of 2-3°C by 2100. Its NDC pledge was a 40 per cent reduction in emissions over 1990 levels by 2030. It will meet this target, says the 2019 Emissions Gap Report.

However, some additional efforts, like a faster phase out of coal, could reduce emissions by as much as 58 per cent, states Halfway There, a report by Sandbag, a London-based think tank. It argues a 50 per cent reduction should now be considered business-as-usual and the ambition be set higher.

Suzana Carp, Sandbag’s Brussels representative, tells Down To Earth that any promise of reducing emissions by less than 55 per cent would be incompatible with the Agreement and also risk the whole process losing credibility. Sebastian Mang, a Greenpeace EU climate policy adviser, is hopeful of such an increase in EU's ambition, expressing faith in the European Commission's promise of a ‘transformative green deal’ next year.

Carp also highlights the problematic roles of Germany and Poland. The former is on track to miss its 2020 target and is blocking discussions on the 55 per cent target, while the latter is blocking the 2050 net zero legislation (see ‘2050’ on p36). She says that Germany should not let its “internal politics” deter EU-wide ambition enhancement.

The US’ emission mitigation efforts are ‘Critically Insufficient’, according to the Climate Action Tracker. If the world stoops to the US' level, the temperature rise by 2100 would be in excess of 4°C. The US has withdrawn from the Agreement, but it did not adhere to it even when it was a party.

Against its pledge of reducing emissions by 26-28 per cent over 2005 levels by 2025, the US could only reduce them by 12 per cent by 2017, making achievement of its Paris goals highly unlikely. Though its emissions have fallen since 2005, they are still higher compared to 1990 — the Kyoto baseline year, which most developed countries measure their emissions by.

Recent data gives even more cause for concern as it indicates that even this trend of slow decline may have reversed. Energy-related CO2 emissions actually rose in 2018, at a rate which the Rhodium Group, a New York-based advisory firm, estimates was its second highest in two decades.

The country, however, is not entirely out of the fight. Since states, cities and businesses accounting for nearly 70 per cent of the US’ GDP have committed to continued climate action despite the federal pullout from the Agreement, greater US climate ambition is likely after the 2020 elections, says Nathan Hultman, director of the Centre for Global Sustainability at the University of Maryland in the US.

The world is, thus, clearly not on track to meet its Paris goal primarily due to the low level of ambition represented by most NDCs. The way forward requires ambition enhancement, particularly in developed countries/groupings such as the EU, together with greater support for developing countries to mitigate their emissions. The 2018 Emissions Gap Report also emphasised fiscal reform, innovation and markets, and the role of sub-national actors. Hultman emphasises the latter.

“Leaders at all levels of government, and in businesses, are stepping up to build the politics and implement changes... National elections of course remain essential, as does the international process embedded in Paris [Agreement]. But building climate across all levels of society will be a fundamental part of our solution,” he says. With the US having exited the Paris Agreement, but most of its states declaring support for it, Hultman’s theory on the importance of sub-national actors sounds spot on.