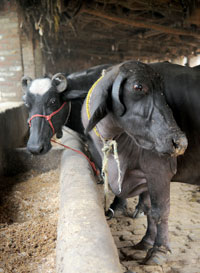 COWS are well-entrenched in the global climate change debate. Cud-chewing animals release methane, a greenhouse gas, when the fibrous matter breaks down and undergoes fermentation in their stomach. Though methane emissions are lower than CO2 ones, they are much more harmful—a kg of the gas has 21 times the effect of a kg of CO2. Since dependence on livestock in poor countries is high, emissions from animal farming has been a convenient stick for developed countries to beat developing nations with.

A study by Indian scientists, however, has estimated that methane emissions in the country from ruminants is lower than estimated. The study has pegged these emissions through enteric fermentation at 9.10 million tonnes per year (based on livestock data of 2003) which is lower than the previous estimate of 10.65 million tonnes, arrived at in 2009 by the Space Application Research Centre in Ahmedabad.

For this study, researchers used 400 different observations to account for different regions and types of animal feed, instead of just using conversion factors developed by the Intergovernmental Panel on Climate Change that do not take into account region-specific differences. In the northern regions, the feed taken into consideration was wheat and sorghum-based, while in the south it was coconut-based (higher the fibre more will be the methane emission). “We have tried to reduce and minimise uncertainty to the extent possible,” says lead author Sultan Singh from Indian Grassland and Fodder Institute in Jhansi. The study was published in the April 10, 2012, issue of Current Science.

But there is still scope for improving estimates, says A K Singh of the natural management division of the Indian Council of Agricultural Research. “These estimates are still coarse as the sheer magnitude of difference in the number of species, breeds and feed is hard to capture,” he says.

The researchers add methane emisions can be reduced by improving animal shelters and giving diet supplements like molasses. This latest estimate has been included in the Indian government’s national communications to the UN inventory on climate change emissions released recently.