Although claiming otherwise, Bush's new plan leaves enough room for the US to raise its emission of greenhouse gases 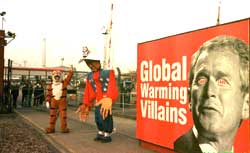 Dubbed as the country's alternative to the Kyoto Protocol -- a treaty to cut industrialised countries' greenhouse gas (ghg) emissions -- the new us climate change policy is far removed from its objective. The policy, announced by President George W Bush at National Oceanic and Atmospheric Administration on February 14, 2002, will actually cause emissions to increase by about 30 per cent over 1990 levels in 2010. Under the Kyoto pact, which the us rejected in 2001, it had to bring down its emissions to seven per cent below 1990 emission levels.

Instead of capping total ghg emissions, the policy calls for a cut in ghg intensity by 17.5 per cent over the next 10 years. ghg intensity is a measure of ghg emissions per unit of economic output, usually expressed in terms of gross domestic product (gdp). Between 1990 and 2000, though ghg intensity fell by about 17 per cent, the emissions increased by 14.7 per cent. Bush has called for a similar cut in the intensity for the period 2002-2012. With the gdp increase projected to be almost the same as in the 1990s, the emissions will increase by about 14 per cent even as ghg intensity declines by 17.5 per cent. In effect, Bush's proposal will allow emissions to continue increasing at the present rate.

Among other measures, power plant emissions of sulphur dioxide, nitrogen oxides and mercury will be cut by about 70 per cent. However, no such reductions are proposed for carbon dioxide, one of the main ghgs. Bush also reiterated his demand for corresponding cuts by major developing countries such as India and China saying, "It would be irresponsible to absolve them from shouldering some of the shared obligations." The developing nations, however, contend that industrialised countries have contributed most to the problem and should take the first step.

While announcing the policy, Bush said that the us will not interfere with other countries' plan to ratify the protocol, but it is hardly expected that this policy will not influence other countries' position. Already, Canada is backtracking on its earlier decision to ratify the protocol by June 2002. With this policy, the ratification of the Kyoto protocol before the World Summit on Sustainable Development in September 2002 seems more unlikely than ever.