Telangana’s heavy showers have sure shot imprint of climate change 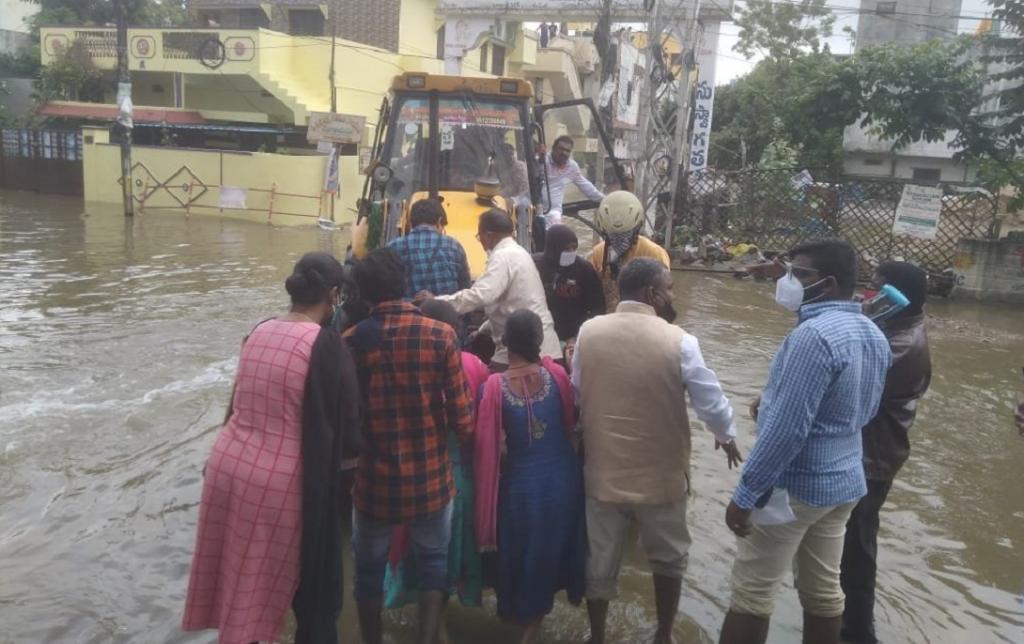 The unusually excessive rainfall that Telangana has received since October 13, 2020 may have been due to global warming.

The main cause of the rainfall is a deep depression which de-intensified into a depression and currently lies over north interior Karnataka and some nearby areas of Maharashtra and Telangana, according to the India Meteorological Department (IMD).

IMD predicts that the intensity of the system will further decrease to a low pressure area by the evening of October 14. A deep depression is a cyclonic circulation that carries a lot of rainfall and has moderate wind speeds just less than a cyclone.

The current system had formed as a low pressure area in the Andaman Sea. It then intensified into a depression and a deep depression, all the while moving in a north-north westward direction.

It finally took a westward turn towards the Andhra Pradesh coast and crossed over in the early morning hours of October 13, with wind speeds of 55-65 kilometres per hour (kmph), gusting to 75 kmph.

When such systems intensify into cyclones and make landfall along coasts, they de-intensify much quickly, which means that interior regions do not get much affected.

But global warming is making cyclonic systems all over the planet which includes hurricanes and typhoons much more dangerous as they carry more rainfall than before.

This is mainly because warmer air can carry more moisture than colder air. More moisture translates to more rainfall in cyclonic systems. The increase in rainfall can be calculated with the Clausius-Clapeyron equation which says that for every one degrees celsius (°C) rise in temperature the atmosphere can hold seven per cent more moisture.

With global warming projections of up to 5°C by the Intergovernmental Panel on Climate Change (IPCC), this could translate to an increase of 35 per cent in moisture content of atmospheric systems by the end of the century.

What makes the situation scarier in the case of cyclonic systems is that the increase in moisture content of cyclones does not simply follow the Clausius-Clapeyron equation, creating possibilities for many more deluges in different parts of the world that are affected by cyclonic systems, according to a research paper published in the journal Earth’s Future in May 2018.

This is because “the convergence of moisture into a storm not only leads to higher precipitation but also, for certain storms, greater intensity and growth”, writes Kevin Trenberth, lead author of the paper and climate scientist at the National Centre for Atmospheric Research in the United States.

So, both warmer air and water affect the cyclones making the interactions much more complicated. The unprecedented intensity of the rainfall in Telangana is perhaps an evidence of this impact of global warming on cyclonic systems.

That is a trend that is only going to increase in the future if anthropogenic greenhouse gas emissions are not brought under control, according to the IPCC.

Telangana received a weighted average of 25.2 millimetres (mm) of rain October 13, 18 times the normal rainfall it receives at this time of the year, according to data from IMD. The rainfall had been going on for the past three days with some breaks.

Many parts of capital Hyderabad have flooded due to the rainfall. Many observers have claimed that they have never witnessed such rainfall in their lifetimes.

Fifteen people have lost their lives in rain-related incidents in the city in the last two days, according to media reports. The city, as a whole, received 37.3 mm absolute rainfall October 13, which is 18 times the normal for this time of the year.

Many places inside the Greater Hyderabad Municipal Corporation (GHMC) limits such as Singapur township received 320 mm of rainfall October 13. Hayathnagar also received 290 mm of rainfall during the day.

This is only the second time that such high rainfall has been recorded in the GHMC areas according to IMD.

Other places in the main parts of the city such as Osmania University and Begumpet also received high rainfall, recording 250 mm and 210 mm rainfall respectively. Eleven other stations in the state have received rains in excess of 200 mm October 13.

If one looks at the individual districts of Telangana, the situation becomes scarier as many of them are arid and do not receive such intense rainfall even during the monsoon season.

All districts, 33 in total, except one, have received large excess rainfall October 13, with excesses ranging from 297 per cent in Kumaram Bheem to 5,242 per cent in Malkajgiri. Only Jogulamba Gadwal district had a deficit rainfall of four per cent.