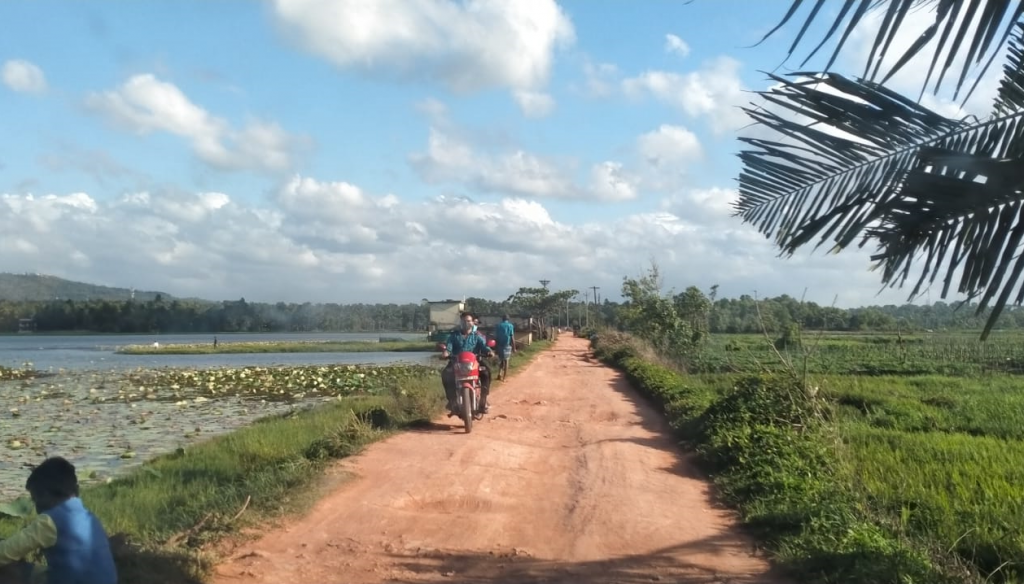 Southwest Monsoon has brought scanty rains in north Kerala so far, leading to water scarcity in several parts of the state. Farmers have been on the receiving end.

“The heat this time is scorching. Pepper plants are wilting,” said Echome Gopi, a small-scale farmer in Wayanad. He hails from agrarian village Echome near Kalpetta.

Gopi would produce three quintals dried pepper every year till 2014 on his one-acre farm: “I invested Rs 1 lakh in pepper plantation this year despite the novel coronavirus disease (COVID-19) pandemic and subsequent lockdown. But now I feel that all my money has gone down the drain.”

The east-flowing Kabini river has almost dried up in Pulpally and Mullankolli panchayats in Wayanad. Kabini is one of the main feeders of South India’s Cauvery.

The shortage of water has spelt hardship for paddy farmers in Tamil Nadu’s delta districts comprising Thanjavur, Tiruchirappalli and Nagapattinam districts as well.

Almost every part of central Kerala witnessed moderate rainfall in the last week of July. In Kuttanad taluk, the backwater region of Alappuzha, families spent Rs 2,400 on an average each month on potable water supplied by private individuals on boats.

The residents there are dependent on the contaminated water available in the surrounding backwater region for all other domestic needs.

Kerala’s tribal heartland, Attappady in Palakkad district, is facing a scarcity of drinking water. Wells and ponds have dried up in the area, where groundwater is already getting depleted at an alarming rate.

In Eruthempathy, Vadakarapathy and Kozhinjampara panchayats in Palakkad, residents have to wait for the water-carrying trucks thrice a week.

The meteorological department and experts said the state would get moderate rains by August-end and early September. But the failed monsoon has already created widespread anxiety. Rivers across the state are fast drying up while dams remain empty.

Nearly 70 per cent of the local bodies in Kerala are using water tankers to meet the drinking water needs of residents. Hydroelectricity production is now minimal, and to meet the gap, the state is now purchasing power from outside at a higher tariff rate.

The water shortage has crippled farmers’ agricultural activities. The state weather department recently announced that all southern states received excess rain in July, except Kerala. The state faced a shortage of 20 per cent, according to the department.

Experts said the southwest monsoon will continue to remain weak till September.

The overall deficiency in the state from June 1 till date is 29 per cent. It was more than 39 per cent in the June-July period in Alappuzha, Kannur, Kasaragod, Kollam, Malappuram, Palakkad, Thiruvananthapuram, Thrissur and Wayanad.

According to the School of Climate Change and Environmental Science at Kerala Agricultural University, southwest monsoon 2021 registered a healthy average rainfall in the first half of the season everywhere except Kerala, Gujarat and the North East India.

”Normally, Kerala and the North East get excess rains during the southwest monsoon. So they can somehow survive a 10-15 per cent deficiency.  But a shortfall of more than 20 per cent is a cause of concern,” said CS Gopakumar, a college professor.

Kerala usually witnesses heavy rainfall in July, usually 72 cm on average in that month and 64  cm in June. It records 43 cm in August and 26 cm in September.

August 2020 was also not different, and the state received 57.5 cm rain against the average of 43 cm. Floods and landslides, however, affected Idukki district only.

According to the extended forecast issued by the Indian Meteorological Department, only below-average rainfall could be expected in Kerala in August. However, some northern Kerala areas can expect some isolated heavy rainfall in the second half of August.

According to the Malayalam calendar, August marks the arrival of Chingam, the month in which the state celebrates its harvest festival Onam. A pleasant Chingam means a celebration of the 10-day festival.

The global factors influencing the southwest monsoon are not conducive to heavy rains like the state had witnessed in 2018, said K Santhosh, director, IMD Meteorological Centre in  Thiruvananthapuram.

According to him, the current weather is mainly influenced by a system of oscillating sea surface temperatures known as the Indian Ocean Dipole (IOD). It now prevails negatively over the Indian Ocean, and the scenario is likely to continue till the end of the monsoon season.

The Lakshadweep Islands and Mahe also recorded a deficient monsoon.

Climate experts said the monsoon this year had set in over Kerala on June 3, much like in the previous years. However, the onset was negligible and had a bearing on the actual performance of the southwest monsoon season, which lasted until September last year.

The met centre officials clarified several past instances wherein a delayed or an early onset ended up resulting in a deficient monsoon.

This year, Kerala recorded a ‘large excess’ (more than 60 per cent over the normal) winter rainfall (in January and February) and summer rainfall (March, April, May).

“Kerala has been witnessing monsoon breaks and heavy rainfall for a few days after a short dry spell for a few years.  Some freak systems may form in the Bay of Bengal, which may bring good rains,” said S Abhilash of Advanced Centre for Atmospheric Radar Research at Cochin University of Science and Technology.

According to him, climate change has made Kerala’s rain availability unpredictable, and the state has to equip its farmers with the capabilities to engage in climate resilient farming practices.