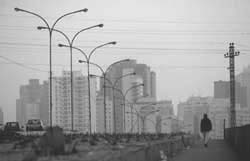 The Brazilian government has introduced an electricity rationing system to overcome the prevailing energy crisis. The citizens have been directed to cut down their electricity usage by 20 per cent. The households which are unable to meet the rationing targets will not get power supply for up to six days. On the other hand, those who cut down their electricity consumption by more than the set target will get cash prizes. Companies that cut consumption by more than the given limit will be allowed to sell their extra savings to others. The rationing system has triggered off a mad rush for energy-efficient alternatives for electricity. "The demand for fluorescent lighting has shot up by 1,000 per cent," claimed Eulalia Cardoso, a salesperson at a hardware store.