The demand for electricity in India has seen a surge since the lockdown to curb the novel coronavirus disease (COVID-19) pandemic outbreak was lifted three months ago.

Power generation for August 2020, however, was 13 per cent lower on year-on-year basis. About one-third came from non-fossil fuel based energy sources.

Happy to share that in August the share of electricity from non-fossil fuel was 34%. @MinOfPower @teriin #energytransition

Electricity generation in India follows a seasonal pattern. The share of electricity sourced from non-fossil-fuels — including renewable energy, hydro energy and nuclear energy — usually peaks during the summer season, especially the monsoon months.

India’s electricity generation in the past year

The share of fossil-fuel-based sources dips during the summer months and hovers below 70 per cent. Electricity demand surges in summers which is met by increased generation from hydro-electric plants and supported by renewable energy.

In case of a drop in power demand, the generation from fossil-fuel based plants is restricted, as they have the largest share. Renewables enjoy a ‘must-run’ status in the country, which is also a reason for soaring RE share in the total generation during the last few months.

To ensure an uninterrupted operation of renewables during last few months, the Union government took a host of actions, including the Union Ministry of New and Renewable Energy’s (MNRE) instruction to discoms for clearing bills of RE generators. 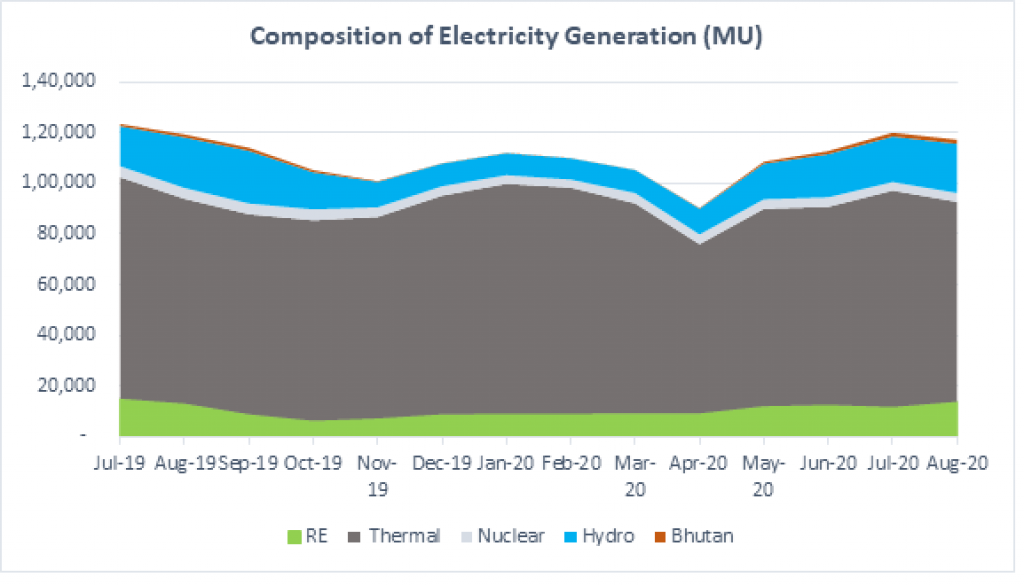 The figure above shows the changing electricity supply characteristics from July 2019 to August 2020 on a monthly basis.  For August 2020, the share of non-fossil fuel electricity was about 33 per cent, a notch higher than 32 per cent of August 2019. This can be attributed to the reduced overall generation due to COVID-19 slowdown.