Sugarcane fields not for Shell 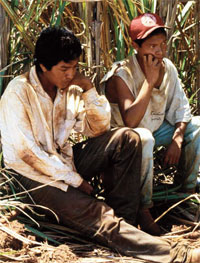 The Guarani tribe in Brazil has demanded that Royal Dutch Shell stop using its land to produce ethanol.

In a letter to the oil biggie, Guarani leaders wrote, “Since the factory began to operate all our health has deteriorated—children, adults and animals. Shell must leave our land...We want our land to be mapped out and protected for us.” The letter, which accused Shell of using the Guarani land without permission, noted all their medicinal plants have “died because of the poison”.

Shell and Brazilian ethanol maker Cosa are working to produce biofuel from the sugarcane grown on Guarani land. Brazil is the world’s top producer and exporter of sugarcane-based ethanol. Much of its vehicles run on the biofuel.