British environment minister John Gummer is smarting from being called a shitbag by his Norwegian counterpart. 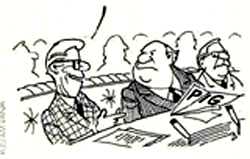 AFTER being called "a little squit" and "an inconsequential little creep", British environment minister John Gummer now has a new insult to add to his list of 'Names the World Called Me'. At an election rally in Norway, Norwegian environment minister Thorbjoern Berntsen, angry because Gummer was "insolent to Norway" during a discussion on acid rain, called him the biggest drittsekk (shitbag) he'd ever met.

While the magnitude of the insult can be assessed only if Berntsen were to reveal the number of shitbags he knows, insults have become a way of life with Gummer, who has even been portrayed as a pustule by Guardian cartoonist Steve Bell. He is nevertheless apprehensive about being known in future as John Shitbag Gummer. Already, a Guardian reader has written in asking, "Why are Norwegian politicians more perceptive than ours?"

While Gummer attributes the insult to his opposition of Norway's resumption of whaling, Berntsen said the word he used was no more than an average insult in the British parliament, and he definitely has a point there. The House of Commons has heard such masterpieces as Clement Attlee calling Winston Churchill: "Fifty per cent genius, fifty per cent bloody fool", and Tony Banks saying of Terry Dicks: "The honourable gentleman is undoubtedly living proof that a pig's bladder on a stick can be elected as a member of parliament."

Norwegian Prime Minister Gro Harlem Brundtland ably backed her minister and pronounced, "To dismiss and ridicule the problems of acid rain when a Norwegian environment minister brings them up with a British environment minister is not acceptable." However, Berntsen later admitted his choice of words had not been ideal, but stopped short of an apology.