Brazil’s environment minister Ricardo Salles — in a video — called on the government to push through further environmental deregulation while the country’s people grappled by the novel coronavirus disease (COVID-19) pandemic.

The statement was made during a ministerial meeting released by the Supreme Court on May 22, 2020.

“We need to make an effort while we are in this calm moment in terms of press coverage — because they are only talking about COVID-19 — and push through and change all the rules and simplify norms,” he said in the video.

The government had the “opportunity” to pass “infra-legal reforms”, while the press gave “a little relief on other issues”, the minister said, referring to press coverage on the pandemic.

It will be difficult to get the support of the National Congress to approve the changes at this time, but many reforms will not need the approval of parliamentarians, according to Salles.

“We don’t need Congress. Because things that need Congress, with the mess that is there, we are not going to get it passed,” he said.

The minister's statements generated outrage among environmental organisations that expressed disapproval for the dismantling of the country's environmental protection conditions.

Non-profit Greenpeace Brasil said Salles used the death of the disease outbreak’s victims to pass “this policy of destruction”.

“Salles believes that people dying in line at hospitals is a good opportunity to move forward in his anti-environment project,” said Greenpeace Brasil spokeswoman Luiza Lima.

“He believes that the absence of the media spotlight, properly aimed at the pandemic, would be enough to do what he wants,” she added.

The video had demonstrations of breach of decorum, a contempt for institutions, administrative infractions and countless prejudices, said the country’s former environment minister Marina Silva.

“We hope that the Federal Public Ministry, Supreme Court and Congress will take immediate measures to remove Ricardo Salles. By plotting intentionally against his post, he demonstrates acting with a deviation of purpose,” she said. 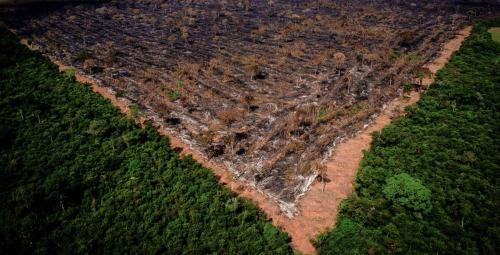 Deforestation increased by 55 per cent in Brazil in the first four months of this year Photo: IBAMA

The increase in deforestation coincides with the increase of COVID-19 cases in Brazil. Deforestation increased by 55 per cent in the first four months of this year, according to data from Brazil’s National Institute for Space Research, a research unit of Brazil’s Science, Technology and Innovation Ministry.

Brazil is the second-most affected country in the world by the COVID-19 pandemic, with more than 360,000 positive cases and 24,000 deaths so far.

South America has become “a new epicentre” of the pandemic in the world, with Brazil being the most affected in the region, according to the World Health Organization.