Environmental lawyer killed in the Philippines 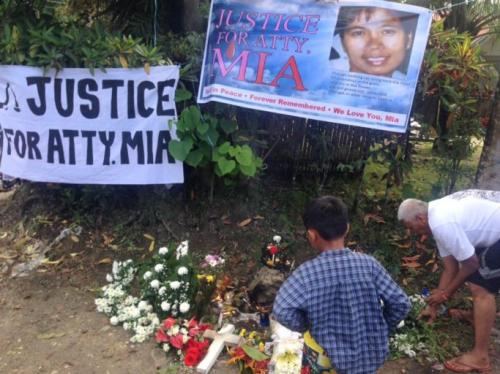 Environment and human rights advocates in the Philippines gathered Tuesday to honor their colleague Mia Mascariñas-Green, who was shot dead Feb. 15.

Mascariñas-Green, a lawyer for the NGO Environmental Legal Assistance Center (ELAC) who also worked on civil and criminal cases, was ambushed while driving her three young children in Tagbilaran City, on Bohol Island in the Central Visayas region.

“We condemn the unspeakable cruelty and act of sheer cowardice by the murderers and the masterminds who shot Mia more than 20 times in front of her .. daughter and her two-year-old twins and their nanny,” her colleagues at ELAC said in a press statement. “Such ambush in broad daylight by still unidentified assassins riding motorbikes fits the pattern of violence that has become an all too familiar scene that has petrified our nation.”

Investigators believe Mascariñas-Green’s death was linked to her legal work on a property-dispute case in Panglao, a resort island off Bohol. Police have pointed to the opposing party in that case, Lloyd Lancer Gonzaga, as the alleged mastermind of her murder and raided Gonzaga’s property on Friday. Gonzaga and an alleged accomplice remain at large.

Mascariñas-Green’s family and supporters recall her as a devoted advocate for the environment and for women’s and children’s rights. “From a young age, Mia always believed that everyone, young or old, rich or poor had rights and that ultimately the legal system would work for them,” her family said in a statement.

According to her family, Mascariñas-Green had received death threats in the past as a result of her work, reflecting the extreme risks facing activists in the Philippines. “She said that getting a death threat was to some extent just part of the job of being a lawyer … But she never backed down from any situation, dutifully doing her work and faithfully following the creed of her profession as a lawyer,” they recalled.

The murders of environment and other rights activists in the Philippines occur within a broader climate of impunity. According to Human Rights Watch, more than 7,000 Filipinos have been killed in a brutal anti-drug campaign launched during Duterte’s presidency. As of last month, HRW was not aware of any police officers being prosecuted for extrajudicial executions or other crimes related to the campaign. Under previous administrations, the country was also gained notoriety for un-punished killings of left-wing activists and journalists.

Mascariñas-Green’s ELAC colleagues said her death will not deter them from their work: “We honor Atty. Mia’s death with a renewal of our own vows to pursue the passion for the environment that she had left, and more than that, to fight the culture of impunity that has blanketed our society today.”

This story was first published on website Mongabay. The the original article.