Greener pastures: How Indian pastoralists are being aided to return to their traditional livelihood

Change is taking place in the way the Centre and state governments look at pastoralism; the belief that livestock management is done better in stable conditions is changing 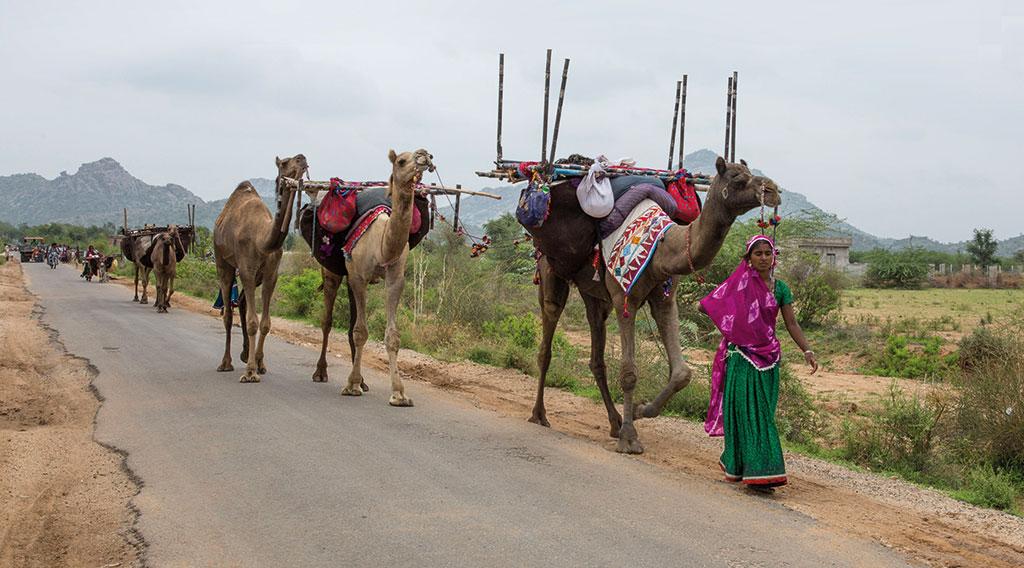 “In 2006, we had some goats, but it was getting difficult to earn enough money. So I took up a driving job to feed my family. But I hated it and it was taking a toll on my health. When the dairy was set up, I took the decision to buy three camels,” Mangal, who belongs to the Rebari pastoral community, found in scattered colonies across Gujarat and Rajasthan, said.

In the past four years, Mangal has increased his camel stock to 50 and today earns Rs 60,000 a month from selling camel milk to the dairy. He was earning Rs 8,000 a month as a truck driver.

Mangal said the utility of camels had reduced substantially after tempos reached the village. This is the reason, most of the community shifted to other livestock or quit pastorialism altogether.

The decision to set up Sarahad cooperative dairy has for the first time created a sustained demand for camel milk. But this transition has not been easy.

Dairies were initially hesitant because there are scheduling issues with the pastoralists. Also, they were not sure if the milk would meet the hygiene standards, said Ramesh Bhatti, programme director of the Centre for Pastoralism (CfP), run by Kutch-based non-profit Sahjeevan.

So, the non-profit, almost a decade ago, teamed up with the National Dairy Development Board in Gujarat and started procuring buffalo, cow and goat milk for pastoralists and supplied it to different dairies to establish the credibility of the community. And it worked.

In the past two years, at least 22 youngsters have returned to their villages and bought camels, Vasant Saberwal from CfP said. One of them is 18-year-old Jayesh Rabari, who left Bhuk Sanosura village in 2016 to study and eventually work elsewhere.

He returned during the COVID-19 pandemic and is now happily settled in his village. “I left because there was no future in pastoralism. But it has now become profitable. My family is earning Rs 80,000 a month by selling camel milk,” Jayesh said.

Pastoralism is one of the oldest and most sustainable food systems on the planet where herders, along with livestock, move from one climatic region to another every year in search of food, to take advantage of suitable pastures and grasslands, and to avoid extreme temperatures.

Experts say that globally, lands sustained by pastoralism form the largest carbon sink. Grazing of the pastures by herbivores stimulates regrowth of plants.

Very often, these routes are the only places in the landscape where you have natural vegetation, Francisco Martin Azcarate, professor, Autonomous University of Madrid, said.

While grazing, the animals disperse seeds through their dung. It also helps in preventing wildfires as grazing consumes ground level vegetation, he added. The lands where pastoralists move cover over half of the world’s earth surface and are thus the largest ecosystem, according to the UN.

Pastoralists are also the creators and guardians of different livestock varieties, carefully breeding animals with specific traits such as the ability to survive in drought-like conditions or walk long distances.

“The Raikar Rabari community in Rajasthan breeds Nari cattle which are reared only in the Aravalli hill range; in Telangana, the Lambada community breed the Poda Thurupu cattle which are able to survive the hot climate,” Bhatti said.

Of the 202 livestock breeds recognised by the National Bureau of Animal Genetic Resources (NBAGR) in Karnal, Haryana, 73 are reared and preserved by pastoralists.

India has a significant population of pastoralists. There are no official numbers, but according to organisations working with the communities, about 20 million pastoralists graze the country’s forests and grasslands.

Over the past few years, there has been a positive shift in the way pastoralism is being discussed in India, with the Central and the state governments becoming more responsive in their needs.

“Till now, pastoralism is not being recognised the way it should be. Sadly, we don’t even know the population of pastoralists in the country, their economy, the challenges they face, the impact they face due to climate change or their contribution to the country’s GDP. The cell will be formed soon and it work towards this,” Union Minister for Fisheries, Animal Husbandry and Dairying, Parshottam Rupala told Down to Earth.

In the formal institutions, the belief is that livestock management is done better in stable conditions, and pastoralists are looked down upon. This is definitely changing, said DK Sadana, former head of the animal genetic resources at NBAGR.

On August 23, 2022, the Department of Animal Husbandry and Dairying wrote to states with sizeable pastoral populations to focus government schemes on the welfare of pastoral communities.

Until now, the schemes pertaining to livestock were mostly geared toward farmers and the settled population of animal keepers. It says that the states may develop extension activities suitable for awareness generation in the pastoralist community and can avail Central assistance.

“Currently, we have no schemes for pastoralists. There are schemes for livestock and animal husbandry, but those are applied to the settled animal keepers and not the pastoral community, which is mostly included in schemes by the social welfare department,” Rupala said.

This is a significant shift in the government’s stance on pastoralists. A 2003 study by the Centre for Management in Agriculture, the Indian Institute of Management, Ahmedabad, the League for Pastoral Peoples, Germany, and the University of Greenwich, UK, mentions how the then Union Ministry of Agriculture and the Union Ministry of Environment and Forest have ignored the pastoral system altogether, even as mainstream society sees pastoralism as an outmoded way of life.

Change is also taking place at the state level and non-profits are playing a crucial role in the same. In 2010, Sahjeevan ensured the registration of the Banni buffalo and Kharai camel breeds with NBAGR.

Following this, the Gujarat government in 2012 commissioned the organisation to identify and characterise all pastoral breeds and register them. The work was completed in 2020, with nine new breeds of camel, goat, donkey, sheep, and horses being identified and registered.

In Bikaner, Rajasthan, non-profit Urmul Trust has built resting spaces and water structures along the pasture routes. Till date, 15 new water reservoirs have been constructed and one has been revived along the routes in four villages, in collaboration with gram panchayats.

CfP has embarked on a project to produce an atlas on Indian pastoralism to capture its scale and spread across the country. The idea is to map the traditional grazing routes across states.

“While doing the surveys in Himachal Pradesh (the pilot state), we found that at some point or another, pastoralists move in the entire state. It is remarkable visually and a powerful way of making a point. They are present throughout the state. We expect to develop the atlas over the next year and a half,” said Saberwal. The next states to be covered are Uttarakhand and Gujarat. 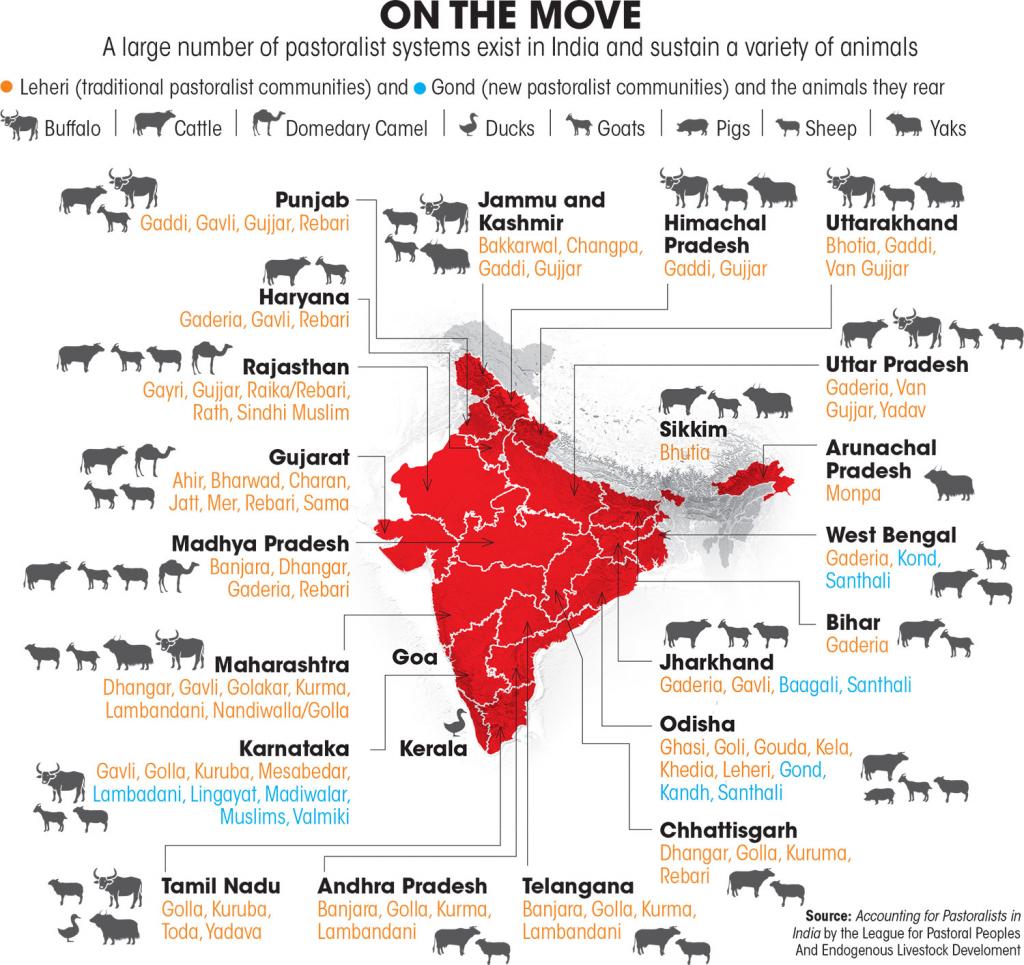 Like India, there is a growing recognition of the need for sustainable rangelands and pastoralism. The UN General Assembly this March declared 2026 the International Year of Rangelands and Pastoralists.

This happened after two years of deliberation and support from 60 countries worldwide.

“From South Asia, India, Bhutan and Afghanistan supported the resolution. We are hoping to see some active measures to support pastoralism in the run-up to the year as all countries that have supported the resolution have to focus their attention towards the pastoral system,” said Sadana, who facilitated the Regional International Steering Group for South Asia at the Assembly. This year also marks the 20th anniversary of the Dana Declaration on Mobile Peoples and Conservation.

In May, the Food and Agriculture Organization (FAO) released a handbook detailing guidelines for developing national legal and policy frameworks for pastoral mobility.

It calls for legal recognition of pastoralists’ right to move with their livestock within and across national borders, without hindrance for purposes of obtaining access to pastures, water, and other strategic livestock husbandry resources.

The report also touches upon the importance of pastoralism in the achievement of livestock-related Sustainable Development Goals. One of the goals requires countries to report on indigenous animals. Governments must use this to support its pastoral communities who play a cricual role in their preservation, saids Natasha Maru, editor of the FAO handbook.

Drove roads are routes used by pastoralists to transport livestock herds by foot from one location to another. European countries are also working towards supporting their pastoral communities.

Spain is running the Life Cañadas project to carry out conservation and ecological restoration of the 125-km-long drove road network in the country. Though legally protected under a 1995 act, they are heavily encroached upon.

Abandonment of drove roads started in the beginning of the 20th century when most sheep started to use trains or trucks to move between summer and winter grasslands. Today, sheep have stopped migration and are fed artificial food.

“A lot of this network is not functional and it is impossible for the animals to use it. We want to move to the transhumance model, which was very similar to what used to happen hundreds of years ago in Europe but is now extinct,” said Azcarate.

He adds similar small-scale projects are happening in other parts of Europe, like Greece and Italy.