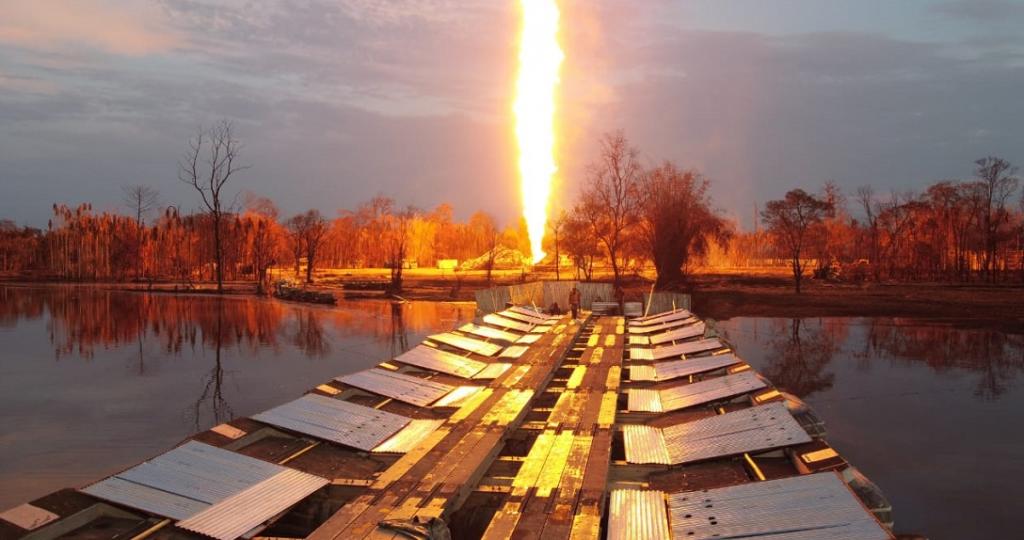 The Baghjan oil field has been burning since the last 160 days. Photo: @DDNewslive / Twitter

The Baghjan oilfield, along with 26 oil wells in Assam was operating without mandatory environmental clearances when one of the wells experienced a blowout May 27, 2020, followed by a fire, a National Green Tribunal (NGT) committee said November 3.

The blowout site, located next to the Dibru Saikhowa National Park (DSNP) in Tinsukia district, has been burning for 160 days. It continues to impact an area of 10 kilometres around the controversial Baghjan 5 oil and gas rig.

NGT’s principal bench headed by AK Goel, constituted a committee led by former Judge BP Katakey June 26 to investigate the cause and the impact of the blowout.

This was after Kolkata-based activist, Bonani Kakkar and Wildlife and Environment Conservation Organization, an Assam-based non-profit, approached the tribunal.

On November 3, Judge Katakey submitted a status report on the ongoing investigation into the cause and impact of the blowout. The committee has recommended payment of Rs 25 Lakh to 173 families and Rs 20 lakh to 439 families identified by the district administration.

The authorities found that 57 houses had been completely gutted during the explosion June 9, when the spilled gas condensates and crudes caught fire.

The committee found that a pregnant woman living in the vicinity had suffered a miscarriage. Similar instances of miscarriages were also reported among cattle and the endangered Hoolock Gibbon in the neighbouring forests.

Katakey made interim recommendations in the status report submitted to the tribunal in which it sought legal action against Oil India Ltd (OIL) for violating the Air, Water and Environmental Protection Acts.

“On the day of the blowout of well Baghjan-5 May 27 and explosion June 9, OIL did not have the mandatory consents including the Consent To Establish / No Objection Certificate and / or the Consent To Operate under the Water Act, Air Act and / or the Hazardous Waste [Management, Handling and Transboundary Movement] Rules, 2016,” the committee said.

OIL has claimed it had secured all the necessary environment and industrial clearances to operate near DSNP from the Baghjan oilfield consisting of 26 oil wells.

The committee, though, found OIL to have violated terms under which such clearance had been granted to it. On September 7, 2017, the Supreme Court permitted OIL to extract hydrocarbons from near the DSNP while delivering the landmark verdict of the TN Godavaram case.

The case acts as a deterrent to any kind of industrial activity near protected areas such national parks and wildlife sanctuaries.

The apex court granted a conditional approval to OIL, stating that the company should carry out a biodiversity impact assessment before commencing extraction of hydrocarbons.

The Katakey Committee found that OIL did not carry out the assessment nor did it approach the apex court, seeking a final clearance for its extraction activities near the DSNP.

“Such actions place OIL in continuing contempt of the directions passed by the Hon’ble Supreme Court of India, specifically its order dated September 7, 2017, granting conditional approval to OIL to undertake the present extraction of hydrocarbons from the proposed wells including the well Baghjan-5,” it added.

The committee also stated that OIL had violated the directives of the Central Pollution Control Board (CPCB).

On March 7, 2016, the CPCB classified both, on-shore and off-shore oil and gas extraction including coal bed methane red category industries and prohibited their operations in ecologically fragile areas / protected areas. The Assam government adopted these directions in 2019.

“Thus, the continuing extraction of hydrocarbons around the DSNP would qualify as a Red category project, having it been declared as an eco-sensitive zone would place it in clear violation of the [Assam Government’s] notification dated May 4, 2019,” the committee noted.

The present violations by OIL will also impact future plans to extract hydrocarbons from underneath the DSNP through seven proposed oil wells. These are to be laid horizontally across Dangori river, a tributary of the Brahmaputra.

“Such omissions on the part of OIL meant clear violations, not merely of the statutory mandate but also the conditions that have been stipulated under Clause 10 (ait) and (v1) of the Environment Clearance dated 11.05.2020 with respect to the extension drilling and testing of hydrocarbons at seven locations under the National Park Area, where the blowout and subsequent fire occurred with respect to well Baghjan-5,” the committee said.

The committee has recommended that the PCBA should be directed to take legal action against OIL for violating various environmental as well as industrial regulations.

Curiously, PCBA did issue closure notices against OIL in June, after the blowout incident, only to retract them within a week.

The committee is likely to submit a final report by December 15, even as protests continue in Upper Assam against the violations committed by OIL and others.