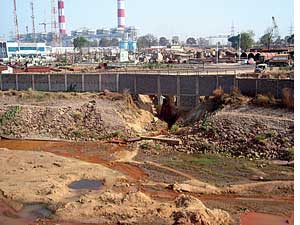 Company increases effluent outlets instead of plugging them

THE Orissa state pollution control board has issued notice to the Jharsuguda unit of Vedanta Aluminium Limited (val), a subsidiary of the mining giant Vedanta Resources Plc, after inspections revealed the company's aluminium smelter and captive power plant are polluting the air and water in the area.

The notice was issued on July 13 after the board noted that the company did not clean up its act in spite of repeatedly being asked to rectify the problems. During the first inspection in April, board officials noticed that the emissions, coal combustion ash and dust, from the five units of the 675 MW power plant were high. The concentration of particulate matter at various monitoring points was found to be higher than the prescribed upper limit of 100 mg/m 3. During subsequent visits in June and July, it was found that the electrostatic precipitators in the chimneys that prevent emissions had not been set right.

The company was also hauled up for discharging wastewater from its smelter without any treatment. This wastewater eventually finds its way into the Hirakud reservoir via Bheden river.

The Board's April report had noted that stagnant water in the drain garlanding the aluminium smelter contained high fluoride contamination--312.2 mg per litre as against the permissible limit of 2 mg. Wastewater from the plant was directly discharged into the Kharkari drain at two points. The drain flows into the Bheden river that joins the Mahanadi. The Power plant's ash pond too had heavy seepage in its embankment that was also polluting the drain. The board found the fluoride contamination was high--6.44 mg per litre--in the drain where wastewater seeps into the drain. The ash from the plant was found dumped all along the drain.

During the July inspection, the board officer noted that effluents were discharged through three outlets from the smelter and two from the power plant. Rather than preventing the discharge of untreated effluents, the company had increased the number of outlets through which effluents were being discharged between April and July. When contacted, company spokesperson Shashank Pattnaik said Vedanta would comply with the pollution board's directions.