At Karanpur village of Rajasthan’s Jaipur district that has been hit by locust swarm. Photo: Ishan Kukreti

This story has been corrected on June 15, 2020 to reflect that LWO stands for Locust Warning Organisation, and not Locust Watch Organisation. It was originally published on May 27, 2020.

Firemen Rajesh Chaudhary and Rohitash Yadav of the Rajasthan fire department had been out on the roads of Karanpur village in Rajasthan’s Jaipur district since late May 26 night — spraying insecticides from their fire engines at the swarm of desert locusts that had invaded the area.

The two, along with three other state fire engines with four personnel each, had been spraying a solution of insecticides chlorpyifos (2 ml per litre) and lambda cyhalothrin (1.5-2 ml per litre). Six tanker sprayers of Ulvamast (a vehicle-mounted sprayer for control of migrant pests such as locusts) were also at work.

In a mini-programme in the middle of the most restrictive lockdown, at least 30 people from Locust Warning Organisation (LWO), the central government agency as well as state agriculture and horticulture departments managed to destroy a five-kilometre long swarm of locusts, which had taken residence at Mahar Kalan of the village on May 26, 2020 evening.

A drone was also employed to spray the insecticide on the hillocks of Aravalli that borders the town from one side.

Down to Earth reached the village at 4:30 am. It was hard to tell if there was anything more than a few random locusts flying around. But as soon as the sunlight hit the trees, thousands of locusts burst out of the canopies, blinded by chemical sprays and eager to fly away. 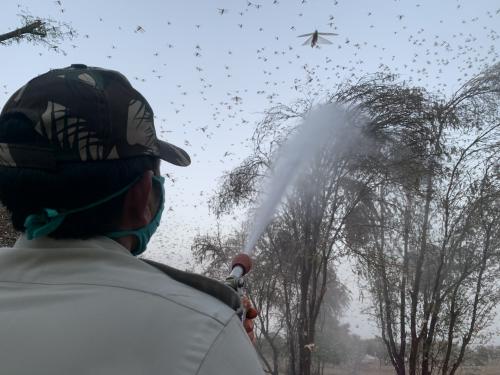 “The swarm — 18 km x 10 km big — entered India on May 22. It first moved to Nagor district, where we destroyed a part of it. The remaining came here,” said an official of the LWO.

The official had been at the site since 2 am.

The area hasn’t been cultivated so far — the locusts are feeding on the leaves of babool and kikad trees. The pest is pink in colour, which means members of the swarm are not sexually mature yet.

The younger pests tend to sit on taller trees as compared to crops, making it difficult to manage them.

“The younger ones get agitated and fly away as soon as you go near them. They tend to stay on the ground and move less once they mate. It’s easier to spray on them then,” said said BS Yadav, assistant director, agriculture department, Jaipur. He added that these pests are like “children, full of energy, they start their settled life after they mate”.

“It is unusual for the younger locusts to arrive at this time. Usually the yellow-coloured sexually mature locusts come first,” he added.

These desert locusts are breeding 400 times than usual due to favourable climatic conditions, a report by the Food and Agricultural Organization recently stated. 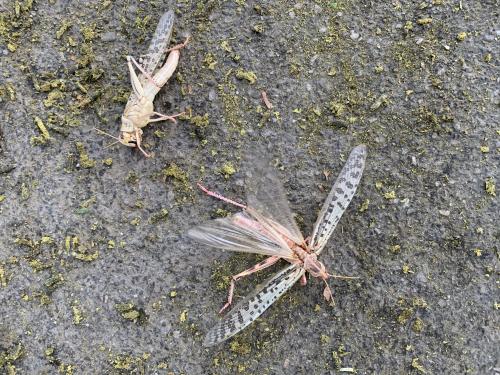 The locusts were feeding on the leaves of babool and kikad trees. Photo: Ishan Kukreti

The swarms of younger pests arrived in India due to untimely rains in Iran, which has leading to high breeding rate of the pest. A similar spread had last occurred in 1993, when the pest reached MP's Dhar district.

“I have only heard my grandfather talk about locust attacks. I have never seen anything like this,” said Sachin Yogi (24), a wedding photographer.

Others, particularly the farmers, were concerned about kharif crops.

“We have to start sowing bajra crop now. We are waiting for the rain. If the swarms come again, it’ll be a disaster,” said a farmer.

The lockdown has also put government officials in a fix. While the central team from LWO has been facing problems finding a place to stay and food to eat, the local administration from Jaipur is finding it hard to simply enter villages.

“Villagers are suspicious that we will spread COVID-19,” a district official said. Another added that the central government should declare locust attack a national disaster. “The resources can be mobilised as they are being done for COVID-19,” he said.

The locust attack, given its historic magnitude, poses a serious threat to food security of the country. The World Bank has already approved a record of $500 million for countries such as Kenya, Ethiopia, Uganda, Djibouti, Yemen, Somalia, etc to deal with the pest.