Manpower minimised, water used in the process recycled; environmentalists hail the model, but implementation under cloud 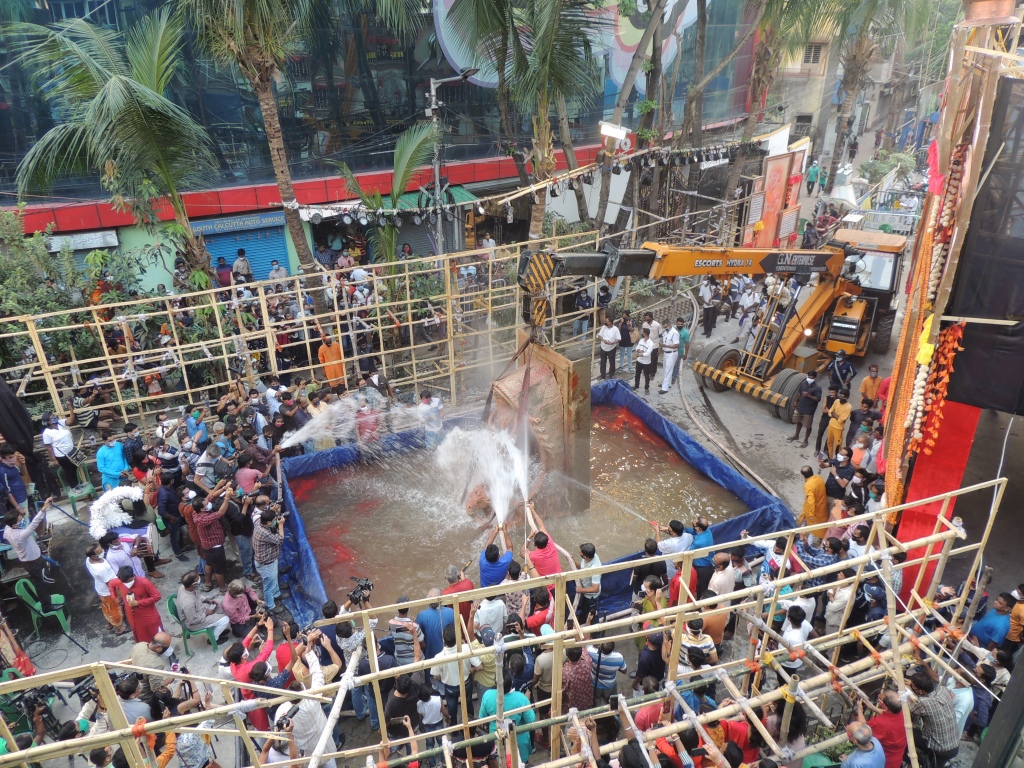 Idol immersion in Kolkata has turned a new leaf in the wake of the novel coronavirus disease (COVID-19) pandemic through the ‘wash-and-melt’ model. Tridhara Akalbodhon, a club in south Kolkata, used water jets to melt its durga idols instead of immerising them.

Environmentalists, too, have hailed the model as environment-friendly.

The idols were positioned through a crane within a makeshift 400 square feet water body created adjacent to the pandal. Around 25,000 litres water was used to immerse five idols. The whole process took around two hours.

The clay was melted after immersing the idol. As a result, the colour peeled off, partially baring the inward frame. The water was then recycled to repeat the process.

The frames were taken to the solid waste disposal site at Dhapa on the eastern fringes of the city, where idols that were immersed in the Hooghly under conventional methods.

“We decided on this unique method due to COVID-19-induced restrictions. Our cost as well as involvement of manpower was severely minimised,” said Debasish Kumar of Tridhara Akalbodhon.

Kumar added he took the cue from the Naihati Kalipuja immersion. He is also a member of Kolkata Municipal Corporation’s (KMC) board of administrators and in-charge of overall immersion within Kolkata. 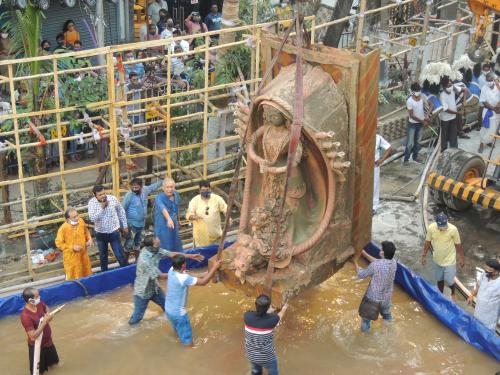 In Naihati and adjacent Bhatpara in the northern fringe of Kolkata, idols were melted with jet sprays after darpan bisarjan, as part of which water from the Ganga is symbolically poured over the goddess’s reflection in a mirror.

“It’s a very good initiative and we will be happy to go ahead with it if KMC wants to expand it in future,” said Kalyan Rudra, chairman of West Bengal Pollution Control Board.

Environment activist Subhas Datta said the model may help control water pollution in the Ganga. He added that the Tridhara model could be replicated in other states as well.

Firhad Hakim, chairman of board of administrators in KMC and erstwhile mayor, told DTE that KMC would consider expanding the scope of ‘wash-and-melt’ model in the coming years.

A few other immersion models were attempted in West Bengal after receiving a push from the National Mission of Clean Ganga (NMCG) Act.

Rudra said they set up a barricaded immersion zone within two large water bodies in South Dumdum municipality adjacent to KMC to ensure environment-friendly immersion. The base of these water bodies were lined with synthetic cover to arrest diffused pollutants, said Rudra.

Hoogly Chinsurah municipality laid a rail system to wheel the idols without much manpower before immersing them in the Ganga, from where the idols were removed by drawing the ropes tied with structures.

But the overall picture is not that rosy: Idols from nearly 37,000 pujas in the state — 40 per cent were held within Kolkata Metropolitan Development Area (KMDA) — were either immersed or would be immersed in the Ganga. 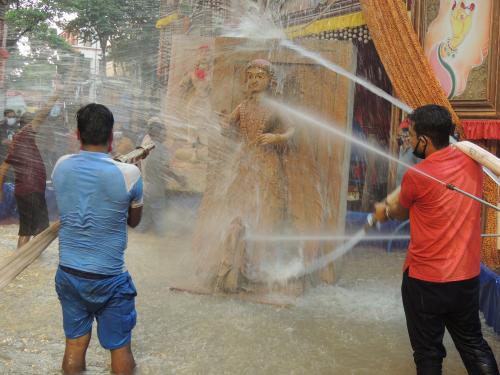 At least 2,500 idols were immersed October 26 and 27 in the Ganga at 17 ghats. Only three of these ghats had systems to lift idols immediately using mechanical devices such as cranes.

“The system of immersion is not adequate as per the NMCG guidelines in most KMC ghats, particularly the north Kolkata ghats,” said a PCB official.

The concentration of toxic heavy metal pollutant such as lead would earlier increase by almost four times due to immersion, according to Krishnajyoti Goswami, professor at Lincoln University College, Malaysia.

“This figure was around 37 times above World Health Organisation (WHO) prescribed guidelines,” he added. Goswami had analysed the immersion pollution between 2015 and 2017, the results of which were published in the Indian Journal of Applied Research.

Various other studies, including that from the Central Pollution Control Board, have earlier shown that the pollution levels increase manifold due to immersion of thousands of idols in the Ganga.

The NMCG, a union government agency, and National Green Tribunal have been pushing to stop immersion within open stretches of river since 2017.

“The idol immersion points should be cordoned off and barricaded. Synthetic liner may be placed in the bottom well in advance,” the NGT order dated October 6, 2017 read.

West Bengal environment department, subsequently in 2018, published a notification reiterating the NGT directive based on CPCB and NMCG guidelines.

“We found that apart from flowers, other idol materials such as coloured ornaments, etc were not being removed from idol structures as per the laid-down norms. The arrangement of immediate lifting of idols from river was only restricted to few immersion points,” pointed out a PCB official monitoring the immersion.

A senior state government official said common people associate sentiment with the immersion process, and hence, the method needed to be taken up through societal movement. “Only regulatory actions may prove counterproductive,” the official said.

“All said and done, Tridhara pond immersion method is just a standalone initiative. Unless it is adopted under the law, we cannot save Ganga,” said a member of Sabuj Mancha, a platform of green organisations.