COVID-19: Will Bengal come out of Pujo season unscathed

The Calcutta High Court was forced to step in to bar people from pandals; but is it enough? 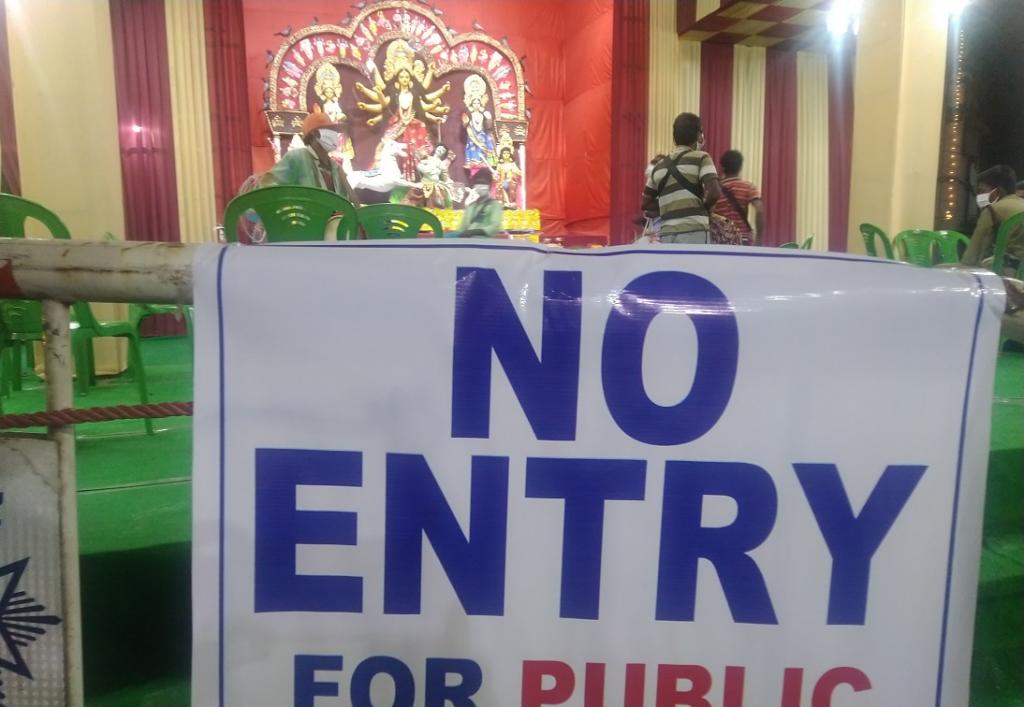 The ongoing novel coronavirus disease (COVID-19) pandemic and a low-pressure area that formed over the Bay of Bengal October 20, 2020, is bound to make this year’s Durga Pujo in West Bengal a very different affair.

The state has been faced with a dilemma ever since the festive season began a month back. Should it or should it not celebrate its biggest socio-religious festival?

Politicians of all hues have refused to stop organising the festival with its usual fervour, mindful of the forthcoming elections in the state.

The number of COVID-afflicted patients per day has increased in Bengal by more than 20 per cent since the festive season began. The increase of active patients has become one of the highest in the country.

Union Minister for Health and Family Welfare Harshvardhan said October 19 that community transmission had started in some densely populated parts of West Bengal.

The Calcutta High Court was forced to step in October 19.

A division Bench comprising Justice Sanjib Bandopadhyay and Justice Arijit Bandapadhyay pointed out that the state lacked any blue print to stop mass gathering during Pujo.

It directed a blanket ban on the entry of visitors in any pandal, terming them as ‘No entry zones.’ This was to minimise gatherings within enclosed areas and prevent a potential surge of COVID-19 cases post-Pujo.

The bench modified its order October 21, based on appeals of puja organisers, but without any significant relaxation. Visitors are to be stopped at a distance of 10 metres in case of larger pandals. The distance will be five metres for smaller pandals.

The bench allowed 60 representatives of various clubs to enter the pandal through the day. But only 45 people are allowed at a time.

“We welcome the order; but will it be properly implemented?” Naba Dutta, a social activist and Narain Jain from non-profit, Concern for Calcutta, asked.

“We have seen how the judicial order got completely violated at Rabindra Sarobar lake in Kolkata when thousands entered the lake area to observe Chhath Puja. This despite the National Green Tribunal categorically banning such activity,” they added.

A civil society initiative led by Dutta in Kolkata saw more than a hundred banners being put up in the city urging people not to go for pandal hopping and avoid gathering during Pujo days.

At least two letters from public health experts and social activists to Chief Minister Mamata Banerjee and also to political leaders, expressed serious concerns about the potential consequences of Pujo being observed in a business-as-usual way.

“We have written to the chief minister, chief secretary and to all political parties. But so far, no one has responded. It effectively means they would like to indulge in business-as-usual Pujo festivities despite knowing the risk and consequences,” Hiralal Konar, one of the conveners of the Joint Platform of Doctors said.

Konar said if the concerns expressed by physicians proved true post-Pujo, political parties, both in power and opposition, would have no right to accuse one another and shift the onus.

Sukumar Mukherjee, veteran physician and a member of government, admitted that mass gatherings and pandal hopping during Pujo would prove disastrous.

“Already, the gatherings for marketing at public places is going overboard. If we cannot stop the trend during Durga Pujo, the situation is likely to deteriorate,” Mukherjee told this reporter.

“The number of active cases are rising. The number of deaths is hovering constantly around 60 per day and the infection rate is still around 8 per cent,” Mukherjee pointed out.

He admitted that political parties should have come out in the open to discourage the trend.

“The health infrastructure is already under huge stress. Many doctors and frontline health workers have been affected. Some have lost their lives. If we unnecessarily invite a COVID-19 wave by design, the situation may completely spin out of control,” Dulal Bose, physician and former sheriff of Kolkata, warned.

“Only lip service will not do. Just depending on public awareness will not make much headway to counter the pandal hopping. Administrative and political will are important,” Manas Gumta, secretary of Association of Health Service Doctors, said.

Kunal Sarkar, a cardiac surgeon associated with a frontline private hospital, said the availability of beds in hospitals had already nosedived as the number of COVID-affected had gone up in the last couple of weeks.

He warned that Pujo pandals, having many people in an enclosed area, could act as ‘super spreaders.’

Ajoy Sarkar, head of the COVID-19 unit in another private hospital, pointed out how the critical care support, including ICU beds and ventilators, had been dwindling with every passing day.

Political parties, across the spectrum, criticised one another, but chose not to categorically counter the Pujo celebrations amid COVID-19.

“The chief minister does not consult with anybody,” Sujon Chakrabarty of Communist Party of India (Marxist) told this reporter on being asked to take a formal stand to oppose public celebrations.

“This should have been stopped, but that is my personal view,” Congress leader Pradip Bhattacharya, said. A BJP leader shifted the onus to the government saying this was an administrative responsibility.

“Considering the economy, Pujo cannot be stopped. The government is doing everything possible to counter the trend, but at the end of the day, it is the people’s decision,” Santanu Sen, Trinamool Congress member in the Rajya Sabha, said.

“With elections closing in, none of the political parties want to take a stand. It is unfortunate that the court has to step in a matter that should have been settled by politicians and the administration in a proactive manner,” Biswajit Mukherjee, a retired chief law officer of the state environment department said.