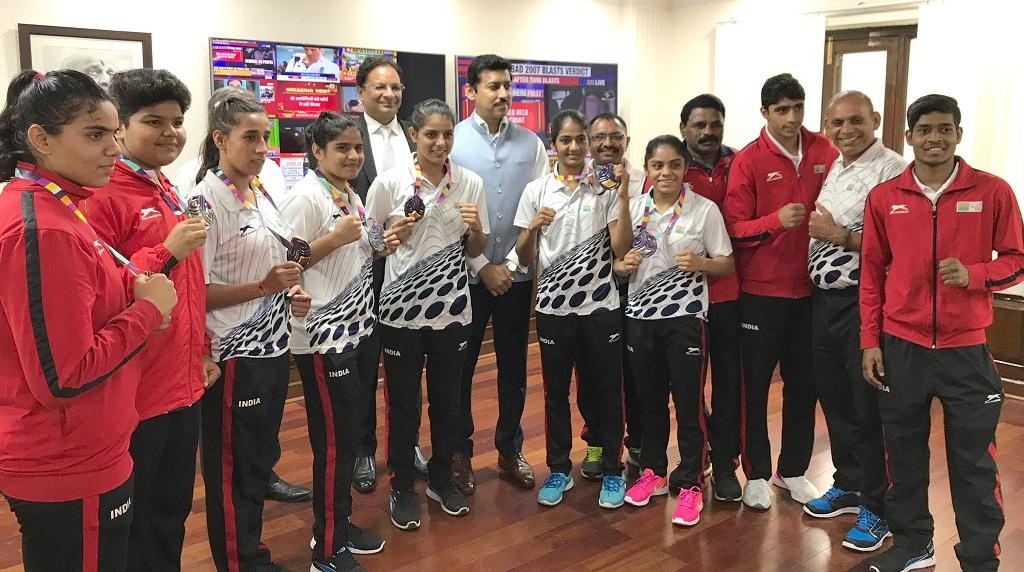 Minister for Sports, Rajyavardhan Rathore with some of the sportspersons who were part of the Asian Games contingent Credit: Press Information Bureau

Once again, Indian sportspersons from certain parts of India have dominated the medals tally at the recently-concluded Asian Games at Jakarta-Palembang.

Asiad 2018 has been India’s best overall medals tally. The contingent brought home a total of 69 medals—15 gold, 24 silver and 30 bronze. The total of 24 silver medals is also the highest ever in Asiad history for India.

The interesting part though is the breakdown of the medals haul and the contribution from each state. This time, sportspersons from as many as 21 states have bagged medals.

Haryana won a total of 18 medals at the Games, the largest among all states. These included 5 gold medals, 5 silver and 8 bronze.

Next up is Tamil Nadu, with 12 medals—5 silver and 7 bronze. It is followed by Uttar Pradesh, Delhi and Kerala, each with a total of 9 medals. Maharashtra (7), Karnataka (6) and Punjab (5) are next.

Tribal athletes again bagged medals in these games also. Sarita Gaekwad, daughter of a farm labourer who was part of the women's 4X400 relay team which won gold at Asiad, hails from a remote village in the tribal-dominated Dang district of Gujarat.

So why do these sportspersons perform well in every sports event?

Take the case of Haryana, which produces fine wrestlers and boxers. This state, with just 2 per cent of India’s population, alone accounts for 20 per cent of the Indian Olympic contingent. Boxing coach Jagdish Singh puts it down to its farming culture. “Haryana largely practises rain-fed agriculture. People have to perform extreme physical labour to grow crops. As a result, they are stronger and more physically fit than people in other parts of India,” says Singh of the National Boxing Academy in Rohtak who has coached Vijender Singh in the past. “Another reason is government support. The previous Congress government provided a lot of financial incentives and encouragement to aspiring boxers.”

Anthropologist Joseph Alter would remind you that Haryana is a Jat land with old wrestling tradition. Jats form 30 per cent of Haryana’s population. Wrestlers in India come from regions that have historically been centres for patronage under the former princely states of India. Haryana as well as Maharashtra, Punjab and eastern Uttar Pradesh have strong martial traditions, and this is supported by caste group masculine identity, as in the case of Yadavs in eastern Uttar Pradesh and Jats in Haryana, says Alter who has extensively studied wrestling in India.

As for the good performance of tribals, Ganesh Narayan Devy, a tribal rights activist and linguist, says the reason is sociological and psychological, and not physiological. “Tribals are not too self-conscious of their body as a social entity. They are nurtured by their societies for discipline, endurance and tolerating hunger and pain. Being nurtured for endurance, they perform very well in athletics. But if you ask them to play golf, they will not be successful.” Agrees Virginius Xaxa, a tribal expert at the Tata Institute of Social Sciences in Guwahati. “Indian tribals mostly inhabit hilly, forested areas. They have to walk miles to go to other places. This makes them sturdier. Moreover, tribals have evolved engaging in hunting and collecting food. This makes them great outdoor persons, with a special affinity for sports,” he points out. “Tribal societies, especially in the Northeast, are also communal in nature. They engage in collective activities from repairing houses to working in the paddy fields. This is another factor for their sporting attitude.”

And why do tribal girls perform well? “There are no restrictions on girls in tribal societies. They are given equal opportunities. That’s why we see female sportsmen from tribal communities,” explains Xaxa.