World Bicycle Day 2020: Time for the humble cycle to take a bow as a friend of the working class

When India’s countrywide lockdown brought out hundreds of thousands of migrant workers, one popular symbol of the pre-Liberalisation decades made a come back to the discourse: The humble bicycle. As the world observes World Bicycle Day on June 3, 2020, to highlight how good it is for the environment as well as physical fitness, workers in different parts of the country are trying to pedal back their way home.

Sales have increased: Rahim Khan, who sells bicycles in Odisha’s Kendrapara district, said he sold 20 of them in one day two weeks ago to stranded workers from West Bengal’s Murshidabad district.

For the workers, it eats into their meagre savings. But they have been left without much option — evicted from accomodations as they couldn’t pay rent as regular income dried up. Those who couldn’t afford even bicycles had to walk in the scorching summer sun. Many of those who did buy the bikes had to borrow or sell valuables.

To add to their troubles, roads and highways across India are built for large vehicles. Cyclists, as a result, face issues. Bicycles are lightweight, making it easy to push them off balance from speeding vehicles.

Jyoti Kumari, a 15-year-old girl was in the news recently, as she was forced to cycle 1,200 kilometres from Gurugram to Bihar in a span of eight days with her ailing father in tow.

The Cycling Federation of India offered her a trial to become a trainee at the National Cycling Academy in Delhi.

Udaya Kiran Das, 30 and his wife Mamata Das, 26, from Ambasala village in Odisha’s Jagatsinghpur district were forced to cycle around 1,300 km from Chennai to reach their village last week. 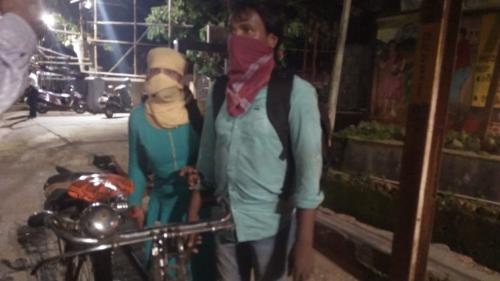 Udaya Kiran Das and his wife Mamata from Odisha’s Jagatsinghpur were forced to cycle 1,300 km from Chennai to reach their village Photo: Ashis Senapati

Cycling, however, remains the most environment-friendly mode of transport as cities in the past decades have faced rising pollution levels because of the increase in the number of vehicles.

Governments should earmark tracks for cyclists on roads and highways, said Biraja Pati, an environmentalist and the president of non-profit Nature’s Club.

Safe infrastructure for walking and cycling is also a pathway for achieving greater health equity, according to the World Health Organization (WHO).

Demand for more mobility and exercise during the lockdown has forced several people to ride bicycles. Many are now aware about eco-friendly ways of transportation, as bicycles also help keep them fit and conserve the environment.

Bicycles are also a potential alternative mode of transport for those who use crowded public transport systems.