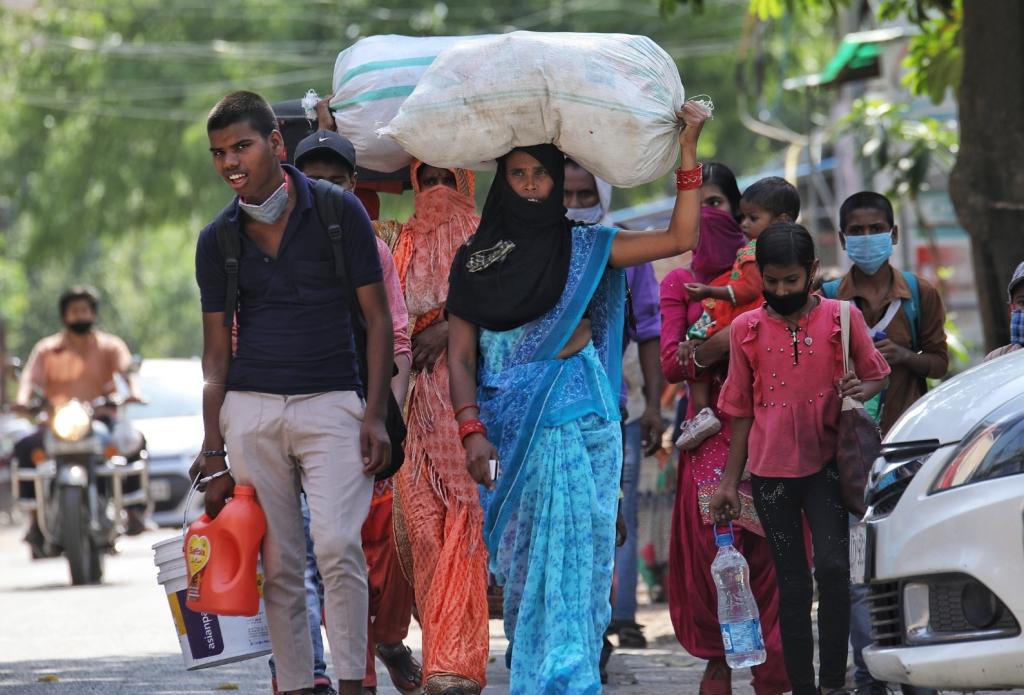 67 per cent of 1,963 migrant workers surveyed are still stuck in the same place since the lockdown was announced. Photo: Vikas Choudhary / CSE

Eighty per cent migrant workers surveyed by Stranded Workers Action Network (SWAN), do not have access to government ration two months after the COVID-19 lockdown indicating food distress among stranded migrants to be as high as the first phase of the lockdown.

The results are based on 821 distress calls received by SWAN between May 15 and June 1, 2020, corresponding to 5,911 migrant workers from across the country.

The report also shows that out of those who left for their homes, 44 per cent took buses while 39 per cent managed to get on a Shramik special.

While 11 per cent took trucks, lorries and other such modes of transport, six per cent made the journey on foot. Since April 29, the Union Ministry of Home Affairs has issued seven different travel orders for migrant workers.

The report termed the ministry’s measures a “maze of obfuscating orders that have created more chaos, destruction, and deaths”.

Travel arrangements were abysmal and this meant many migrants decided to escape the distress on cycles or in cramped lorries and many decided to walk thousands of kilometres, it added.

“The travel travails of workers further underscore the trauma that they have been subjected to by the state machinery,” the report said.

It narrated stories of different workers facing challenges like eviction by landlords and employers coupled with travel uncertainty, paying to fill travel forms, and no prior information about trains.

Other challenges included poor facilities on trains especially access to food and water, no trains from smaller towns and between certain locations and dynamic pricing of IRCTC tickets coupled with non-availability of Shramik trains.

At least 67 per cent of a total 1,963 migrant workers surveyed are still stuck in the same place since the lockdown was announced. The highest number of stranded workers are from Bihar.

Out of those who have returned, Jharkhand has the highest proportion of migrant workers who have reached home or are en route. Of those who are stuck, 55 per cent (out of 1,166) want to go home immediately.

This figure is higher than when the same set of workers were asked the question at the end of April when 33 per cent wanted to leave immediately after the second phase of lockdown ended.

“This flies in the face of government claims that most migrants have returned home and that Shramik trains are no longer needed,” the report said.

“The desire to return home immediately is not being driven by sentiment alone as the narrative that has been whipped up by some media houses and officials suggests,” it said.

This was because 75 per cent (of 1,124) who were still stuck in places they had migrated to for work, did not have any employment, according to the survey.

About 63 per cent of people who called SWAN since May 15, had less than Rs 100 left with them. About 57 per cent of the people sent in ‘SOS’ calls with no money or rations left or had skipped the previous meal.

This is a sharp increase of seven percentage points from the second phase of lockdown.